iOS 7 Compatible Multitasking Jailbreak Tweak – Kill All the Apps with One Tap!

A new iOS jailbreak multitasking app has been introduced after the recent evasion7 launch. With the iOS 7 came smarter multitasking where you can reduce a lot of system resources by killing the background apps. A feature which actually didn't work on earlier operating system versions. 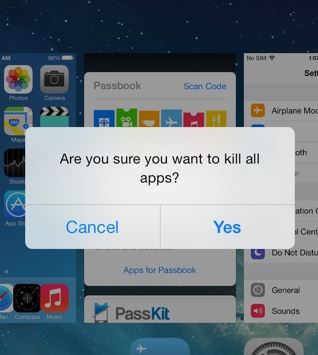 But killing apps running in the background is not that easy. Okay it is, but still not that convenient. You have to actually swipe up each single app to kill the app or at most three at a time. However, as aforementioned, the new iOS 7 jailbreak multitasking app named Purge will make this a lot easier. Of course this tweak will only work for you if you have a jailbroken device.

To kill all the apps, all you have to do is tap and hold on any app card in the iOS 7's multitasking app switcher. Ta da! You can get Purge for free on Cydia; the tweak is only available for iOS 7.

Customize Your Notification Badges with these iOS 7 JB Tweaks