Zeppelin Jailbreak Tweak has now been Optimized for iOS 7!

Although it is now very much easy to jailbreak your Apple device, it is almost useless if you do not find any compatible iOS 7 apps, mods and tweaks. However, we are finding more and more iOS 7 optimized tweaks and apps regularly. The recent addition is the very famous jailbreak tweak "zeppelin". 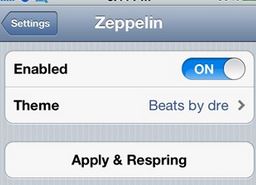 Zeppelin tweak is used to switch your logos to custom fun ones; more interesting and personalized experience. From your device's Settings you can change the carrier icons to more funky symbols. You can install a ton of these logos using add-on packages from Cydia store; a dozen or so logos are included with Zeppelin iOS 7. The following logos are currently available in Zeppelin iOS 7:

Unlock Your iOS Device with Gestures – How to

Get Multi-Window Multitasking on Your iPad without Waiting for the Next Gen iPad!