Civilization VI: Rise and Fall Rounds Out Its New Civs With The Zulu and Mapuche 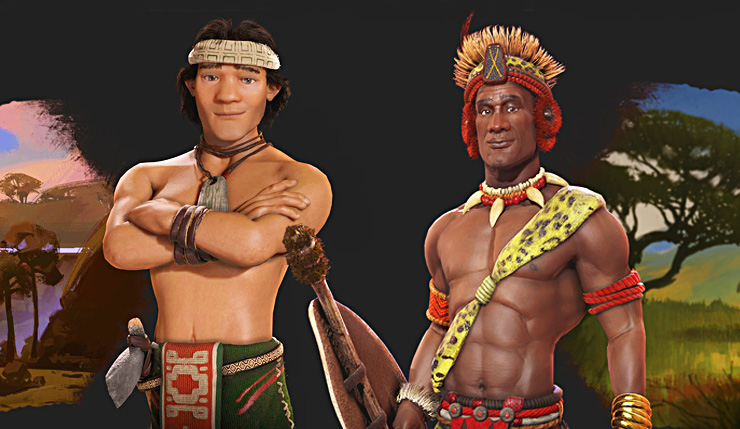 The newest civilization to be announced are the Zulu under Shaka. The Zulu are a Civilization staple, having appeared in every game in the series to date, with Shaka always being their leader. Most fans expected Shaka would be part of the Rise and Fall expansion, but Firaxis took their sweet time confirming it!

Here’s the official description of the Zulu under Shaka:

Unquestionably one of military history’s greatest commanders, Shaka’s reforms to the Zulu armies gave them efficiency, organization, and lethality – making the impi one of the most feared forces in the world. Equally notable is Shaka’s wrath, which resulted in thousands of lives lost on the African continent.

Shaka’s reign was not uncontested. There was substantial opposition to his policies within his own kingdom. Escalation of warfare between tribes into near-extermination were a marked change from previous patterns of war. Tensions were exacerbated when Shaka granted European traders concessions. But it was the death of his mother in 1827 that seems to have marked the beginning of the end of Shaka and the bloodiest part of his reign.

The meteoric rise of the Zulu under Shaka, coming at a time of increasing European colonization in the region, had a profound and complex impact on the history and culture of Southern Africa, whose implications are still debated and considered. Shaka’s legacy as a ruler is not a simple one, even within Zulu culture today. But his impact on the history of the world is beyond question.

The powerful warrior regiments of the Zulu were already a formidable force when the ambitious Shaka taught them new techniques: combining the iklwa (a short stabbing spear with a broader blade than a throwing spear) and the ishlangu (a large, oval shield with cowhide layered on top). These Pikeman replacements have an increased flanking bonus, are less expensive than other combat units of the same era, have a low maintenance cost, and earn XP faster.

The ikanda (also known as a “kraal” or “umuzi”) were self-sufficient, fortified Zulu homesteads. These encampment replacements provide additional housing. Once Civic or Technology prerequisites are met, Corps and Armies can be built outright. This also leads to faster Corps and Army creation.

A tribe, once conquered, was subordinated into the Zulu kingdom, its young men were incorporated into the ibutho, and then the Zulu marched on. After Shaka conquers a city, it gains bonus Loyalty when garrisoned. Conquering a city with a unit will upgrade it into a Corps or Army.

The Zulu definitely look like a great choice for those who like to play an aggressive game. In particular, they seem well suited for those jerks who like to start wars and claim lots of territory early. So yeah, start building walls quickly if your opponent picks Shaka.

But wait, that’s not all! We didn’t get around to updating you on last week’s civ reveal, the Mapuche under Lautaro, so we'll do it now. The Mapuche, an indigenous group native to Chile and Argentina, have never appeared in a Civilization game before.

Here’s the official description of the Mapuche under Lautaro:

Imagine leading a rebellion against an invading force – as a teenager, no less – then remaining a rallying symbol for your people hundreds of years after the fact. Lautaro, revered among the people of Chile as the Toqui (a war chief or, literally translated, “axe-bearer”), defied Spanish Conquistadors, escaped enslavement and cemented his legacy while facing overwhelming odds.

Today, Lautaro is among the most famous military leaders in Chilean history, considered by many to be the nation's first true General in light of his battlefield tactics. The overwhelming forces of the Spanish did little to slow Lautaro's determination, and his efforts spurred a period of resistance that lasted for nearly three centuries after his passing.

Due to Lautaro’s time enslaved to the Spanish, the Mapuche quickly learned how to use horses, turning one of the greatest Spanish advantages against them. The mounted malon raiders—so named for their retributive attacks on invaders—would launch quick raids to harass an enemy, before leading a responding enemy into an ambush. As a result, this unique Renaissance Era unit gets combat bonuses when fighting near friendly territory and pillaging costs less movement.

The Mapuche erected great wooden tombstones to remember their dead. Not only do these structures provide culture equal to 75% of a tile’s appeal, later in the game, the Mapuche benefit from a tourism boon thanks to chemamull.

True to his name, Lautaro found ways to probe and exploit weaknesses in the Spanish Conquistadors’ cavalry. As such, defeating an enemy unit in their own territory decreases the Loyalty of the owning city.

As a war chief, Lautaro successfully took the fight to a superior force by rallying the Mapuche people. You’ll get a bonus while combatting civilizations already in a Golden Age. All units trained in cities with an established Governor gain more experience in combat.

It looks like the Mapuche will largely be a defensive civ, with the ability to frustrate even powerful invaders. They ought to be a decent choice for players who prefer to just to keep to themselves and plug away on Culture and Science victories.

And with that, all nine new Rise and Fall leaders have been revealed! In addition to the Zulu and Mapuche, we’re getting Korea under Queen Seondeok, the Netherlands under Queen Wilhelmina, Mongolia under Genghis Khan, India under Chandragupta, the Cree under Poundmaker, Georgia under Queen Tamar, and Scotland under Robert the Bruce.