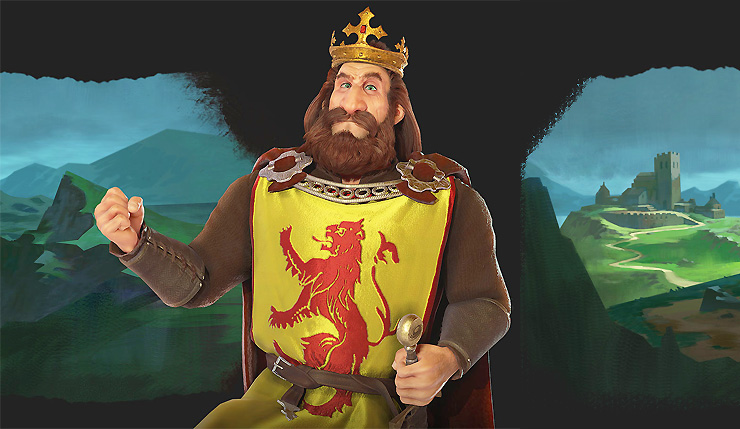 The newest addition to be announced is Scotland under Robert the Bruce. This is the first time Scotland has been included in a core Civilization game, which is more than a little surprising. Then again, the Irish have never been in either – guess Sid Meier is a bit of an Anglophile.

Here’s the official description of Scotland under Robert the Bruce:

“Born among the Scottish aristocracy, Robert the Bruce is best remembered for his stalwart leadership of Scotland during the nation’s war for independence with England in the late 13th century. Robert successfully claimed the throne of Scotland and led his people to victory over the rule of England.

Robert led Scotland in a conflict against England that persisted not only through the reign of Edward Longshanks but also that of his son, Edward II. For nearly eight years, Scotland and England volleyed for control of the nation, culminating in the Battle of Bannockburn in 1314. By some accounts Robert's forces were outnumbered three to one, yet through clever tactics the Scottish emerged victorious.

When the Pope finally recognized Robert as the true king and sole ruler of Scotland in 1324, England's claims to the country were all but over. Although he lived to see his homeland free of English rule, on June 7th, 1329, Robert died at the age of 54. Despite the political conflicts that plagued the Bruce family during his formative years, Robert rose to the call of his people, finally shaking off the threat of England after more than a decade of turmoil.”

The feared and respected Scottish Highlanders were ferocious on the battlefield. In fact, some scholars say that even the Vikings knew to avoid the nation. Replacing the Ranger in Civilization VI, this strong recon unit gains a Combat Strength bonus fighting on hill and forest terrain.

The true origins of golf remain debated, dating back to the Chinese, Persians and Romans, but we trace the modern game of golf to 15th-century Scotland. This pastime provides a number of bonuses for Scotland in Civilization VI. A Golf Course provides additional Amenity, Gold and Culture if placed adjacent to a City Center. It also provides additional Culture when located near an Entertainment Complex. Later in the game, it yields additional Tourism and Housing bonuses. Golf Course tiles can’t be swapped or placed in the Desert and Desert Hills.

The Battle of Bannockburn was a turning point in the Scot’s fight for independence from England. Estimates vary, but the English force – at least 50% larger than what the Bruce army was able to muster – suffered huge casualties. As a result, Scottish led raids into English territories. This translates into some war bonuses for the Scottish. Robert the Bruce can declare a War of Liberation after gaining the Defensive Tactics Civic. You also gain bonus Production and additional movement during a War of Liberation.

The 18th and 19th century marked a period of great scientific and intellectual achievements for the Scottish people. Discoveries in the sciences, math, literature – to Adam Smith’s “The Wealth of Nations,” which became the foundational economic theory that had immediate impacts for England back then and the modern world, today. Happy Cities receive additional Science and Production. They also generate a Great Scientist point per campus and a Great Engineer point per Industrial Zone.

Firaxis have also revealed Korea under Queen Seondeok, the Netherlands under Queen Wilhelmina, Mongolia under Genghis Khan, India under Chandragupta, the Cree under Poundmaker, and Georgia under Queen Tamar will be part of the Rise and Fall expansion.