Civilization VI: Rise and Fall Gives Canada’s Cree Nation A Chance to Take on the World 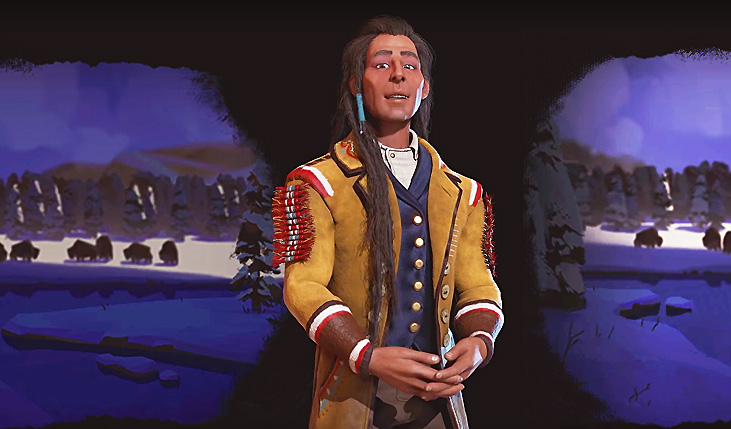 For years Canadian Civ fans have been begging for representation, and it seems it’s finally happening. Well, sort of. Civilization VI developer Firaxis have announced the Cree under Poundmaker will be part of the upcoming Rise and Fall expansion. The Cree people are almost entirely native to what’s now Canada, although Poundmaker had a complicated relationship with the Canadian government. One that ended in him being unjustly imprisoned for treason.

So, yeah, it would be a stretch to call the Cree under Poundmaker the first Canadian civ, but this Canadian is happy to see them added. The Cree’s traditional lands are right in my back yard, and my ancestors, The Metis, fought alongside Poundmaker’s people. I definitely never expected my little corner of the world to be represented in a video game. But hey, enough personal details.

Here’s the official description of the Cree under Poundmaker:

Poundmaker (Pitikwahanapiwiyin) was chief during a time of crisis for the Cree. Deeply committed to both peace with the Canadian government and the preservation of his people, he negotiated impossible choices, only to be wrongly accused and tried for treason.

In 1876, the Cree were deeply involved in a treaty negotiation with the Canadian government. Poundmaker emerged as a leading skeptic of the treaty, objecting to some of the terms being dictated. He pushed for the inclusion of a famine clause, as well as assistance for the Cree in learning farming and trades. In 1881, Poundmaker served as an interpreter and guide for the Governor-General from Battleford to Calgary. The viceregal party was impressed with their guide’s nonviolent philosophy and cultural knowledge. He publicly encouraged his band to remain peaceful during this trip.

This commitment to peace was shortly tested, though. In 1883, short supplies to the reservations led to starvation and desperation. By June 1884, war bands under young warrior leaders had begun to gather, and many groups, including ones led by the Cree leader Big Bear, assembled on Poundmaker’s reservation for a Thirst Dance ceremony to discuss the situation.

Tensions increased over the next couple years with increasing skirmishes between the Cree and government forces. Then, on the morning of 2 May 1885, Lieutenant-Colonel Otter attacked Poundmaker’s camp, believing Poundmaker to be in rebellion. After a sharp skirmish, Otter and his men were forced to retreat. Poundmaker intervened to prevent the Cree and Stony warriors from pursuing the retreating troops, thus preventing further bloodshed.

Poundmaker and his followers were eventually arrested and charged with treason against the government. Sentenced to three years in prison, he was paroled after a year at Stony Mountain Penitentiary. The year in prison had ruined him, physically and mentally, and he died shortly afterwards of a pulmonary hemorrhage Poundmaker’s historical reputation was restored after his death. His commitment to a lasting, just peace between the Cree and the government was born of foresight and dignity. His legacy is now honored among both the Cree and Canadians today.

Roughly translating to “warrior,” the okihtcitaw had a much more important role within Cree society than merely serving as combatants. The sons of chiefs, they protected the tribe when it traveled and kept order when it settled. They also policed buffalo hunts to ensure that no one hunter began before any other. They make for excellent scouts as well, serving as an early, strong reconnaissance unit. The Cree considered these seasoned warriors incredibly brave and skilled in combat, a step above their peers—often charismatic and clever, allowing them to serve as effective leaders in times of war and peace. That’s why they start with one free promotion.

Made from birch bark, the mekewap was a long-term shelter for the Cree intended to lodge many people. The Cree carefully laid out the wood into a dome shape, then wrapped wooden strips around the shelter. They then wove the strips together for warmth, further securing it from the elements. This careful construction prevented rain from permeating the shelter. When placed near Bonus or Luxury resources, the Cree get Production, Resources, Food and Gold benefits.

Poundmaker’s goals of living in peace with surrounding tribes – and governments – benefits all his allies. All Alliance types provide shared visibility. However, Poundmaker also directly benefits with bonus food and gold from establishing trade routes.

Depending upon the community, the Cree identify themselves with several different names. Among them, the Nihithaw (or “Woodland Cree”). They had an extensive network of fur trade. As the Cree people explore, they start with an extra trade route and an opportunity to gain control of nearby unclaimed tiles.

Seems like the Cree will be great for those who like to expand aggressively in the early game, which is how I like to play. Traders being able to claim territory looks particularly useful.

Firaxis have also revealed Korea under Queen Seondeok, the Netherlands under Queen Wilhelmina, Mongolia under Genghis Khan, and India under Chandragupta will be part of the Rise and Fall expansion