Civilization VI: Rise and Fall Gives India a Leader Other Than Gandhi 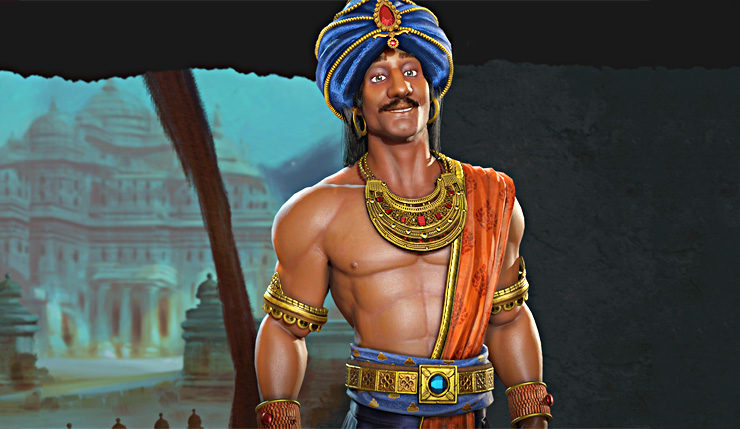 India has been a part of every Civilization game, and it’s always been led by Mahatma Gandhi. Sure, a couple Civ games have given India a second leader, but most of the time it’s just good ol’ nuke-happy Gandhi.  Well, Civilization VI: Rise and Fall is giving somebody else from India’s 4000-year-plus history a chance to rule, namely, the legendary Chandragupta Maurya.

Here’s the official description of India under Chandragupta:

Master strategist.  Respected diplomat. Honored student. Chandragupta Maurya of India was all of those things and became legend amongst his people because of it. Born sometime in the 3rd Century BCE, Chandragupta’s early life remains somewhat of a mystery. By 322 BCE he overthrew the corrupt Nanda dynasty, installed himself as ruler of the kingdom of Magadha, and established the Mauryan dynasty.

Chandragupta next turned to the lands held by the successor-states of Macedon. Although Alexander the Great had perished before Chandragupta’s ascent to the throne, his conquest of the Indus valley needed to be addressed. Chandragupta kept extending his kingdom until he pressed against the newly-formed Seleucid Empire. The Seleucid-Mauryan War, lasting from 305 to 303 BCE, would end with Seleucus ceding Macedon’s Indian satrapies to the Mauryan king.

Chandragupta’s empire extended all the way from modern day Afghanistan to southern India. Yet conquest was not Chandragupta’s only strength. Throughout his reign, Chandragupta proved himself a canny ruler who cared for his people. He built roads, irrigation systems, and expanded trade routes to improve the lives of his people. He was also clever enough to ensure the loyalty of his soldiers by providing them finery and servants in their garrisons.

This ancient Sanskrit treatise is often translated as “The science of politics,” Arthashastra covers much more ground. It’s the Indian framework for how to conduct statecraft, but also economic policy and military strategy. Credited to Chanakya – Chandragupta’s mentor – this is a template for the Mauryan dynasty.  Take advantage of these lessons as you declare a War of Territorial Expansion. You will gain Movement and Combat Strength bonuses as you march into battle.

India hasn’t traditionally been a great Civ for more aggressive players, but it looks like Chandragupta changes that. He also gives Civ VI a bit of a hunkiness infusion – apparently chest-waxing was a thing in the 3rd Century BCE!

Firaxis have also revealed Korea under Queen Seondeok, the Netherlands under Queen Wilhelmina, and Mongolia under Genghis Khan will be part of the Rise and Fall expansion