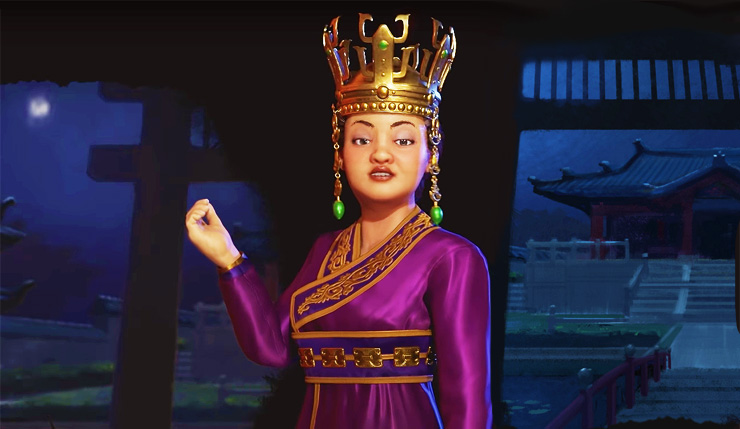 As most would-be world conquerors are already aware, Civilization VI announced its first full expansion, entitled Rise and Fall, last week. Following a year of piecemeal DLC releases, Civilization VI: Rise and Fall will introduce a hefty helping of new features and content, including nine new leaders representing eight civilizations. Unfortunately, Firaxis didn’t actually identify any of the new civs being added. Who will be crushed under our iron heel next? Civ fans demand to know!

Well, Firaxis has thrown us a bone, revealing the first new Rise and Fall civilization – Korea under Queen Seondeok. Korea has been a series staple since Civilization III, but this is the first time we’ve seen this particular leader.

Here’s the official description of Korea as led by Queen Seondeok:

With no male successors, Seondeok became the rightful heir after King Jinpyeong’s death in 632. This lead to infighting and some outright rebellions – the notion of having a Queen instead of a King didn’t sit well with some factions. One revolt leader claimed that a falling star signaled Seondeok wasn’t fit to lead. That it was a sign of the end of her reign. The Queen’s solution: Fly a burning kite high in the night sky to signal that the star is back in its place.

All the while, she still set about major projects to improve the lives of the Sillan people. Welfare policies were put in place to help the most impoverished citizens. She invested heavily in education, allowing knowledge in the arts and sciences to flourish during her rule. Seondeok commissioned the Cheomseongdae, an astronomical observatory to be built in Silla’s capital. The Queen did all this during her 15-year reign while also fending off neighboring kingdoms. It was through her ability to balance shrewd diplomacy with threats of force when needed that she even accomplished what some would think impossible: Forging an unlikely alliance with Tang Dynasty China.

Replacing the Campus district, the Seowon is home to many academic endeavors. Built into the hills, they functioned as both Confucian shrines and scenic preparatory schools in 16th Century Korea. Seonbi (intellectual aristocracy during the Joseon Dynasty) sympathized with the commoners’ plights and this philosophy found its way into the Seowons – attended largely by aristocratic children. These academies became ideal places to discuss politics and explore new ideas regarding Neo-Confucianism, Korea’s contemporary culture and government.

The hwacha is an unassuming two-wheeled cart, but this mobile ballista was deadly in the defense of Korea. A hwacha could launch a hundred rocket arrows against distant targets in seconds. Or, with a changeable module, fire off 200 Chongtong bullets.

Hwachas are considered to have turned the tide of the Imjin War. From 1592 – 1598, hwacha were widely used to aid in repelling Japanese invasions – roughly 50 units deployed in Hanseong (modern day Seoul) and another 80 along the northern borders. The most telling victory came during the Battle of Haengju where Korean soldiers beat back a force ten times its size thanks to 40 hwachas.

Korea’s unique ability is called “Three Kingdoms” and to make the most of it, be sure to build mines and farms adjacent to a Seowon. Mines receive bonus science and farms will yield bonus food from this placement.

Seondeok improved the lives of her subjects through education. Take advantage of that with Hwarang. It grants players a bonus to both science and culture in all cities with an established governor.

Seems like Korea will a solid choice for those aiming for a Science victory, with a side order of religious dominance. And hey, you can’t go wrong with the unique unit that blows enemies up with bottle rockets.