Civilization VI: Rise and Fall Welcomes Georgia To the World Stage For the First Time 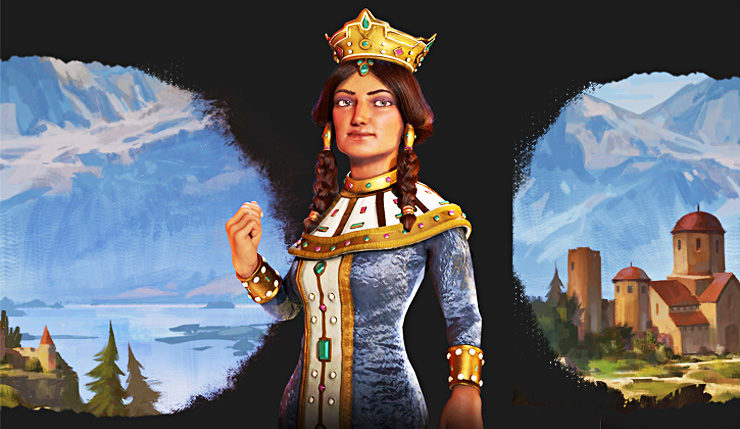 The newest announced addition is Georgia, and no, we’re not talking about the U.S. state. Georgia is, of course, also a Eurasian country bordering the Black Sea, Russia, Turkey, and Armenia. This is the first time Georgia has been in a Civilization game. The civ will be led by Queen Tamar, who ruled over the nation at the height of its power during the late 12th century.

Here’s the official description of Georgia under Tamar:

When her father George III died in 1184, Tamar assumed the throne of a fractured Georgia. Tamar was pressured into accepting the nobles’ choice for her husband: The Rus prince Yuri. The two were wed in 1185, but the marriage didn’t last. Yuri led Georgian forces to victory in battle, but he was a coarse and unpleasant person, causing all sorts of problems for the royal court. So, Tamar filed to divorce him on grounds of drunkenness and immorality. This was monumental considering the era.

As Tamar left Yuri, Georgia saw the greatest expansion of its domain begin. The Georgians fought against the neighboring Muslim sultanates, aided by exceptional generals (including the new king consort, King David IV) and conquered them. Nearby kingdoms became vassals and protectorates. Georgians even founded the Empire of Trebizond, injecting themselves into the powers of the Middle East.

Tamar was also a strong patron of the arts. She bolstered trade and commerce, and minted coins bearing her monogram and titles. Laws were codified. Churches and cathedrals were built. Georgian culture developed as a strong and lively blend of Byzantine Christianity and Persian-inspired ideas. She came to power in a divided kingdom, and left it larger, more powerful, and sure of its cultural identity. She is canonized as a saint in the Eastern Orthodox faith, and a national symbol for Georgians even today.

These fierce Georgians dressed in chainmail and carried swords, axes, and small, black bucklers adorned with crosses for nighttime raids -- due to the shield’s color, the warriors were practically invisible in the moonlight. It should come as no surprise that this warrior order gets a Combat Strength bonus, but they also suffer no movement penalties on hilly terrain. Though tradition was their watchword, they did adapt with the times, incorporating firearms as their importance on the battlefield became unmistakable.

These Georgian fortresses were particularly difficult to assault due to their position on the high ground. Unique to the Georgians, it raises the strength of your outer defenses to the highest level while at a lower production cost than Renaissance Walls. Once you advance to the Conservation Civic with Georgia, you will be able to benefit from that tourism as well.

Unique Leader Ability: Glory Of The World, Kingdom And Faith

Tamar can declare a Protectorate War after gaining the Theology Civic. Considering Tamar’s upbringing – and how she was known to inspire her troops before battle, they gain bonus Faith for a limited time after declaring a Protectorate War. In addition, Georgia gains bonuses as they continue to deliver the word of God. An Envoy sent to a city-state of your majority religion counts as two.

Out of a time of relative instability for Georgia, Tamar helped give purpose and unite her people. Honor her achievements through Pride Moments. When making a Dedication at the beginning of a Golden Age, receive its Normal Age bonus towards improving Era Score, in addition to its Golden Age bonus.

Georgia under Tamar looks to be one of the most balanced of the new Rise and Fall civs. Strong unique units and city defenses, as well as faith and Golden Age bonuses means you could easily pursue Domination, Religious, or Cultural victories. So, go on, give the new guys a try!

Firaxis have also revealed Korea under Queen Seondeok, the Netherlands under Queen Wilhelmina, Mongolia under Genghis Khan, India under Chandragupta, and the Cree under Poundmaker will be part of the Rise and Fall expansion.