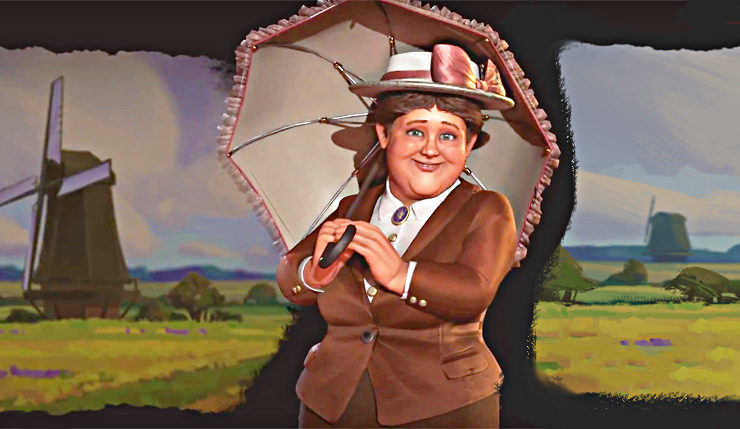 Last week Civilization developer Firaxis revealed our first Rise and Fall civilization, Korea under Queen Seondeok, and now they’ve unveiled the second – the Netherlands under Queen Wilhelmina. The Dutch have been a series staple since Civilization III, but up until now they’ve always been represented by the nation’s most famous leader, William of Orange.

Here’s the official description of the Netherlands as led by Queen Wilhelmina:

Queen Wilhelmina saw the dawn of the 20th century, the economic collapse of the 1930s and led the Netherlands through both World Wars.

Her nearly 58-year reign is often remembered for her role maintaining Dutch neutrality during World War I and inspiring the Dutch resistance during World War II. The Dutch, well known for their trading, were blockaded by Allied forces by the close of WWI, despite their claims of neutrality. Amidst all this, and around the wreckage of the world economy, Wilhelmina’s prudent investments would see her become one of the wealthiest people in the world.

The Dutch-built De Zeven Provinciën (“The Seven Provinces”)-class ships were not only devastating to enemy ships, but could lay siege to harbor cities. These powerful ships of the line were nearly half the length of a football field (either variety), armed with a minimum of 80 guns spread across two-gun decks. They served as the naval backbone of multiple battles in the Anglo-Dutch wars—battles nobody expected a mercantile power to win. Nevertheless, these ships proved the Dutch could hold their own against other (presumably) mightier naval powers.

The Dutch are respected not just for their trade empire, but for their ingenuity as well. Polders are low-lying land tracts encircled by dikes. The only way water enters the area is through manually operated devices. They result in land reclamation efforts, creating flood plains separated from the sea and drainable marshes. While there are obvious benefits like extra land to grow food and increased production, Polders also served a military purpose. As Wilhelmina alluded to Kaiser Wilhelm II, opening the sluice gates at high tide and sealing them at low tide created an inaccessible swamp the German army couldn’t cross during WWI.

Literally translated – “Great Rivers” refers to waterways that have been a natural dividing line across the Netherlands. These rivers formed the boundaries between states and even served as a way to mark the edges of empires. The navigable rivers and canals built around them were the foundation upon which the Dutch built their culture – and massive mercantile fleets. That’s why the Netherlands gain major adjacency bonuses for Campuses, Theater Squares and Industrial Zones if near a river.

Wilhelmina broadcast a voice of resistance for the Dutch during WW II – “Radio Oranje” – inspiring her people from afar. Since the Dutch are world-renown for their trade routes and merchant ships, put them to good use with Wilhelmina’s ability. After establishing trades routes to and from foreign cities, you’ll gain Culture bonuses.

Unsurprisingly, it sounds like the Dutch will a good choice for those gunning for naval or trade supremacy. They ought to be a top choice when playing on water-heavy maps.