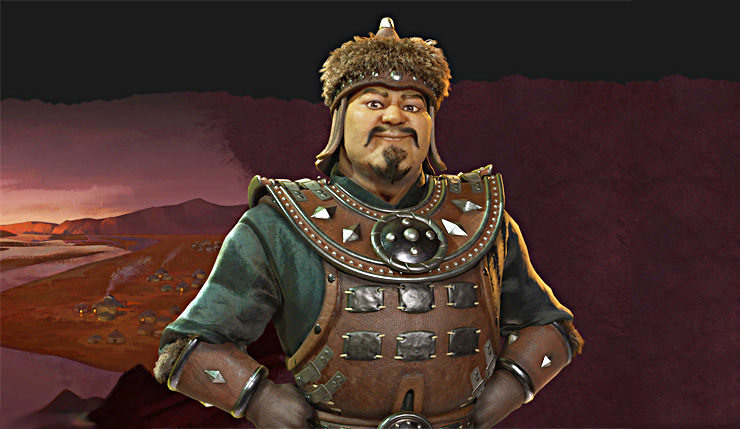 Previously, Civilization VI developer Firaxis revealed Korea under Queen Seondeok, and the Netherlands under Queen Wilhelmina will be part of the Rise and Fall expansion, and now they’ve unveiled a classic – Mongolia as led by the infamous Genghis Khan. The Mongols under Genghis Khan have been part of every Civilization game to date, because of course they have.

Born Borjigin Temujin (the later translates as “blacksmith”), scholars say he was named after a captured tribal chieftain as a taunt. Temujin began amassing troops in his 20s. It started with his brothers as a fighting unit going on raids of their own. He would gradually build his army until it became a feared 20,000-strong force. Next, he'd go on to defeat the Tartars and exhibit the brutality he would become known for. It didn’t stop there. He ordered the death of every Tartar male above three feet tall.

By 1206, Temujin united the tribes of the steppes. This is when he received the title 'Genghis Khan'. He then proceeded to issue the Yassa, a collection of divine laws governing everything from property to marriage to civil service designating its execution to his second son, Chagatai. Upon his death, Khan’s black spirit flag continued waving as his third son, Ogedei, would inherit and expand an empire stretching from the Caspian Sea in the west all the way to the East Sea.

The Mongolian Keshig (loosely translated as “The Favored” or “The Blessed”) were the elite imperial guard of the Great Khan. Split up into daytime (Torguud) and nighttime (Khevtuul) based troops, these mounted warriors were originally comprised of Genghis Khan’s most loyal fighters. The Keshig were well-equipped, using their composite bows and mobility to harry opponents from a distance. As horse archers, they were second to none. The Keshig served as bodyguards and they are the perfect escort for slower-moving civilian and support units – and can get them to travel at a faster movement rate.

“Ordu” means “palace tent.” However, an ordu was something much more than just a simple tent—it was the center of the tribe for the nomadic Mongolians. An ordu served as the mobile headquarters and main encampment for the Khan and his warriors. Though built for travel, it had style, from simple decorations to carefully sewn patterns. The ordu moved with the Khan and his warriors as they went on campaign, ensuring they always felt at home no matter where they traveled. That’s why ordus grant a movement bonus to light and heavy cavalry.

Because the Mongol hordes were so quick, the messengers had to be even quicker. The Örtoo served as a supply route system widely used by Genghis Khan and the Khans to follow him. These relay stations provided support for messengers to help speed up the delivery of intelligence information. Think of it as a combat-focused trading route, so take advantage of the Örtoo ability to get a boost in Combat Strength and Diplomatic Visibility over your opponents.

Unsurprisingly, Mongolia is a cavalry-driven war machine. You don’t choose the Mongols if you’re into diplomacy or carefully-played cultural victories.