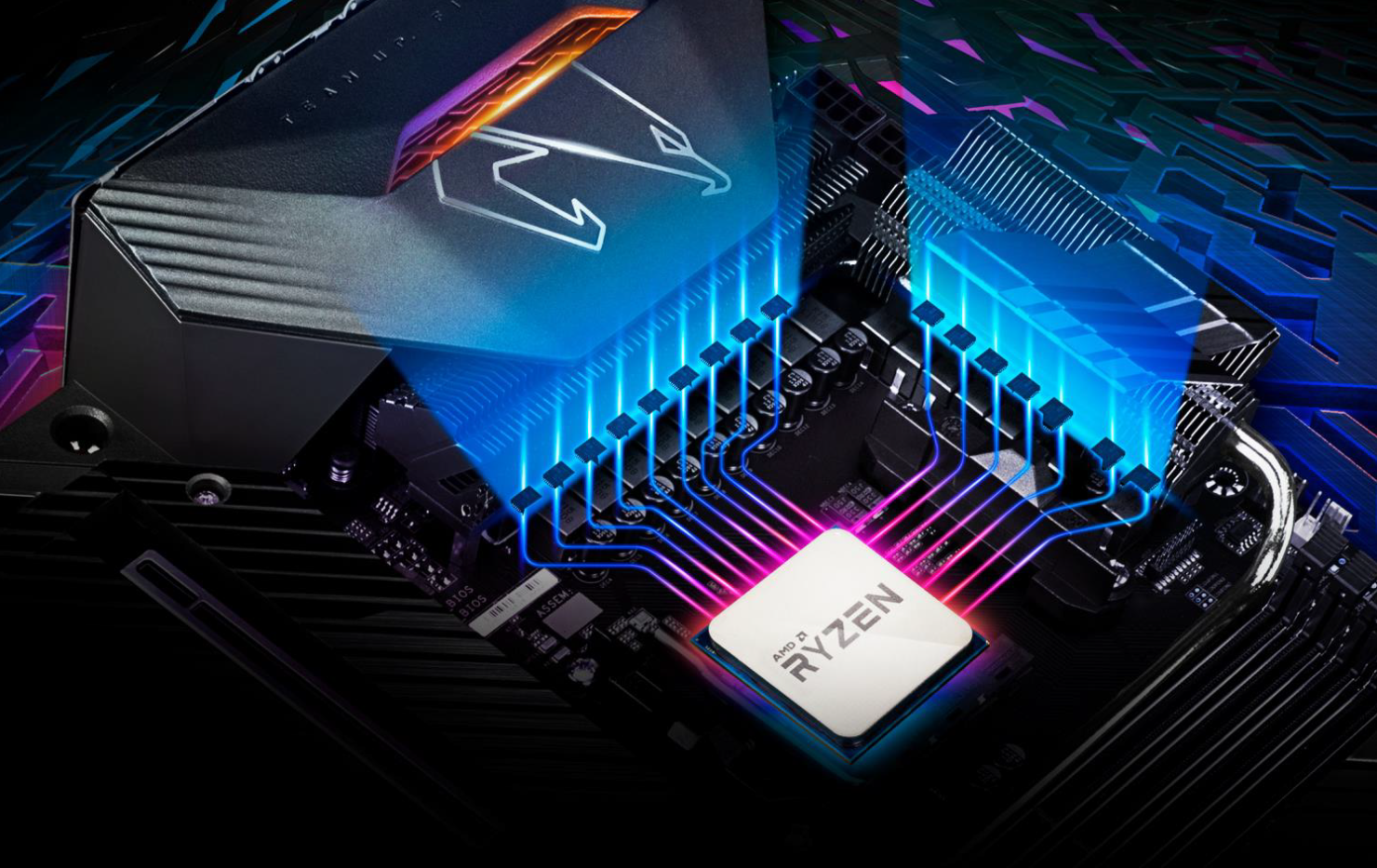 The overclocking guide posted by Gigabyte provides us an early look at what to expect from AMD's flagship mainstream processor. The Gigabyte X570 AORUS Master motherboard and AMD Ryzen 9 3950X was used along with 16 GB of DDR4-3200 memory. While we have previously seen overclock numbers in Cinebench, they were mostly done with liquid nitrogen cooling. All testing done here was with an EK-KIT P360 liquid cooler which is a more real-life test case. 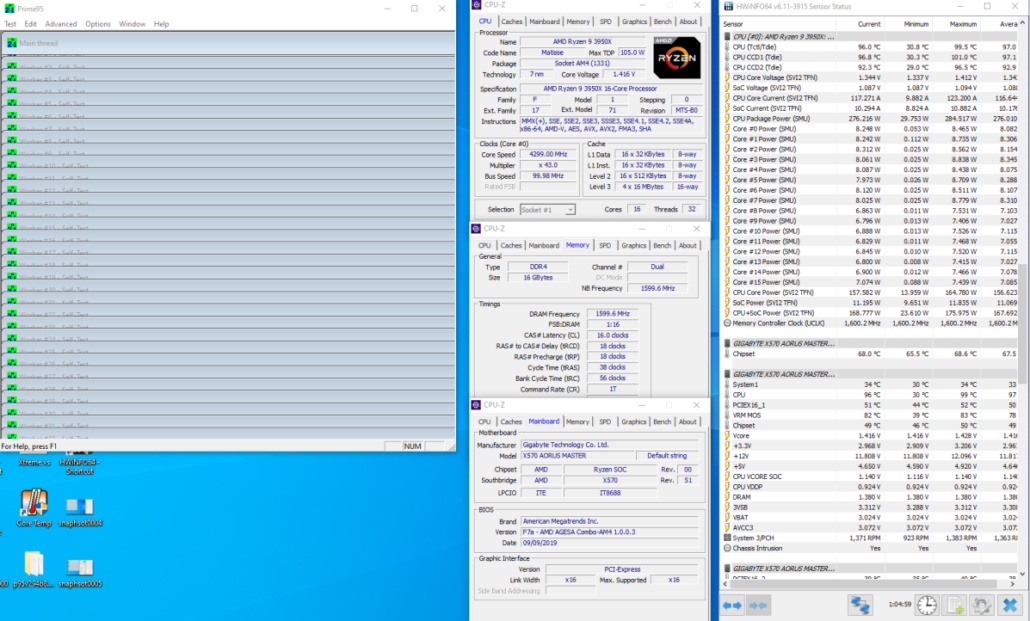 According to Gigabyte, the AMD Ryzen 9 3950X was stable at 4.3 GHz with a voltage supply of 1.416 Volts. AMD advises an overclocking voltage of 1.3-1.45V for their AMD Ryzen 3000 series CPUs. The temperatures at maximum load under Prime 95 reached 101C (hottest junction temperature). The X570 chipset temperature also hit 68C which shows why the extra fan cooling is needed. When it comes to performance, at stock, the Ryzen 9 3950X posted a score of 3932 points in Cinebench. Do note that the older R15 version was used for evaluating the performance. 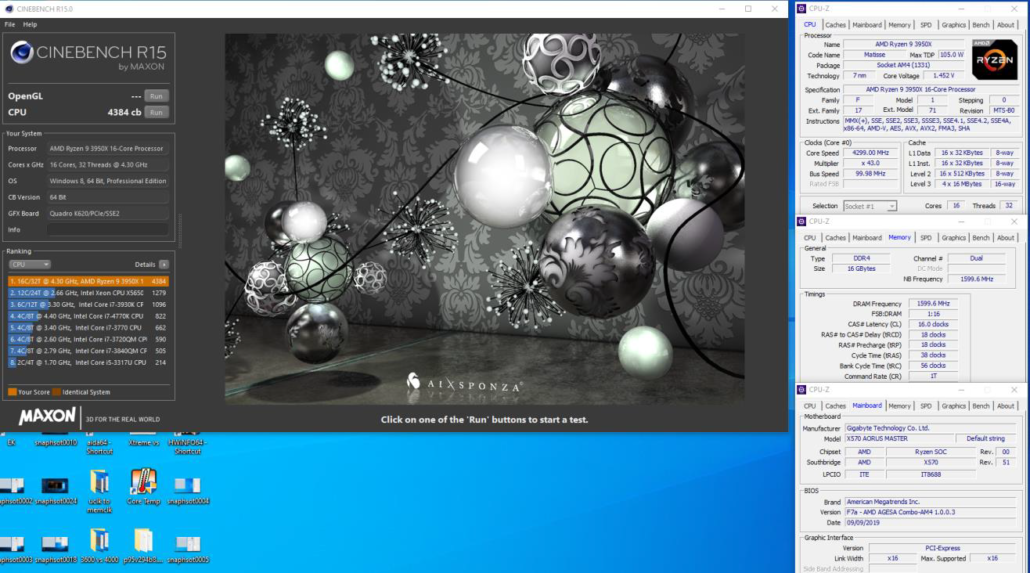 At 4.3 GHz, the same processor posted a score of 4384 points which is a 452 point difference. This is definitely a major boost in performance which even exceeds the performance of AMD's own TR 2970WX processor which with its 24 cores can manage around 4300 points (at stock). The Ryzen 9 3950X chip also outperforms the Core i9-9980XE which is 2 more cores and 4 more threads & only scores around 3700 points in the same benchmark. This shows that with their mainstream Ryzen processors, AMD is ideally positioned against their competitors yet to be released HEDT 10th Gen chips which come out this month.

Although 4.3 GHz might be the limit for many parts, there are parts that can be overclocked even higher. Not on all occasions are these results going to assure you the prime95 stability but at least the parts might be able to be stable through Cinebench R15. We recommend using reliable dual-radiator water cooling or even better, a triple-radiator solution for the best results.

Follow the previous steps and just adjust the settings to the new values. With that said, we don’t suggest you do it since the CPU voltages that you need to achieve such results are quite high and may damage your parts. For experimental purposes only, we tried how high our part could pass Cinebench R15. Unfortunately, this time we weren’t able to test multiple parts so we can only base our experience on a single part. And Cinebench R15 at 4400 MHz. 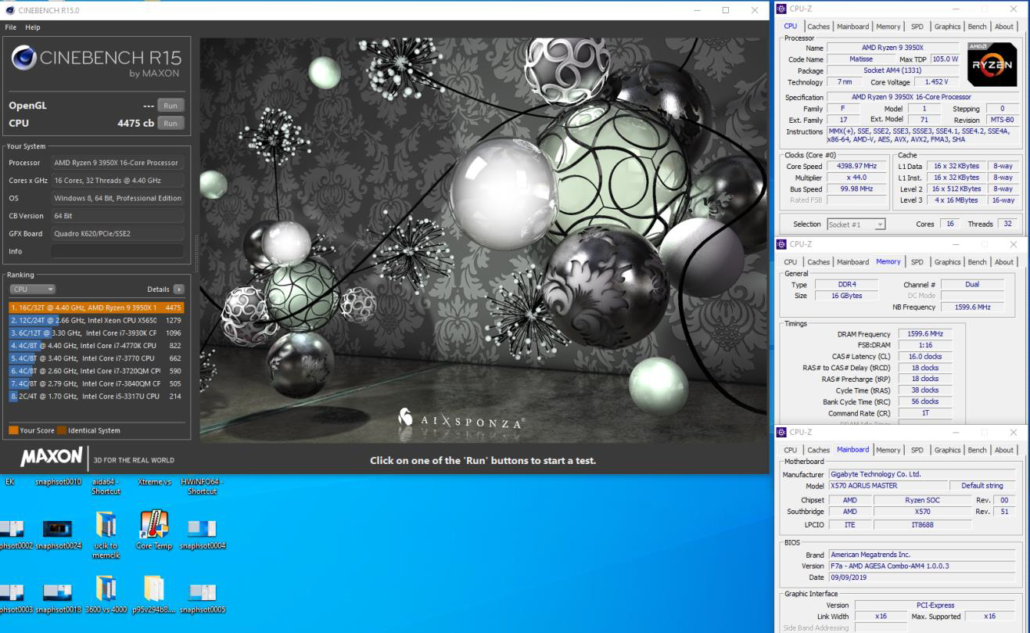 Gigabyte also managed to make the CPU run at 4.4 GHz, successfully running Cinebench R15 with no issues at all. With an additional 100 MHz bump across all cores, the chip managed a score of 4475 points which is simply amazing considering it's being done without the use of LN2. Voltage supply of 1.452V was used which is just past the safe boundary but Gigabyte also mentions that not all chips would be able to hit 4.4 GHz putting the 4.3 GHz overclock as the sweet-spot for the Ryzen 9 3950X 16 core processor.

In terms of specifications, the AMD Ryzen 9 3950X will feature the 7nm Zen 2 core architecture. There will be three chiplets on the Ryzen 9 interposer which include two Zen 2 dies and a single I/O die which is based on a 14nm process node. The AMD Ryzen 9 3950X will be fully enabled, offering 16 cores and 32 threads. This core configuration has never been available on mainstream platforms such as AM4. Even the 12 core, 24 thread Ryzen 9 3900X configuration hasn’t been seen on mainstream platforms and AMD is the first to bring such high core counts that used to be HEDT exclusive, down to mainstream users.

In terms of clock speeds, the AMD Ryzen 9 3950X runs at a base frequency of 3.5 GHz and boosts to a blisteringly fast 4.7 GHz which is the highest for AMD’s Ryzen 3000 series processor. The chip will feature 72 MB of total cache and just like the other Ryzen 9 parts, feature a TDP of 105W. The TDP is based on the base frequency numbers so it will actually be higher when the chip boosts, or is manually overclocked by users. When it comes to overclocking, we also know that like all other Ryzen CPUs, the Ryzen 9 3950X will feature a soldered design that should help deliver better thermals than TIM.

The AMD Ryzen 9 3950X launches in November along with the 3rd Gen Ryzen Threadripper lineup which will initially offer up to 24 cores and 48 threads. AMD is fine-tuning the chip so it will be able to hit the advertised clock speeds on launch and just in the prime time of their new microcode that is expected to feature over 100 improvements for Ryzen processors.