AMD Ryzen 9 3950X Overclocked To A Massive 5.4 GHz Across All 16 Cores, Breaks Its Own World Record in Cinebench

In terms of clock speeds, the AMD Ryzen 9 3950X runs at a base frequency of 3.5 GHz and boosts to a blisteringly fast 4.7 GHz which is the highest for AMD's Ryzen 3000 series processor. The chip will feature 72 MB of total cache and just like the other Ryzen 9 parts, features a TDP of 105W. The TDP is based on the base frequency numbers so it would actually be higher when the chip boosts or is manually overclocked by users. When it comes to overclocking, we also know that like all other Ryzen CPUs, the Ryzen 9 3950X will feature a soldered design which should help deliver better thermals than TIM. 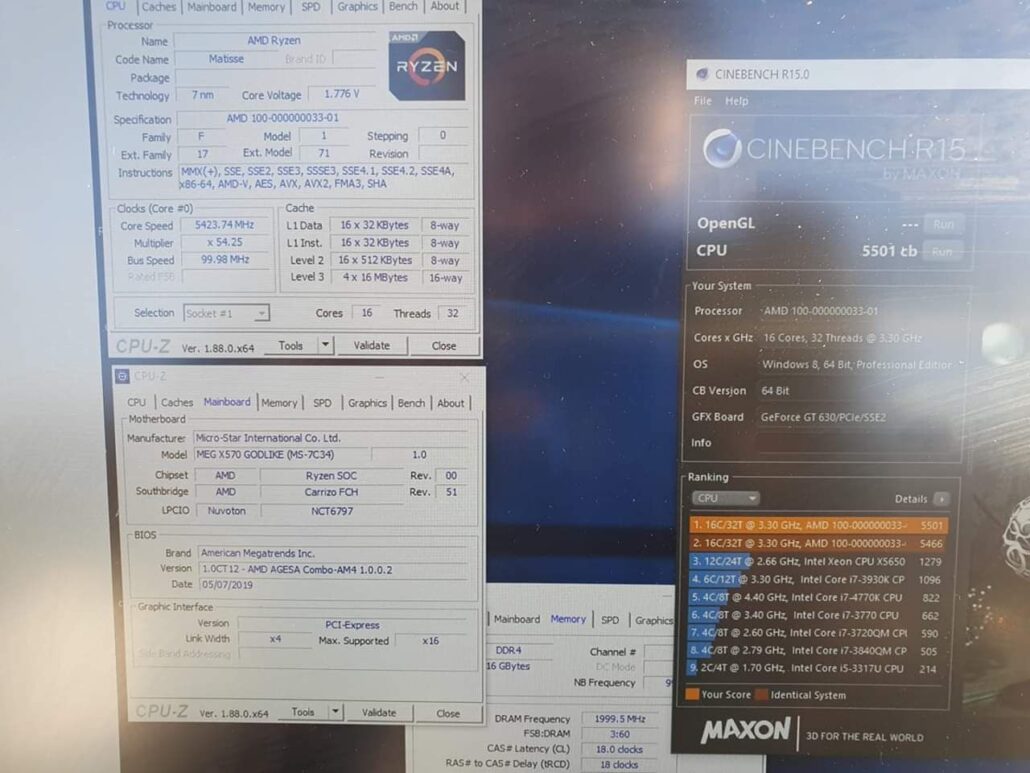 We have already seen the chip breaking various world records when it was announced at E3 2019 and more in recent leaks where it was spotted multiple times, obliterating Intel's flagship Core i9-9980XE processor in Geekbench 4 (Source 1 / Source 2). The most recent performance benchmark show the AMD Ryzen 9 3950X clocks in at its highest frequency achieved to date, at 5.4 GHz, which is seriously impressive. The overclock was achieved once again on an MSI MEG X570 Godlike board and the chip was being supplied with 1.776V which is very close to the chip's breaking limit.

The CPU was put under LN2 for cooling and the maximum score that the processor achieved was 5501 points which are 67 points higher than the previous world record of 5434 points whereas the Core i9-9980XE's highest score ever achieved was 5320 points. The score hasn't been validated just like the previous records but we should expect them to be put up on HWBot soon enough.

Previously, the AMD Ryzen 9 3950X was overclocked to 5.275 GHz with a voltage of 1.608V across all 16 cores. The chip was running under LN2 and managed to break some world records. The processor was running on a MEG X570 GODLIKE motherboard from MSI which will be one of the best X570 boards to get when the platform launches in July. The processor was also running alongside a pair of G.Skill Trident Z Royal DIMMs (DDR4) at 4533 MHz.

The three records that were broken during the overclocking session include:

They certainly won’t display the same features that will be available on the newly launched X570 lineup but will feature fully stable functionality for users who just want to drop in a new CPU and continue using their PCs without the hassle of upgrading the motherboard and everything from scratch. AMD's X570 platform and Ryzen 3000 CPUs are planned for launch on 7th July while the AMD Ryzen 9 3950X will be available in September 2019.