AMD has officially confirmed that they will be introducing their Ryzen Threadripper 3000 CPUs in November 2019. The news comes alongside the announcement that the Ryzen 9 3950X flagship processor has been pushed back to November so that AMD can launch both high-end processor series in volume. 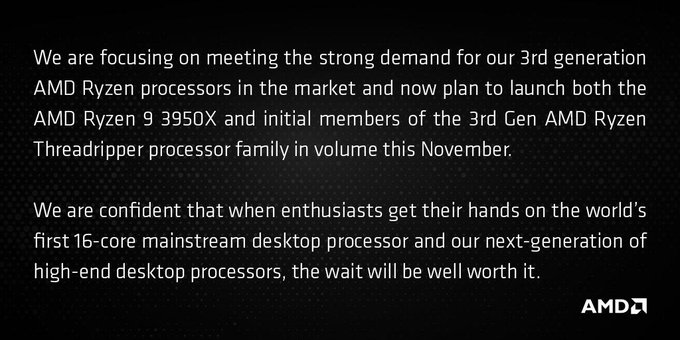 The initial lineup which is most probably going to include chips optimized for gamers & enthusiasts would offer better performance with the new 7nm Zen 2 core architecture, delivering a stellar increase in multitasking performance and a huge boost to single-core tasks with the 15% IPC increase. The same underlying DNA which was used to built EPYC 'Rome' processors will be used and featured on 3rd Gen Threadripper processors so expect some amazing performance numbers.

There have been rumors about AMD splitting their platforms into enthusiasts and workstation-focused so AMD would probably launch the enthusiast variants first followed by a workstation focused platform and CPU launch close to 2020. This may also tell why the recent leaks have only shown a 32 core and 64 thread part with the 64 core and 128 thread chip aiming the workstation 'WRX' platform. AMD has also announced that the initial SKUs would include a 24 core and 48 thread chip as the top variant with more chips to follow later on.

The AMD Ryzen Threadripper 3000 series family is internally known as “Castle Peak” and is stated to bring dominant leadership in the HEDT market. The family will prove to be a new watermark in performance and overall efficiency while new platform features will be introduced on the new and enhanced TR4 socketed motherboards to take them to the next level.

AMD is also expected to introduce its new TRX4 and WRX8 platforms for the new Threadripper line which would offer both quad-channel and octa-channel memory interfaces. You can read more on that here.