AMD CEO: Next-Generation Zen and rDNA Core Focus is Architecture, Not Process Technology – Will Transition to 5nm at the Appropriate Time 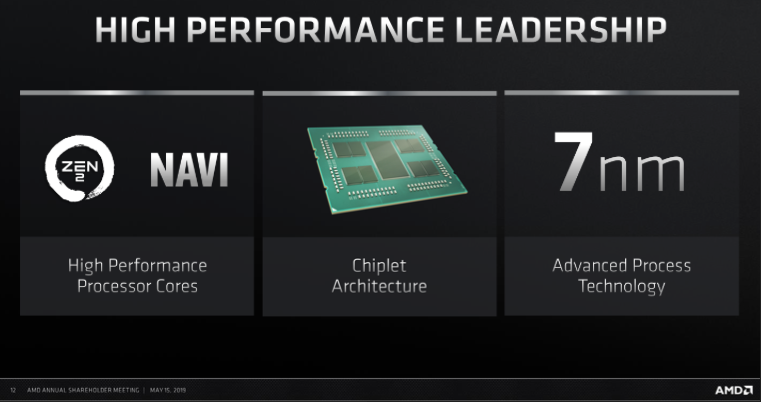 During its recent earnings call, AMD's CEO, Lisa  Su, stated that upcoming Zen and rDNA cores would focus more on architecture than process technology. This statement comes soon after AMD's first full quarter of 7nm product availability which includes their EPYC, Ryzen, and Radeon lines that led to their highest quarterly revenue since 2005.

Replying to a question raised by a reporter about process technology and architecture being a core part of the current 7nm lineup, AMD's CEO stated the following:

The AMD Zen and rDNA cores are based on TSMC's bleeding-edge 7nm process node and are the first high-performance parts to feature the new process technology. Given those high-end products rely on new process nodes for several years, AMD's main focus in the coming years would be to maximize the performance benefit from the existing 7nm technology, offering major performance uplifts primarily on the architecture side. This means that the upcoming Zen and rDNA family would utilize the 7nm node for years to come but this doesn't remove 5nm from the roadmap.

According to AMD's CEO, they would definitely transition to 5nm but only at an appropriate time. We know for a fact that AMD is working on their next-generation Zen and rDNA cores. AMD has confirmed future CPU cores up till Zen 5 and the next-generation rDNA architecture has also been confirmed for 2020. The thing about these cores is that while AMD won't be transitioning to sub-7nm nodes yet, they will utilize the optimized 7nm+ technology to give them a boost in terms of efficiency. Also, AMD doesn't feel the need to hurry in process technology as they are already way ahead of their competitor (Intel) who is still relying on 14nm in 2019 for their high-performance product lineups and expected to move to 10nm in 2020.

Just like Zen+ used an intermediate 12nm FinFET node to deliver on some decent efficiency upgrade on Ryzen and Radeon products, the next-gen Zen 3 and rDNA 2 cores would be based upon the 7nm+ process node which would leverage their overall efficiency. However, AMD at the same time states that the optimized node won't play a major role in terms of performance uplift as they would rely on the architecture to do that job.

AMD's recently updated roadmap showed that Zen 3, the architecture powering 'Milan' CPUs, will be arriving in 2020. The Zen 3 core would be based on the 7nm+ process node which would be put up against the 10nm Ice Lake-SP and 14nm++ Cooper Lake Xeon processors. In terms of efficiency, AMD has highlighted that their processors would offer much better performance per watt & just by looking at the slide, we can also note that even EPYC 'Rome' processors are designed to compete favorably against Intel's 2020 Xeon products. This is something that AMD had hinted back since 2018 when Rome was still being designed.

AMD's CTO, Mark Papermaster also revealed that Zen 3 is built on the foundations of Zen 2 and will primarily leverage efficiency along with an uplift to overall performance.

AMD already has some of the most advanced packaging solutions in the industry, with their Zen chiplet design on Ryzen and EPYC CPUs. They are only expected to further refine it in the coming generations to major architectural changes. During a presentation at the HPC-AI Advisory Council in the UK, AMD unveiled some major changes coming with their Zen 3 based EPYC Milan CPUs that include cache redesigns and the possibility of having 8 cores inside a CCX. It will be interesting to see how this pans out, you can read more here.

The 7nm+ Zen 3 core design has been completed and we can see production commence sometime in 1H of 2020. While Zen 2 was the first processor architecture to be based on the 7nm node, Zen 3 would be based on an evolutionary 7nm+ node which allows for 20% more transistors than Zen 2's 7nm process. The 7nm+ process node also delivers 10% better efficiency. It is possible that we may not get as significant of a core bump as we got with Zen 2 processors but nevertheless, the added performance uplift would put more pressure on Intel in the server and desktop space.

One of the flagship products of the Zen 3 core architecture would be the 3rd Gen EPYC line known as Milan. The EPYC Milan series of processors would be deployed in the new Perlmutter super-computer, designed by CRAY. Early specifications for a singular node reveal that the Milan CPU has 64 cores and 128 threads and AVX2 SIMD (256-bit). There's also support for 8-channel DDR ram & support for greater than 256 GB per node.

Aside from Zen 3, Zen 4 and Zen 5 have also been confirmed. The 3rd Generation EPYC lineup which was officially confirmed as 'Genoa' during the 2nd Generation EPYC 'Rome' launch event. Zen 4 is currently in-design and will have a launch scheduled around 2021-2022. It will be using the sub-7nm process node and definitely be a proper upgrade over the Zen 2 / Zen 3 design. As with every Zen generation, the Ryzen and Ryzen Threadripper lineups would also be available, battling out and dominating the desktop/HEDT landscape with sheer amounts of performance & disruptive value proposition.

What do you want to see in AMD's next-gen Zen 3 core architecture based CPUs?

Moving on to the GPU side, AMD has also revealed that the RNDA 2 GPU architecture is currently in-design and scheduled for launch in 2020. Given that the Zen 3 design has completed and RDNA 2 is still in design, we can say that the CPU launch would be much ahead of the 7nm+ GPUs. We can see a possible CPU launch in mid of 2020 with GPUs arriving in late 2020.

AMD also wants to push RDNA 2 towards the higher-end spectrum of the market. While the first generation RDNA GPUs perform great in the $300-$500 segments, we would likely see a range of enthusiast-grade designs with RDNA 2 based Radeon RX series graphics cards. These would take the fight to NVIDIA's RTX 2080 SUPER / RTX 2080 Ti but NVIDIA isn't the company that would just silently sit through a competitor's launch. Plans of NVIDIA's 7nm GPUs are underway and it is likely we would see a grand launch in 2020 for their next-generation graphics architecture, presumably known as 'Ampere'.