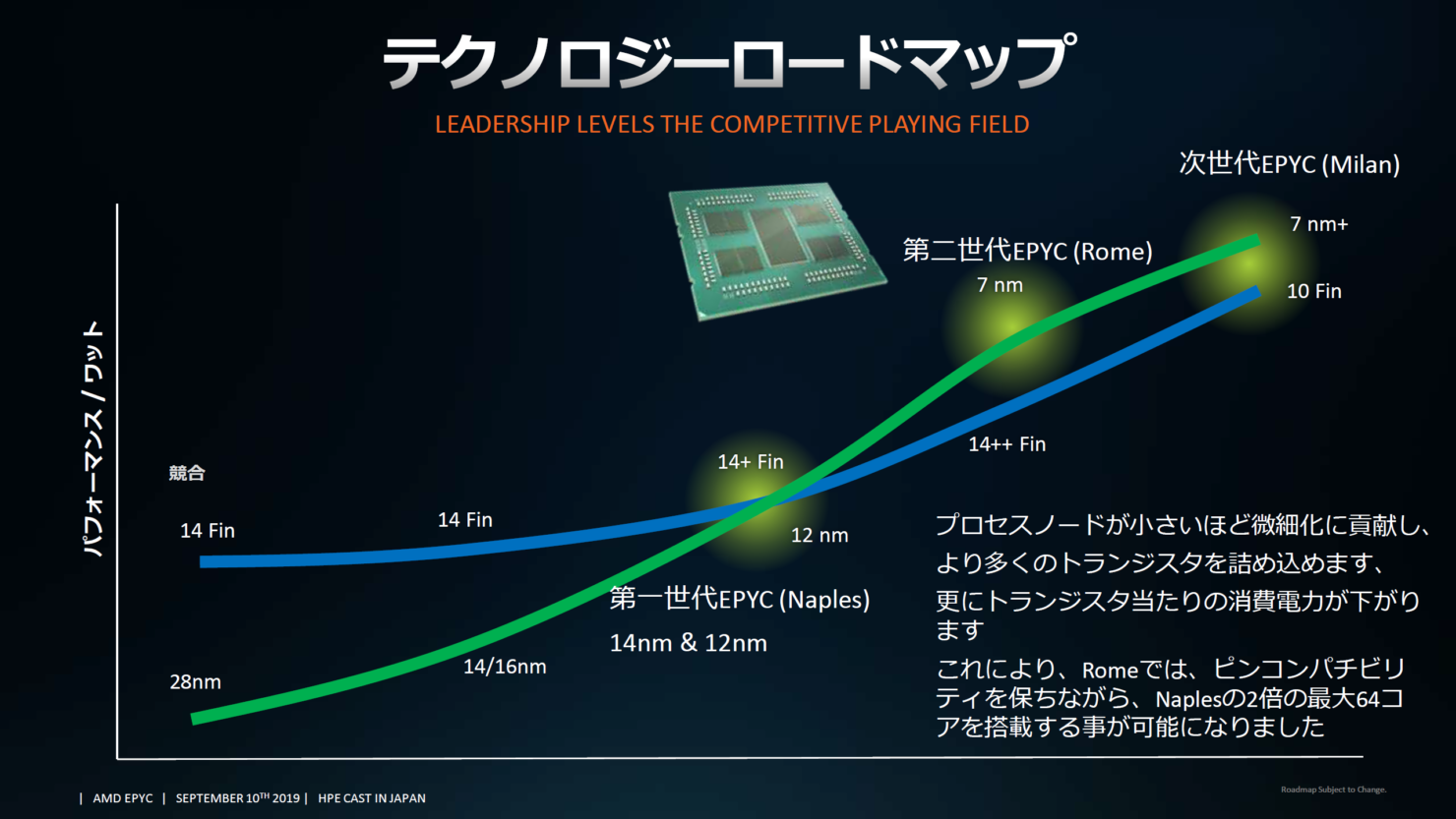 During a presentation at HPE Cast 2019, AMD revealed that their 3rd Generation Zen 3 based EPYC CPUs codenamed 'Milan', would offer better performance per watt than Intel's 10nm Xeon chips. It has just been a month since AMD unveiled their 2nd Generation Zen 2 based EPYC 'Rome' chips & now we are already getting some details for Milan.

With the launch of 2nd Generation EPYC 'Rome' processors based on the Zen 2 core architecture, AMD introduced a ton of key features, most prominently, their new chiplet architecture which has allowed the company to scale their chips to twice the number of cores and threads. The chips also feature industry-leading I/O and are the first server products to be based on a 7nm process node.

AMD's recently updated roadmap showed that Zen 3, the architecture powering 'Milan' CPUs, will be arriving in 2020. The Zen 3 core would be based on the 7nm+ process node which would be put up against the 10nm Ice Lake-SP and 14nm++ Cooper Lake Xeon processors. In terms of efficiency, AMD has highlighted that their processors would offer much better performance per watt & just by looking at the slide, we can also note that even EPYC 'Rome' processors are designed to compete favorably against Intel's 2020 Xeon products. This is something that AMD had hinted back since 2018 when Rome was still being designed.

AMD's CTO, Mark Papermaster also revealed that Zen 3 is built on the foundations of Zen 2 and will primarily leverage efficiency along with an uplift to overall performance.

The AMD Zen 3 core will be built on the evolutionary 7nm+ node which allows for 20% more transistors than Zen 2’s 7nm process. The 7nm+ process node also delivers 10% better efficiency. It is possible that we may not get as significant of a core bump as we got with Zen 2 processors but nevertheless, the added performance uplift would put more pressure on Intel in the server and desktop space.

One of the flagship products of the Zen 3 core architecture would be the 3rd Gen EPYC line known as Milan. The EPYC Milan series of processors would be deployed in the Perlmutter Pre-Exascale super-computer, designed by CRAY. Early specifications for a singular node reveal that the Milan CPU has 64 cores and 128 threads and AVX2 SIMD (256-bit). There’s also support for 8-channel DDR ram & support for greater than 256 GB per node.

Intel Ice Lake-SP which is based on the 10nm+ node is using a new core architecture known as Sunny Cove which delivers increased IPC of up to 18%. That would result in decent performance gains but it remains to be seen whether Intel's 10nm+ for servers can clocks as high as the 14nm (+++) parts which would also be available the same year in 2020. AMD's EPYC lineup looks more streamlined right now, offering a one-package solution for workstations and servers while Intel's Xeon landscape is based around several different platforms including Xeon-W, Xeon-SP, and Xeon-AP. It will be interesting to see how Intel takes on a competitor who not only has the core/thread lead but also performance efficiency lead in the server market and not to mention the disruptive price points of their entire EPYC lineup, something which Intel has been keeping a close eye on.