Why You Shouldn’t Update to iOS 13 Today and Wait for iOS 13.1 Instead 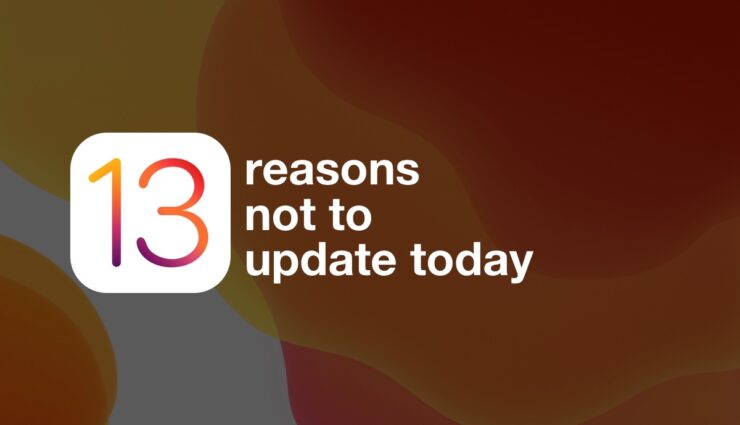 In case you needed a few reasons for not updating to iOS 13 today and wait for iOS 13.1 instead, then read on.

iOS 13 is jam-packed with features and the initial release is going to appease a lot of users who were waiting day and night for something new to arrive. However, since this is the initial release, therefore expect some problems along the way. It's a good idea to wait for iOS 13.1 instead, and we'll give you a few reasons why.

Apple released iOS 13 today, not iPadOS. iPadOS is going to be a part of iOS 13.1 which is set for release on the 30th of this month. So, if you don't want your iPad running iOS 12 for 10 straight days while your iPhone runs iOS 13, then it's probably a good idea to wait things out.

Version 1.0 of any software is going to be buggy and this one's not going to be an exception.

In order to get the iOS 13 release out the door as quickly as possible, Apple removed a few features and moved them to iOS 13.1 instead. So, in case you were wondering where some of those automation features went in the Shortcuts app, you now have your answer.

Users are reporting bad battery life on the iOS 13 GM release. This is something you should expect in new software. Give it some time, at least a couple of days so the issue sorts itself out. Or, just skip to iOS 13.1 which will be packed with tons of fixes and features.

Broken Functionality on Some Apps

Developers are working day and night to get their apps out the door, all ready for iOS 13. Not all apps are going to be ready. So, give it some time and wait until iOS 13.1 arrives. Until that time, your favorite apps will be ready and you will have a slightly more stable version of iOS 13 on your hands too.