Yesterday, Apple's latest version to its iOS lineup was released that brought Apple Music alongside many bug fixes. The biggest challenge for hackers was to jailbreak it. Luckily it was achieved within the next two hour of iOS 8.4 launch by PP Jailbreak team and TaiG team too comes along. Henceforth, iOS 8.4 is jailbreak-able and its open to hundreds of tweaks with full support. 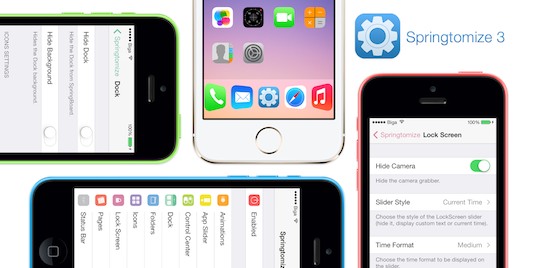 In that context, Springtomize, one of the most popular jailbreak tweak has been updated which has full support for iOS 8.4. The tweak can be downloaded via the Cydia store right now. Previously, Filippo Bigarella, the developer of Springtomize stated that he wont be able to update the previous version of the tweak due to his internship with Apple but another developer would work on the update.

The well regarded tweak, Sprintomize 3 is fully functional on iOS 8.4 firmware which is cross checked by many users. The new updated version of Springtomize offers a great diversity in terms of features and an overall feel. Some of the features of Springtomize 3 are listed as follows:

The amount of freedom to change customization is immense which causes the tweak to be highly in demand. Where users download each tweak for a separate purpose, Springtomize 3 enables them to do all of them within itself. Hence its second to none when it comes to power and customization together. Springtomize 3 has full support for TaiG released iOS 8.4 jailbreak. Check out the video for more information.

Users who already have Springtomize 3 installed will get the update iOS 8.4 which will hold absolutely no cost. However, if you are downloading this tweak for the first time, you will be charged with a mere $2.99. As to recommend, this tweak is money well spent. Let us know in the comments how you liked the update.