If you are willing to give some tweaks a try on iOS 8.4, there are chances that you will need an activator to support them. While the current public version of the Activator does not come in to play with iOS 8.4, the latest beta launched for Activator v1.9.4 will take care of any hurdles. Ryan Patrich's Activator package is one of the most widely used tool by developers for many tweaks. The package is available in the his repo in Cydia and has been updated to the beta version.

Make sure you grab the Activator beta and ensure your favorite tweaks have a better compatibility. Activator is heavily integrated with the jailbreak work and order henceforth it is one of the most coolest tools that users can make do with. One other major plus point with Ryan Petrich's Activator is that it keeps itself on the update platform every now and then. While it supports many tweaks, sometimes it denatures the tweaks if not compatible with the iOS version.

Sometimes trouble makes way for better things and Ryan is there to fix any malfunctioning of the tool. This makes him stay ahead in his game before any other makes room. So what exactly is part of this new Activator beta v1.9.2? By word it now supports iOS 8.4 which is a welcome change. Apart from this, there is a fix for Action Banners of iOS 8.2+. To stop other tweaks and extensions from accessing the Activator API, an alert dialogue is prompted on the display. This makes up the most of the Activator beta v1.9.2. 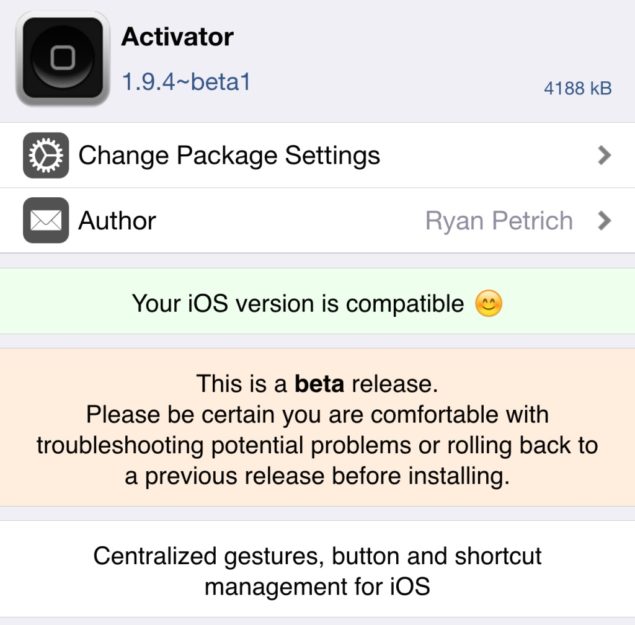 . To install the Activator beta v1.9.4, you need to add and following repo to your Cydia source:

After you add the repo to your Cydia source, it will be available for download. As Ryan's traditional way of releasing a beta before the final launch, users can now give an appropriate feedback to him and highlight adequate functionality of the tool. This is it for the Activator update to the beta with version 1.9.4. Let us know in the comments how do yous liked the update?