We are speedily moving towards better specs, improved hardware features and redesigned software every year - somethings that OEMs are doing to keep their users happy. However, there is one thing that still cannot be termed as high-end or premium and that is the battery life. Even the top devices can hardly sustain a long day if you extensively use your device for work, gaming, browsing, or any other such tasks. Samsung Galaxy Note 4 is also a smartphone considered top of the line and top of the game. This year has brought in even more powerful processor and even better display. Has the battery life been improved too?

Samsung featured two different processing chips in its Galaxy Note 4. Along with the expected Snapdragon, Korean version was powered by the Samsung's first 64-bit Exynos processor. While the processor is made to run on the 32-bit, it is capable of running at 64-bit making the device all ready for Android L. This Exynos variant of Galaxy Note 4 was tested by a Korean site PlayWare who are showing some stunning results of Note being one energy efficient device.

PlayWare has put the Galaxy Note 4 battery through a varied tests including peak brightness, Wi Fi, video playback, 3D gaming, and on-screen time. Setting the brightness level to 230 nits  the devices tested, the battery test showed results which you can see in the following charts. The Exynos Samsung Galaxy Note 4 lasts for 8:30 hours with its screen constantly on with a white image as opposed to G3's 5:38. WiFi and screen on-time are also winning points for Samsung Galaxy Note 4 where it wins over the small resolution Galaxy S5 LTE-A. Here are the charts where you could see that Exynos 5433 Cortex A53 and Mali T760 have a lower battery drain than the Snapdragon 805 and its accompanying Adreno 420 GPU. 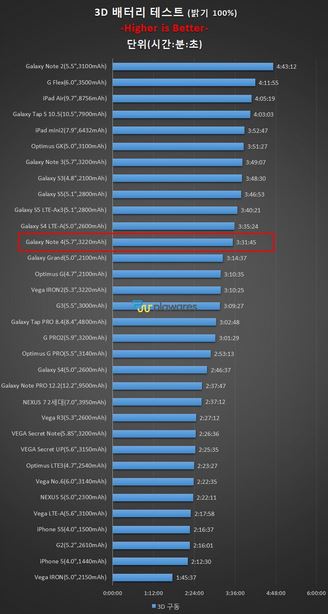 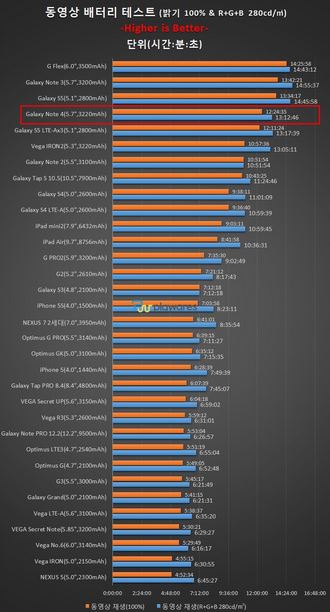 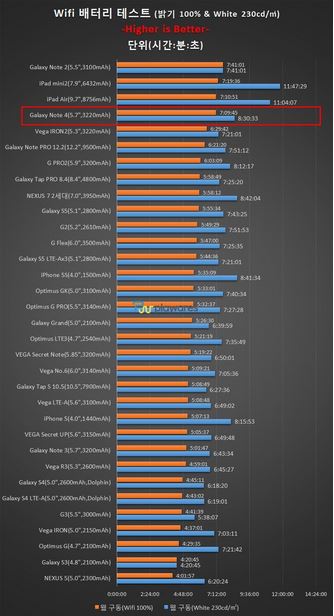