Use Reachability on iOS 7 – How to

Apple introduced Reachability feature on iOS 8 for better one-handed usage of the devices. This feature enables you to access the top portion of your iOS device easily by shifting it downwards closer to the home button. This way, you can easily access the top half with your fingers. Here is how you can use Reachability on iOS 7.

Reachability feature is activated when you double tap - not press - the Home button. This drags the top half of the screen down towards the lower half easy access. If you wanted to use this iOS 8 feature on your iOS 7 devices, you can do so with the help of a small tweak. Called Reachability7, the iOS 7 jailbreak tweak lets you enjoy this feature after you install it and tweak the Settings a little bit by toggling the tweak on.

Taking advantage of the open jailbroken OS, you can assign any custom Activator action if you want some other way to activate this Reachability7 tweak instead of the double tapping on the Home button. Different gestures or taps can be used to access this tweak as Activator will come pre-installed when you download the Reachability7 iOS 7 jailbreak tweak. Reachability on iOS 7 will work on all the apps on the Home screen.

Reddit users suggest to use Reachability on iOS 7 alongside the popular Ryan Petrich's jailbreak tweak VideoPane. Here is a snapshot of videopane being used together with Reachability which enhances the capability of VideoPane as the tweak separates windows in to draggable panes. 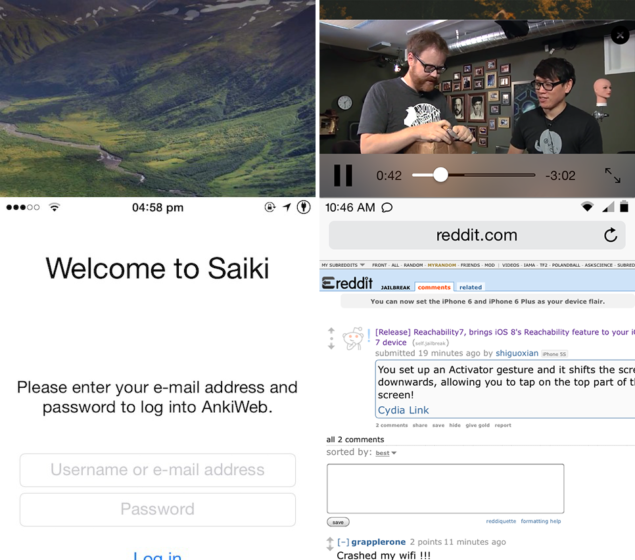 You can search and download the tweak from BigBoss repo of Cydia. Reachability7 is a free jailbreak tweak. If you want to watch the Reachability7 demo for better concept, here it is: