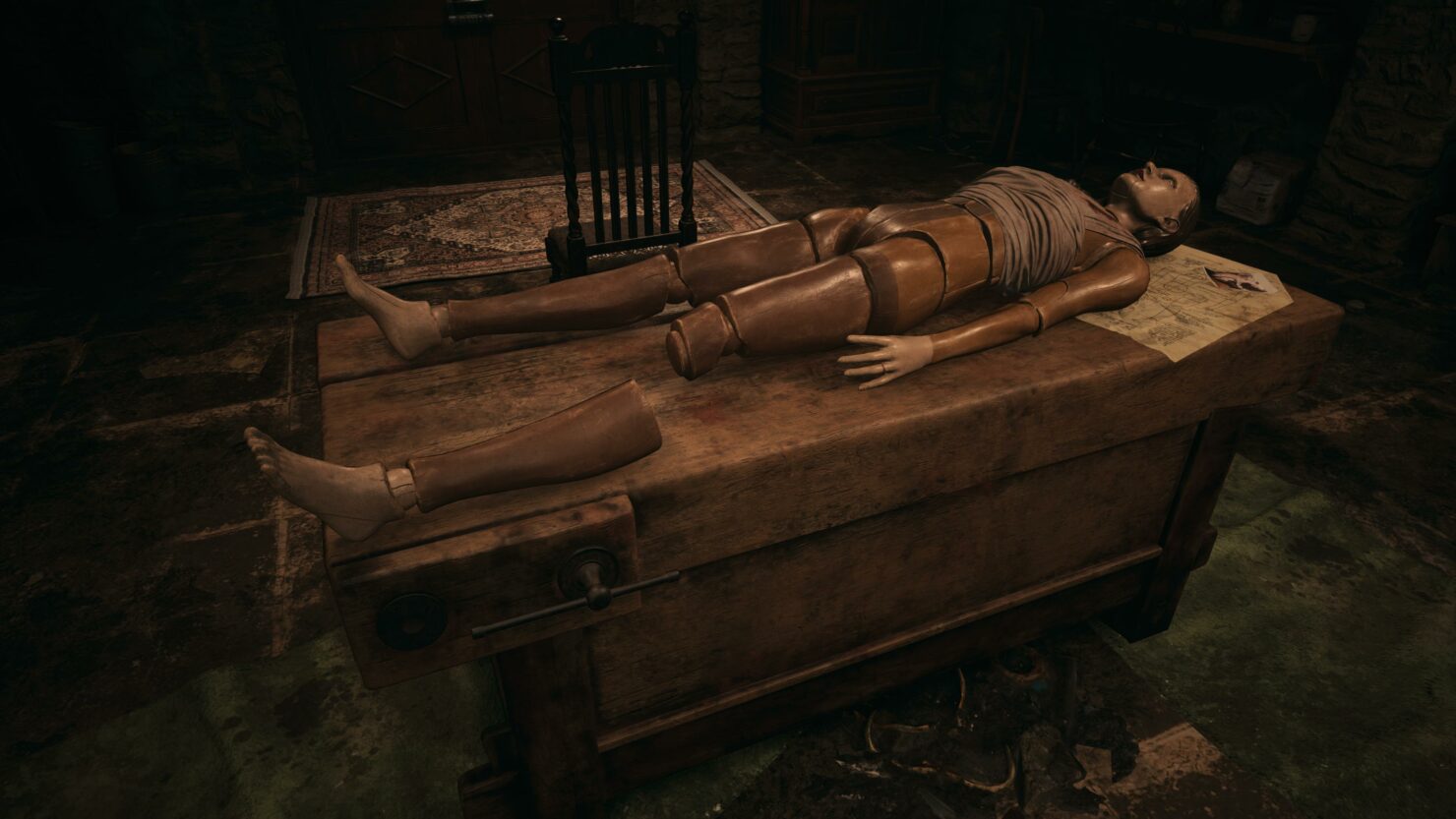 You’ve survived Castle Dimitrescu and escaped the tall lady only to find yourself in a dollmakers basement, and it is creepy. You have no weapons to defend yourself for the first time, and there is definitely something unfriendly in here with you. On top of all that, there is one long, winding puzzle to solve as well.

Luckily, this guide will tell you everything you need to know to escape Beneviento’s Basement, but it can’t help you with the number of creepy dolls you have to walk past. As always, be wary of spoilers ahead as we discuss several connected puzzles and the consequences for completing them.

How To Find The Mannequin Keys in Resident Evil Village

When you first enter the basement, you’re a little unnerved but not overwhelmingly terrified yet. You’re armed to the teeth by this point, and you’re hunting a fairly undangerous children’s toy. Unfortunately, that all takes a rather bad turn when the little blighter steals all your weapons and locks you in the basement.

This first room, the Doll’s Workshop, has three currently locked downs: one that needs a key, one that needs a combination, and on that in classic Resident Evil fashion, needs a missing component. This room also has a mannequin of your wife Eva lying on what looks like an operating table.

What you want to begin with is the Winding Key hidden in her left leg, the wedding ring on her finger, and the Silver Key on her right shoulder.

How to Find the Dollmaker’s Combination in Resident Evil Village

Once you’ve collected all the things from the doll of your wife, use the silver key to unlock the neighboring room. There isn’t much here to collect, especially since ammo would be more or less useless to you right now, but have a look around all the same.

When you’re satisfied you’ve found everything you need, head over to the sink here and use it to clean the bloody wedding ring you collected from the mannequin. Try not to think about why it’s so bloody.

Now that the ring is sparkling clean again, examine it from your inventory. You’ll notice a six-digit code engraved on the inside; pop that into the combination lock to escape into the corridor you arrived through.

Continue down the hall and a door will creak open as you approach. If you’ve ever played PT, you’ll start to feel some unsettling similarities. These will continue in the spookiest way as you explore the Dollmaker's basement.

Enter the newly opened room and you’ll find shelves of useless equipment. However, on the table beyond them is a broken music box that once again relates to you and your wife. This puzzle wants you to arrange the cylinders into the correct order to get the box to play. There aren’t any clues to be found, so the solution must be somewhere on the box or the cylinders themselves.

Look at the wear and tear on the cylinders, and you’ll see scratches that can be aligned by swapping them around. Once you’ve got them in the right order as shown, play the music box to open the small drawer and retrieve the tweezers inside.

How to Solve the Dollmaker’s Film in Resident Evil Village

Now that you’ve got the tweezers, head back to the mannequin in the Doll’s Workshop. Once you’re there, you can interact with the mannequin’s mouth and retrieve the cut of the film that was lodged in there. With that in hand, head back down the corridor, past the storeroom to the study beside the lift.

You might have stuck your head in here before losing all your weapons. Not much has changed since. There is a large film projector on the desk and four cuts of film hanging next to them, with room for one more, and a note describing the order the film should be in.

Add your film to rest and arrange them in the order: the cuddly toy, the creepy book, Baby Rose, the wedding ring, and finally, the music box.

Once they are arranged in the correct order, the film cuts will disappear and the projector will play a Ring-like film of someone approaching a creepy old well. Once that is done, a secret door beside the screen will open.

Enter to find a room filled with dolls, with one menacingly holding scissors. Take those and use them on the bandages at the far end of the room to open a shortcut between the study and the room with the sink.

How to Reach the Dollmaker’s Well in Resident Evil Village

With the scissors in hand, return to Mannequin for the final time, using the shortcut you’ve literally just cut open. Use the scissors to open the bloody bandages on the mannequin and retrieve the Brass Medallion. Before leaving, you’ll also want to examine her eye and make a mental note of the bird's position, as well as the number of open eyes inside her elbow joint.

Once you’ve done all that, head to the only locked door remaining in this room, apply the Brass Medallion to the missing depression and align the other two pictures to what you saw on the mannequin. The door will open once everything is in order, leading you down the same staircase you saw in the film moments ago.

Once you reach this subbasement, climb inside the well and reach the bottom to find a discarded mannequin with the Breaker Box Key on its finger. This will unlock the breaker box beside the lift, but you aren’t out of the woods yet.

The cradle you walked past to reach the ladder has been destroyed, and you’ll be able to hear crying as you climb the stairs to the Doll’s Workshop once again.

Back in the now darkened Doll’s Workshop, you will see that the mannequin is now missing, and there is a lot of blood everywhere.

Slowly head down the corridor to the lift, but get ready to turn and run when a gigantic, screaming, bloody baby crawls around the corner. Sprint back to the workshop and through the shortcut you opened to make it to the study and then open the Breaker Box by the lift. Unfortunately, there isn’t a fuse in there, but there is a relief of a child which you should pick up. At this point, the baby should stop chasing you, for now.

Where to Find the Dollmaker’s Fuse in Resident Evil Village

Head back into the study and through the bandaged opening, following the corridor until you spot a suspicious doll lying in front of a door. The door will have the relief of a woman on it, and you can add the child’s relief to open it.

Inside, follow the path to the bedroom at the far end, and maybe take a moment to learn the route, just in case you have to sprint down it again in a few moments. In the bedroom, you’ll find a fuse box on the far wall, take it, and be plunged into darkness.

Begin making your way back from the corridor until the baby makes another reappearance. Once they are chasing you, return to the bedroom and hide under the bed. You will see the baby crawl into the room to search for you. Once they’re on the other side of the room from the door, crawl out and run for the lift.

Replace the fuse box to call the lift and leap in as soon as the doors open. Hit the button to ride the lift out of the basement and, more importantly, away from the baby.