Resident Evil Village launches today, and whether you’re a newcomer or veteran of Capcom’s series, you may need some survival tips as the game introduces a number of new mechanics and twists to the series’ classic formula. Get the lowdown on combat, crafting, the shop, finding your way around, and more! Grab some green herbs and shotgun shells and let’s go…

Note: These tips are for those playing on Standard difficulty – if you decide to play on Hardcore or Village of Shadow difficulty, well, I assume you know what you’re getting into.

While Resident Evil Village is played from first-person perspective, don’t expect a full-on FPS experience. Ethan Winters can dash forward at a decent clip, but his maneuverability is pretty limited. This can be bit frustrating at first, but remember – unlike most FPS games, RE Village allows you to block. Hold down L1 to get your arms up and reduce damage and tap it at just the right time as an enemy attacks to do a parry of sorts, further reducing damage. This game is meant to be played with blocking, and if you master the mechanic, you’ll find yourself consuming far fewer First Aid Meds.

Kill Everything that Moves

Traditionally, Resident Evil games have forced players to choose between killing enemies and avoiding them to preserve ammo. This isn’t really the case in Resident Evil Village, and in fact, you may be hurting yourself by dodging past too many baddies.

RE Village features both crafting and a merchant, the Duke, who will sell you items and upgrades. Defeated enemies drop both crafting materials and currency, so unless you’re a really terrible shot, you’ll get back the ammo you use via crafting and the money you make killing enemies will get you better stuff in the store. Also, the enemies in RE Village are pretty persistent, and leaving any alive just means you’ll get attacked from behind a few seconds later. So yeah, toss your RE preconceptions aside and spare nobody. 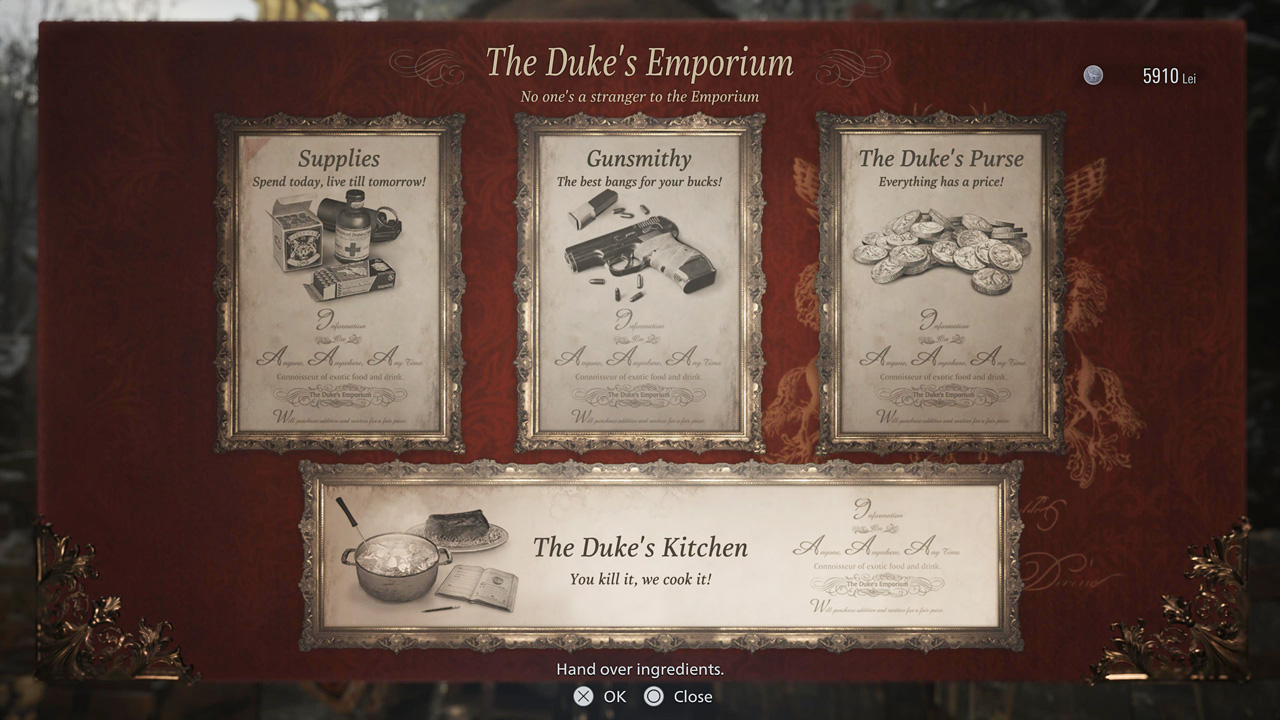 Take the Time to Do Some Hunting

Speaking of killing everything, you’ll occasionally come across various critters in your journey – pigs, chickens, fish, even llamas – and you’re going to want to quiet your inner animal lover and take them out too. It may seem a little silly to take time out from your tense adventure to shoot chickens, but The Duke has recipes he’ll cook up for you if you bring him certain types of meat.

The meals the Duke cooks aren’t just one-off powerups either, they represent permanent and often very useful upgrades. For instance, cooking is the only way to increase your health or improve your block. You’ll also occasionally stumble upon clues that lead you to certain rare animals – tracking these down is worth it, as they’re required for some of the better recipes. 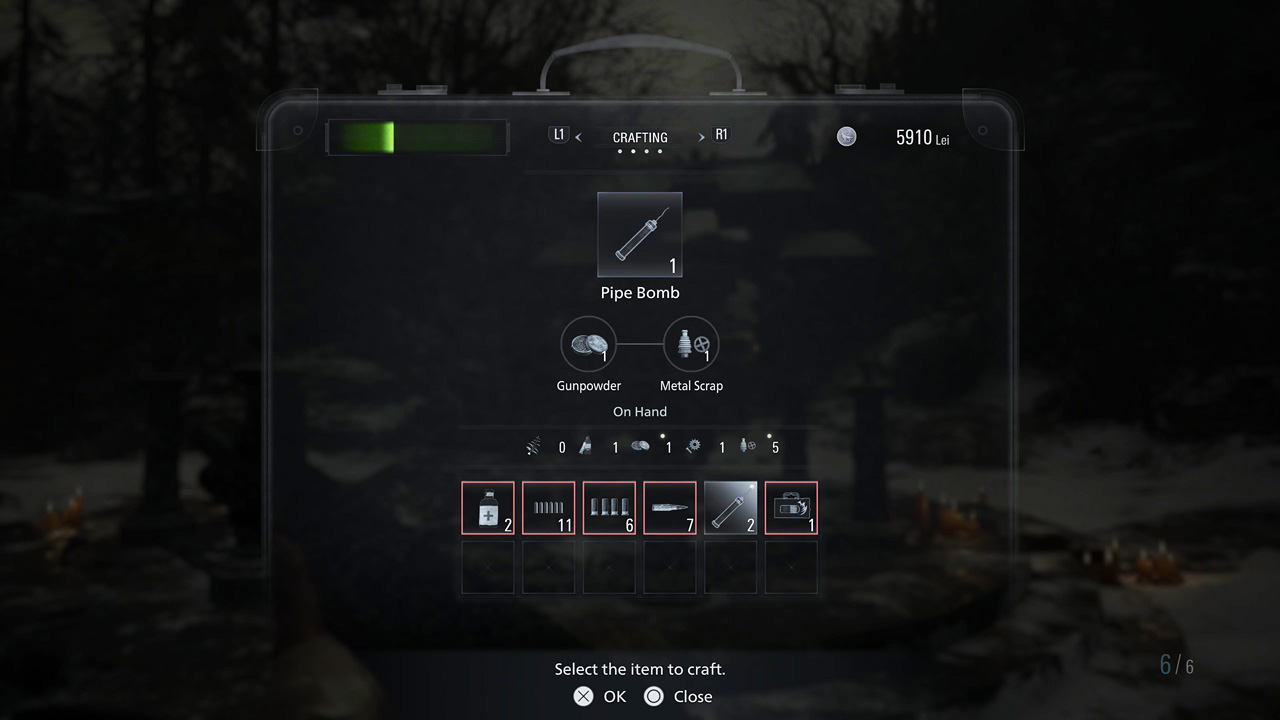 How should you best spend your crafting materials? There’s a relatively small number of different crafting materials in the game, with certain items like gunpowder or chem fluid being required to craft multiple things, forcing you to make some choices. Well, I’m here to tell what you shouldn’t use your precious crafting materials on – handgun ammo. Why not? Well, you’re going to find a good amount of it just laying around and it’s weirdly expensive to craft. Gunpowder is one of the most crucial resources in the game and a bundle of handgun ammo consumes 2 gunpowder, while shotgun shells only require 1 gunpowder.

Okay, so what should you be focusing on? Explosives my friend! Pipe bombs and mines are not only inexpensive to craft but quite powerful. If you’re up against a large group of enemies a couple of well-placed pipe bombs will make all the difference. They also open up some secret areas. Supplement them with a few shotgun and rifle rounds if you want, but don’t waste your time on handgun ammo.

Managed to get yourself turned around? Not sure where to go next? Don’t worry, just look for some yellow. Guiding players to important items or locations with the color yellow has been a Resident Evil tradition for a while now, but the more open RE Village pushes it a little further, often using yellow paint, cords, and other things to create a pretty clear path for you. 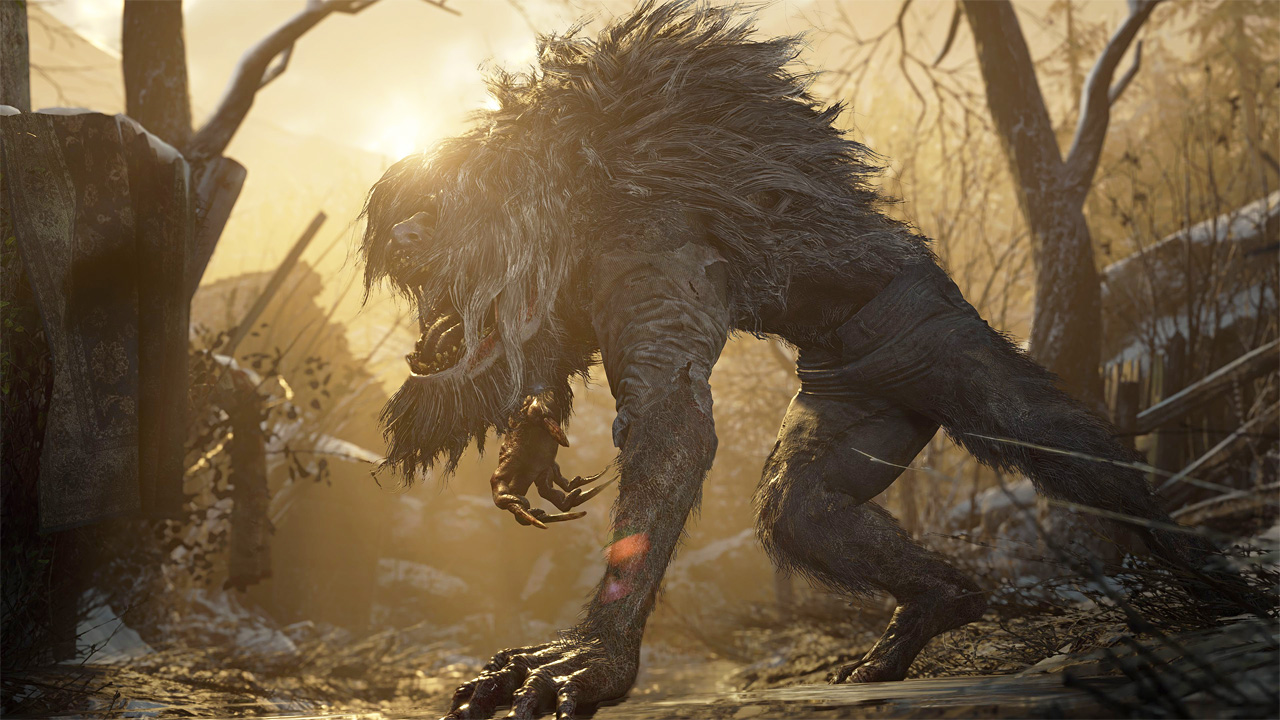 ...but Take in the Side Attractions

While it’s fairly difficult to get lost in Resident Evil Village if you pay attention, you shouldn’t get too fixated on the main path and miss the side diversions. The RE Village map marks treasures clearly and typically there aren’t too many branching paths ahead of you. With the exception of the central village hub, which is a bit more complicated, there’s usually a main path, a side path, and that’s it. These side paths are almost always worth going down as they’ll often contain a kickass new weapon, a treasure you can sell to the Duke, or sometimes even some unique enemy and miniboss encounters you wouldn’t see otherwise. So, make sure to slow down and take in the putrid air now and then.

Looking for some more specific tips for Castle Dimitrescu? You can find out how to open the Maroon Eye Door here and solve the Wine Room puzzle here.

You can also check out the first few minutes of the House Benviento section of RE Village below, including several puzzle solutions (Warning: Contains SPOILERS)...

And there you have it. A few tips that should make surviving Capcom’s latest survival horror game just a little easier. Feel free to share any tips of your own below as you play through the game! Resident Evil Village is available now on PC, Xbox One, Xbox Series X/S, PS4, PS5, and Stadia. You can check out Wccftech’s full review of the game here.