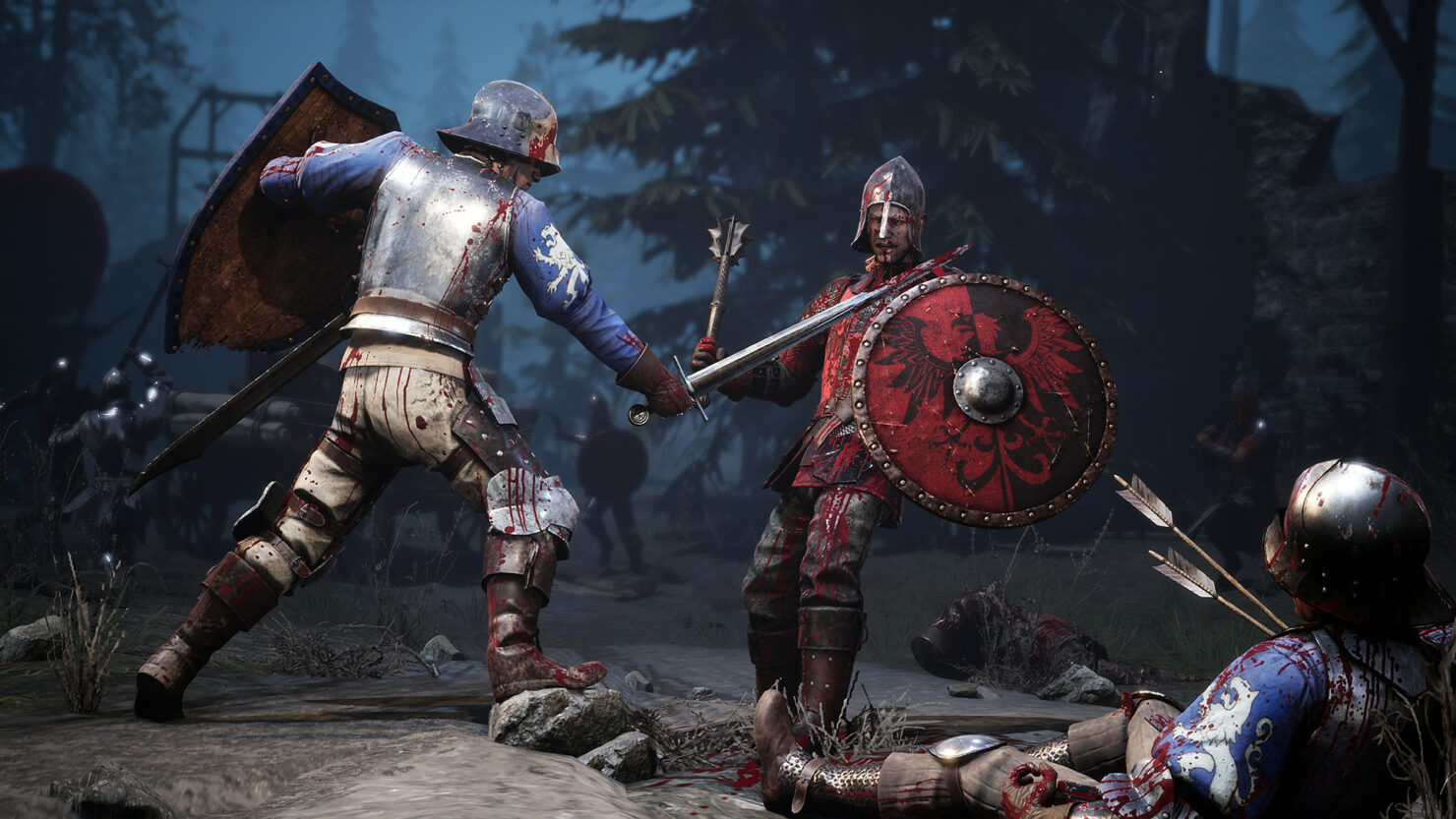 While it might not look like it on the battlefield of Chivalry 2 with all the limbs, blood, and fire, there are actually different classes that have different roles beyond impaling your enemies. A Footman is the game's support class.

The Footman's job is thus to keep the rest of the team alive through heals and ranged defence, but with so much out there trying to kill them, it can be tricky to use the Footman's abilities to your advantage. This guide will walk you through everything you need to overcome the overwhelming opposition in Chivalry 2. 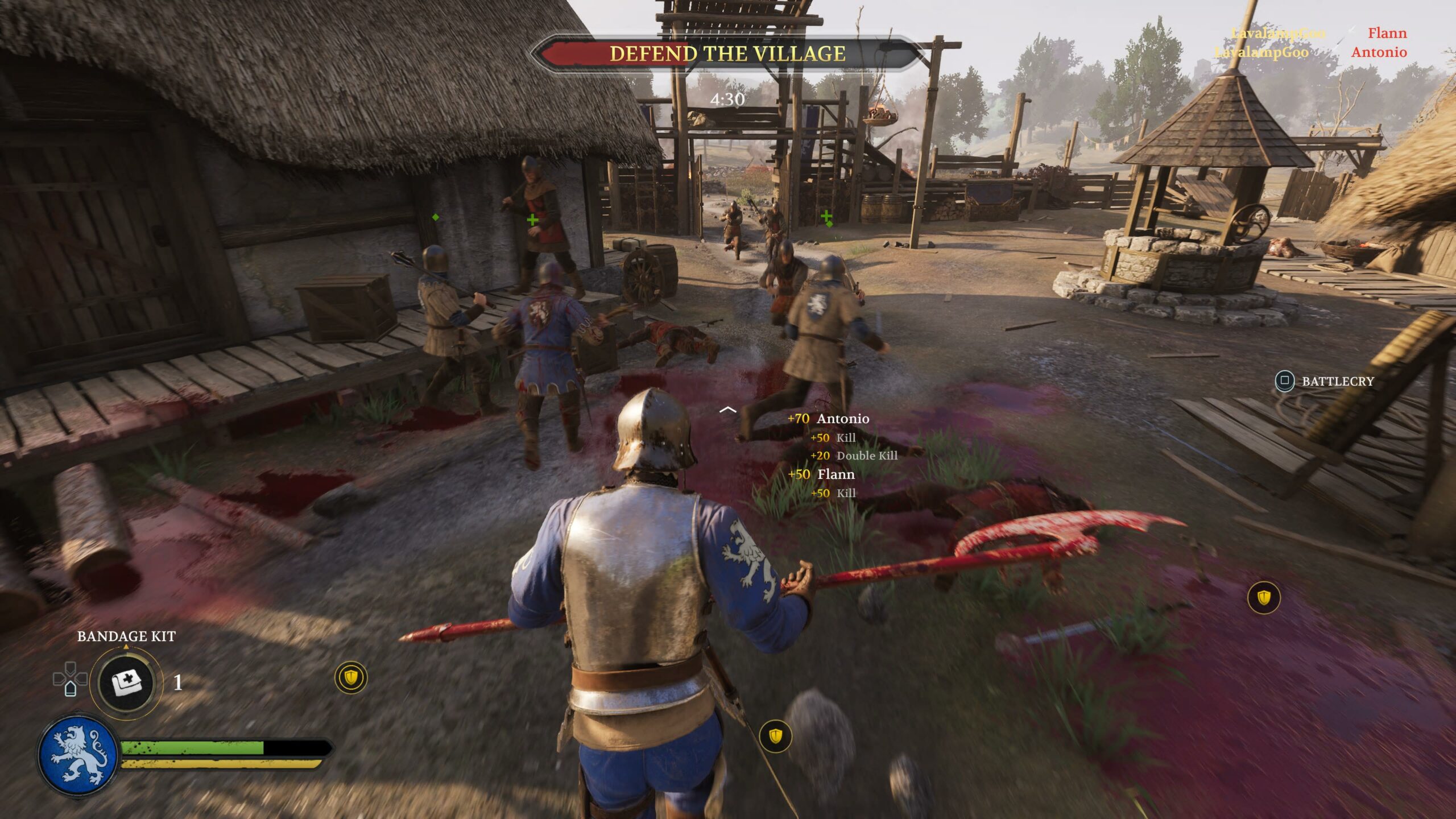 Everyone in Chivalry 2 starts with a single bandage that can heal them slowly when activated. The footman can offer additional healing to those injured and unable to recover. The bandage kit can be thrown to allies offering a small parcel of healing to those in the most danger even if they've used their own bandage already.

This is fantastic for your team since respawning can take a player out for nearly a minute so make sure to throw them down when you see teammates with the green cross above their head. Remember, though, that the kit heals slowly and will be interrupted if they take any more damage when it's working. It can be life-saving during a fight, but if you happen to spy a wounded comrade between waves of attacks, send it their way before the next battle starts.

The bandage kit cooldown is reduced for healing and picking allies up, too, so if you see a downed friend and you can get them up safely, it's well worth doing so. And with your polearm, you can try and push the enemies back before they can deliver the fatal blow. 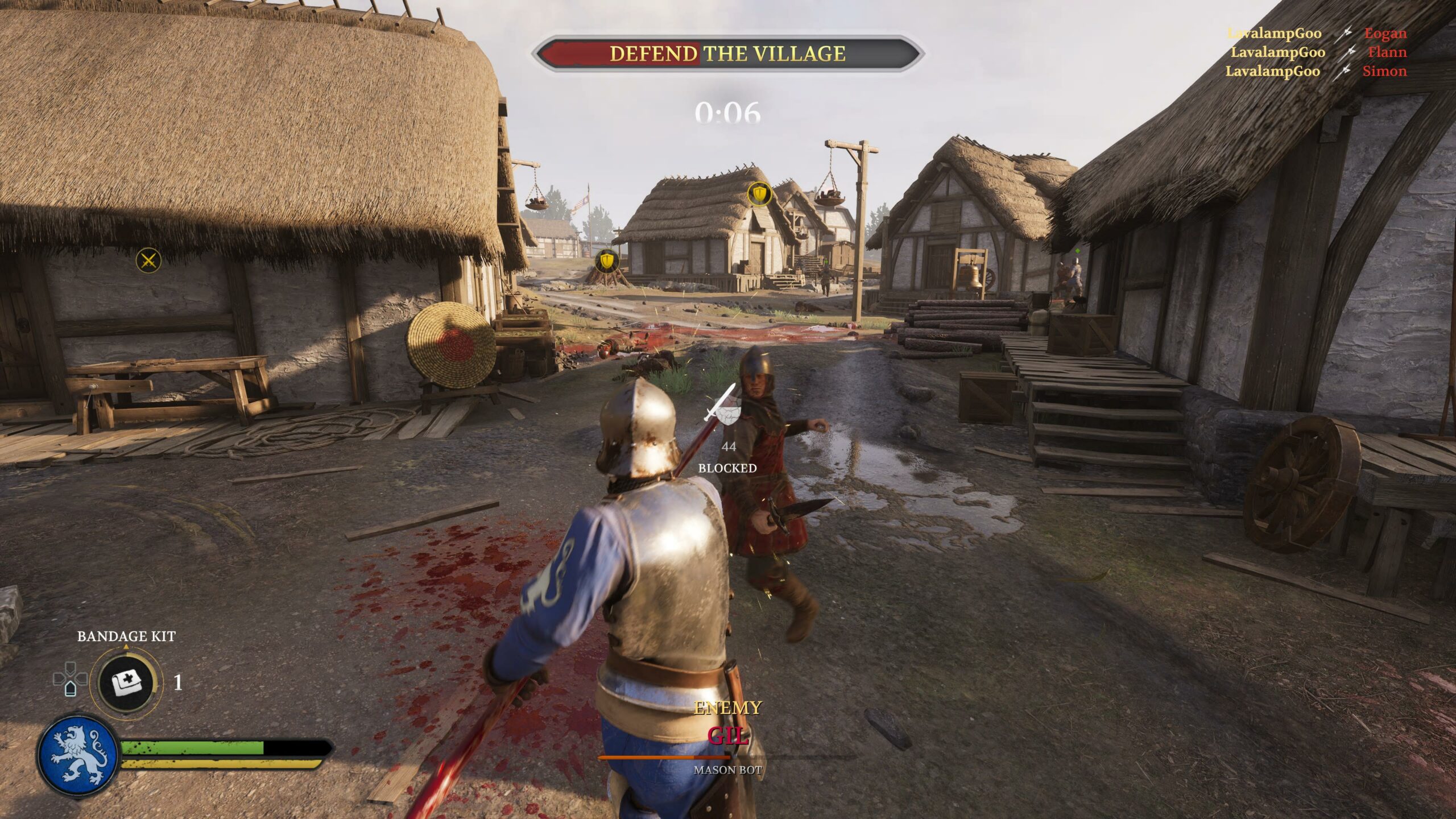 The first Footman subclass available is the Poleman. This class is focused on using your longest weapon (the halberd) to keep the enemies back, so make sure you've learned your range. Knights and vanguards won't be able to strike at the edge of your range, so do everything you can to keep them out of range of attacking you. Dodge back when they get close and use the thrust attack to hit them from as far away as possible.

You can also use this to help your team out as well. If you're in a small band and your starting to get flanked, use this range to keep one side at bay and pray that your teammates can use the advantage to open up their side of the fight.

Likewise, use your allies to make your range even more effective. If a frontline develops, make sure you're one back from the threshold. This way, you can use your thrust attack between your allies to deliver damage, safe from most counter-attacks. It also means you can see who needs help easily and without having to wheel around the whole battlefield. Even if you're not in a full phalanx, keeping behind a single Vanguard or Knight can make you a much more effective fighter than trying to flank and exposing yourself. 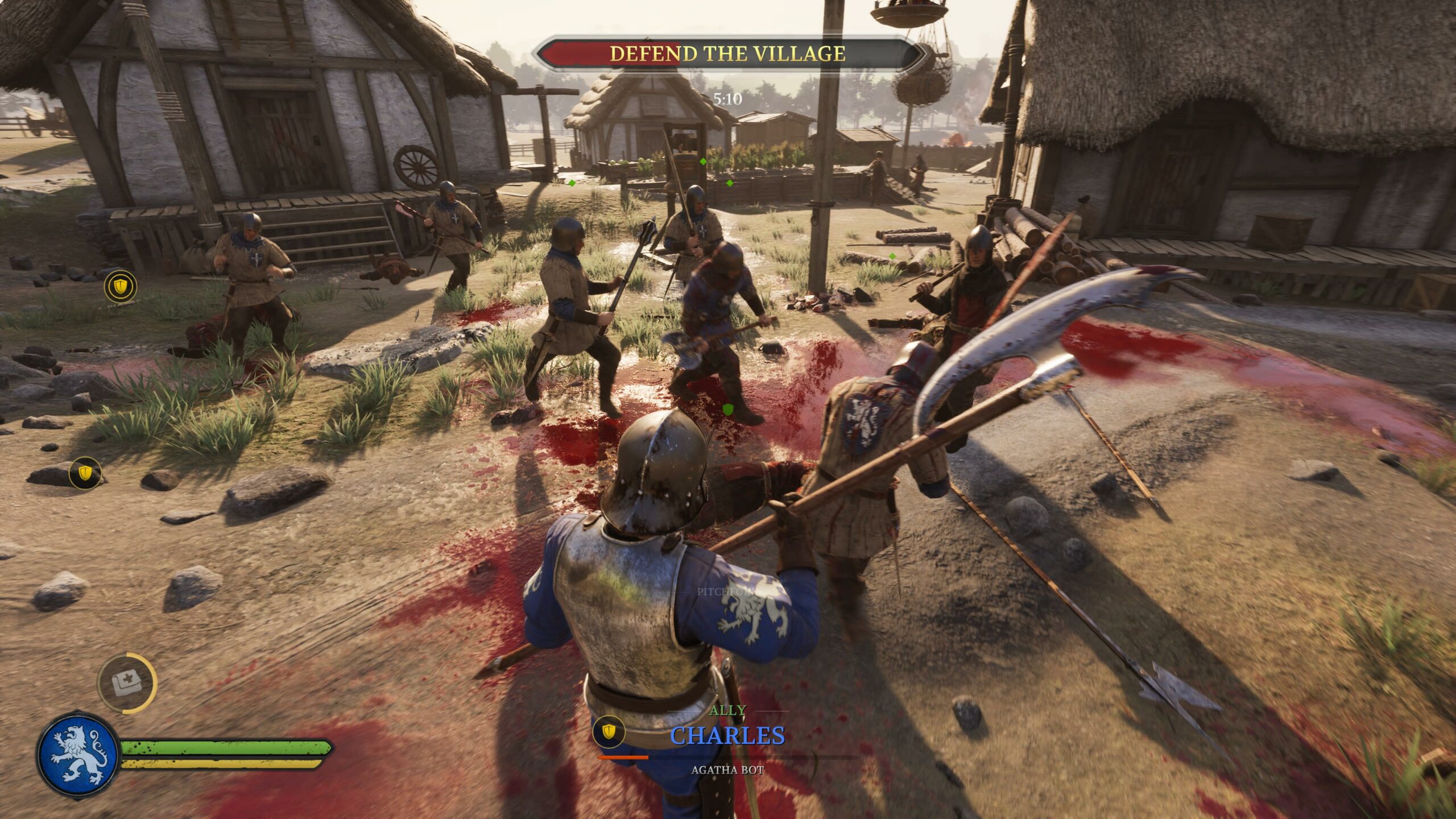 Knights are the tank of the fight, and Vanguards are the damage dealers. As a Footman, you are essentially the support, and as such, you aren't expected to stand your ground. If the fight is lost, you're outnumbered and alone run.

A Footman is at his best with teammates around, where you can reach in with a few jabs, and they can deliver the rest of the damage when it's safer. Your own swing is effective, with a wide arc and decent length, but your damage isn't as great and you'll quickly get mowed down. 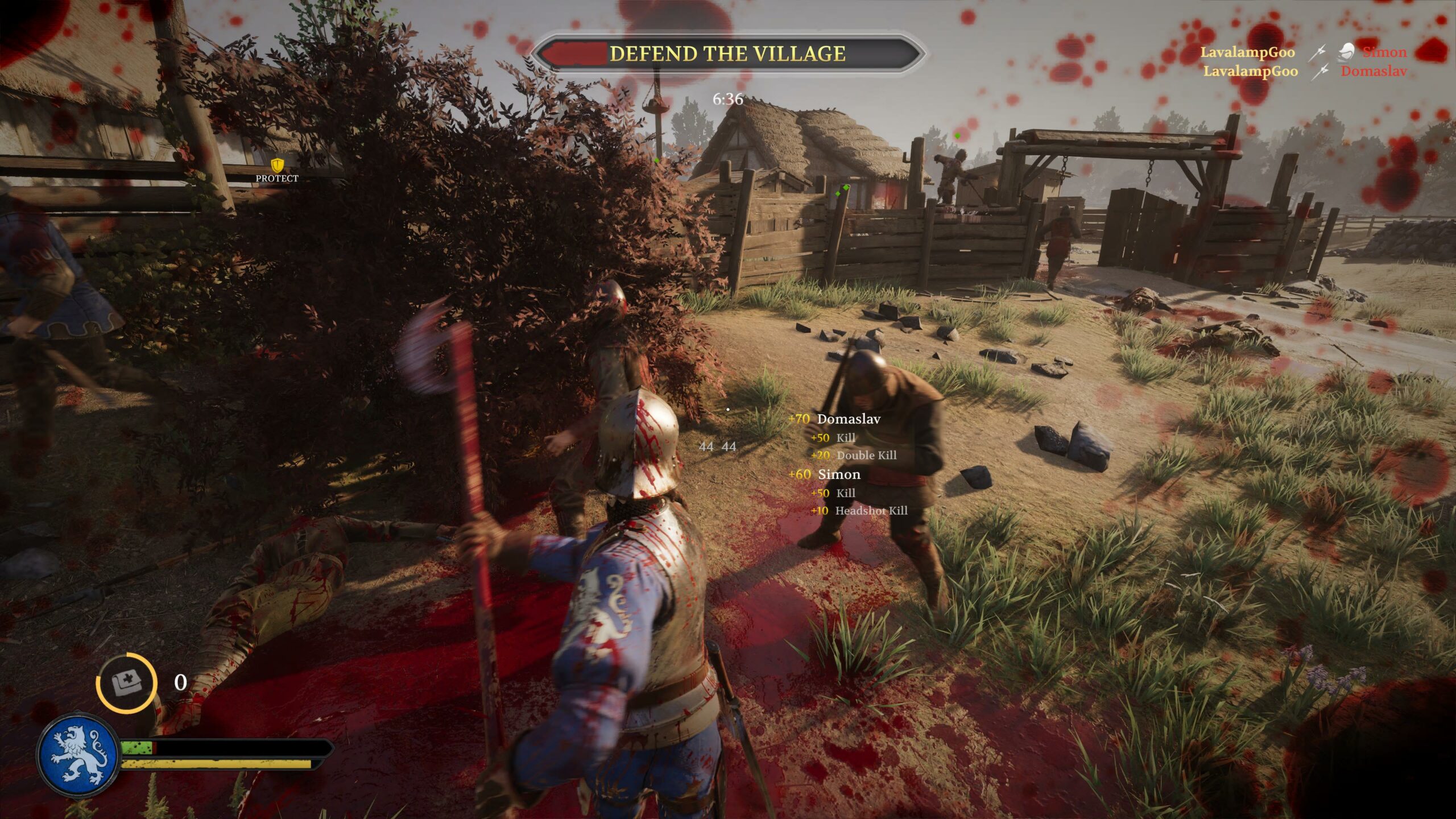 All that being said, you are not a medic like others. You have a big weapon and a bit of armour and by the masons, you will use them. A Footman is not weak; he's just much stronger in a group and when on the move.

Run in a straightish line for long enough and you'll be able to activate your charge ability, which in the polearm's case is basically a joust without the horse. You put the pointy end of your stick in front of you and impale the next person you run into.

This can be deadly, even for people at full health, and is much easy to aim than some of the other charging abilities. So that means when you see a fight off in the distance and your team heading in to join the fray, you should be at the front of the pack, leading the way weapon first.

Once you get into the action, though, make sure you're keeping track of your teammates, and think about dropping behind the knights and vanguards to extend the advantage of your reach.