Additionally, Remedy CEO Tero Virtala also shared some very interesting statements on the status of the Finnish studio's projects, starting with the Vanguard multiplayer-focused one (which Communications Director Thomas Puha had briefly discussed in a previous interview with Wccftech).

The team working on Vanguard – a project also based on our own IP – has taken the game’s internally playable development version further, continuously evaluating, learning and adjusting the development. Some parts of the game show very good promise, some parts have been redesigned. We continue this iterative Vanguard-development with a mission to combine long-term service-based multiplayer experiences with Remedy’s unique game style. The game is developed with the Unreal 4 engine and the early phase work continues with a small team.

Remedy is also hard at work on the two unannounced games that will be published by Epic Games. Virtala provided a brief update on both and even disclosed the finer terms of the publishing deal.

Our third unannounced project has proceeded well. We also have an additional smaller-scale project in development within the same franchise. Remedy had several good publisher candidates for the projects and we chose to sign a publishing deal with Epic Games. They were the best fit for these games, based on their experience as a developer, track-record of expanding into new areas of gaming business and ambition to take game publishing to a new level. As the publisher, Epic covers development and marketing costs. Once these costs are recouped from game sales, Remedy receives a 50% share of net revenue. Both projects are based on a game IP created and owned by Remedy, and we retain full creative freedom and ownership in this regard. 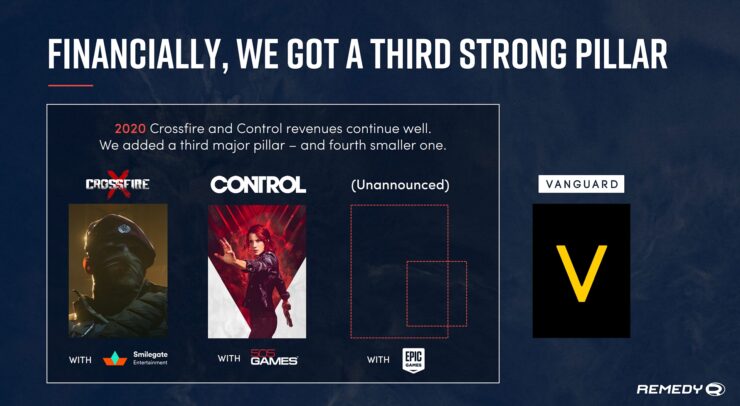 Other highlights include Remedy's ongoing efforts to improve the Northlight engine to support next-generation consoles (Control is, after all, getting a PlayStation 5 and Xbox Series X release).

In related Remedy news, check out the debut gameplay footage of the second and final Control expansion, AWE.

Remedy Implements Body Throwing in ‘ Control ‘; Still “Very Rough Around the Edges and Far From Finished”