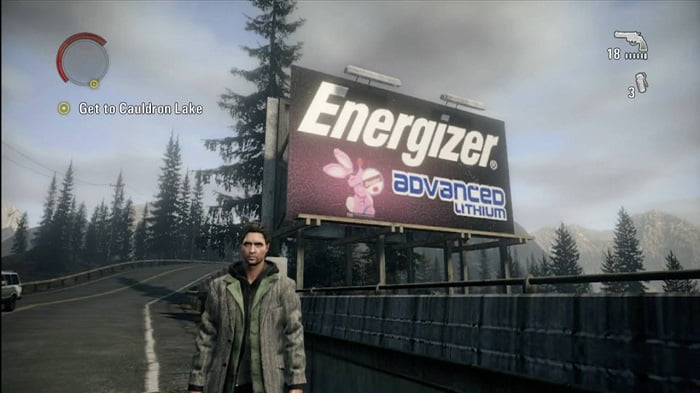 Remedy Entertainment has recently confirmed that the previously commonly found product placement for Alan Wake Remastered will be replaced by fictional brands. In other words, the game won't feature products from brands like Verizon and Energizer. The company cited expiring brand deals.

The brand deals with Energizer, Verizon, Ford, Lincoln, and many other brands have all expired. Instead, the game will feature fictional brands made with generic in-universe branding. However, songs and TV shows from the original game will make a return. It's unclear if Remedy will make any attempt to bring back or add new product placements.

Speaking of features that won't be found on Alan Wake. It's recently been confirmed that Alan Wake will not have Ray Tracing or HDR support. While the remaster will offer improved visual effects and lighting alongside enhanced character models, and richer environment details, Adding HDR and Ray Tracing support would have been too time-consuming for the team handling the remaster. You can read more about this news here.

Alan Wake Remastered is a game made by Remedy Entertainment, which stars the famed writer Alan Wake. When the wife of this best-selling writer disappears during their vacation retreat in Bright Falls, Alan goes on a journey to find his missing wife while finding pages of a manuscript of a thriller he doesn't remember writing.

Meanwhile, a Dark Presence is revealed to be following Alan wherever he goes, causing people to become hostile and turning them into shadowy, psychotic versions of their former selves. Alan is forced to use multiple weapons to fend off the enemies while he unravels the mystery that has taken over the small town and eventually finds a way to save his love from the forces of Darkness.

Alan Wake Remastered is going to release on Xbox Series X, PlayStation 5, and PlayStation 4 alongside PC via the Epic Games Store on October 5.