The popular jailbreak tweak, Activator has just been updated today by iOS developer Ryan Petrich. Activator has been a popular tweak with several impressive offerings. These include using the Touch ID for multiple activator actions. In short, Activator lets you assign actions to events. The events automatically occur when the action, chosen by you, is performed. Well, activator has just been updated today and this update makes the extension compatible with iOS 7.1.1 and later versions. 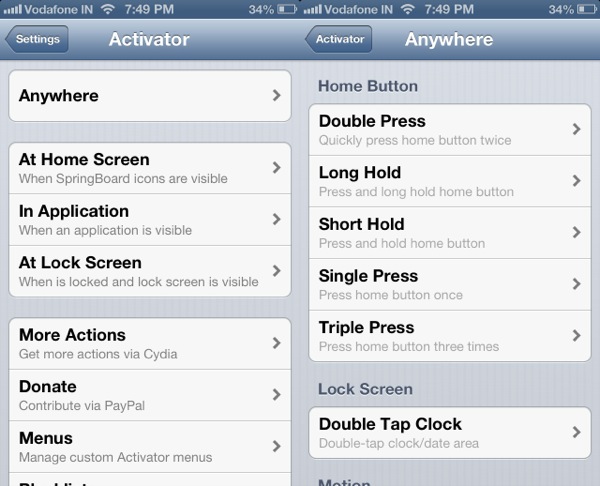 Activator 1.8.4 Beta Gets Better User Interface, Adds A Lock Screen Swipe Down Event Amongst Others

With the update, several new features have now been added to the Activator tweak. The Activator 1.8.4 beta ends up getting a better user interface which allows better facilitation of multiple assignments. In addition to this, several new events have been added to the tweak as well. These include a lock screen swipe down event and support for slide and touch events on the iOS 7.1. Also, the update includes several fixes which include fixes for icon rendering in the settings pane and fixes for triple click events in iOS 7.1. The full changelog for the tweak is as follows:

Of course, it should be kept in mind that the update launched is a beta version of the tweak. So you should be prepared for potential problems or a rollback to the previous version. In addition, you will have to add http://rpetri.ch/repo to your Cydia sources if you wish to access the beta.