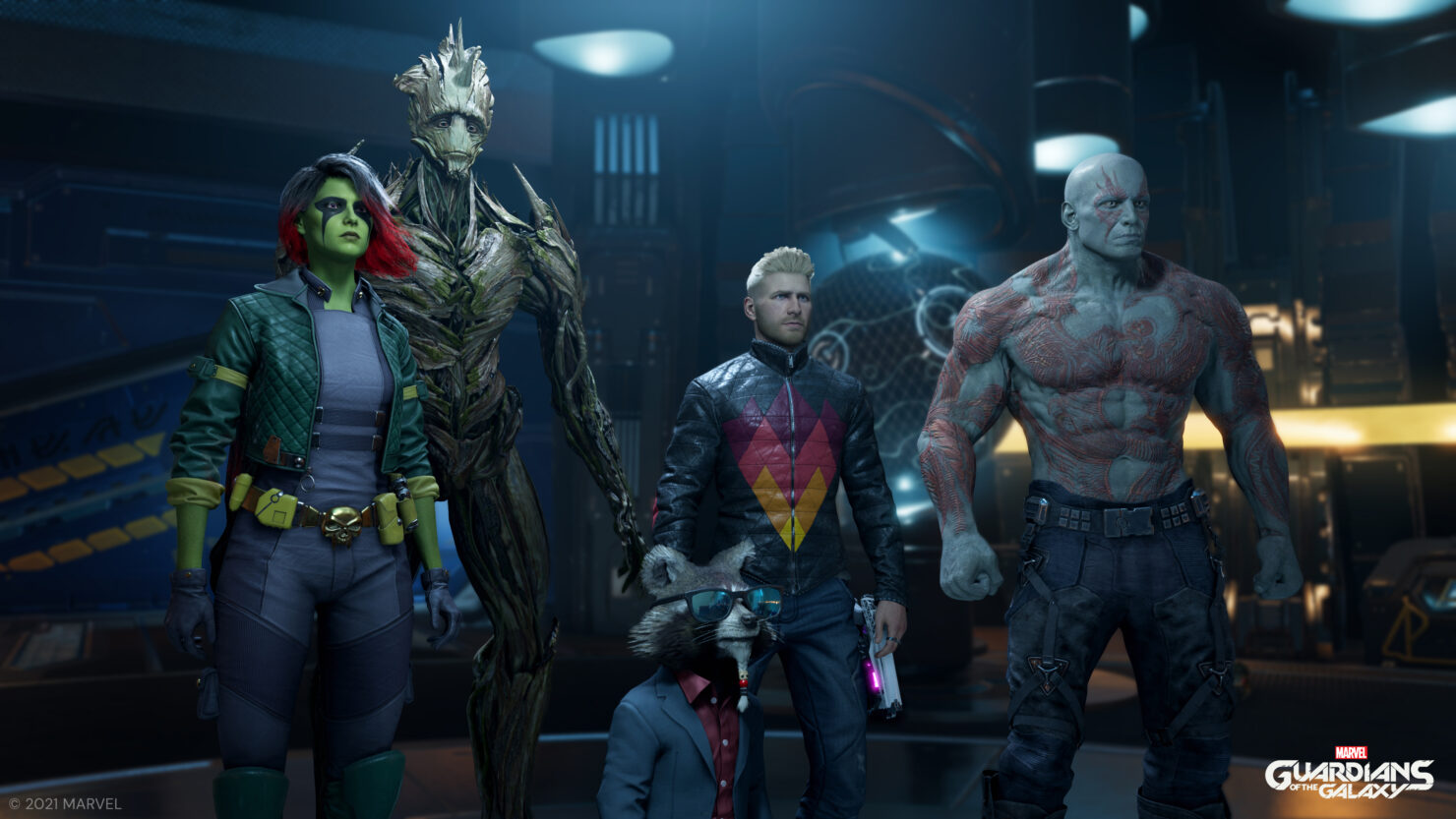 Shortly after Square Enix announced the multiyear partnership with Marvel back in 2017, rumors began circulating that Eidos Montréal would develop a Marvel's Guardians of the Galaxy game while Crystal Dynamics focused on The Avengers.

Fast forward to E3 2021, and Square Enix finally unveiled it. Unlike Marvel's Avengers, however, this turned out to be a single player only game with no DLCS or microtransactions planned.

Last week, we had the opportunity to play a remote demo via Parsec and came away confident about the potential of Marvel's Guardians of the Galaxy. The demo didn't start at the beginning of the game, taking place right after the encounter with Lady Hellbender instead. At this point, the Guardians were forced to dock at the nearest Nova Corps station (despite Rocket protesting that they really shouldn't be going), called The Rock, to pay a massive fine they got from some trespassing activities. This is necessary because Nova Corps have put a tracker on the Milano spaceship, and the Guardians would really like it to be removed as soon as possible. Obviously, what was supposed to be a quick stop in a safe space turns out much differently as the Nova Corps are nowhere in sight, and when Star-Lord and his crew finally encounter them, they've clearly gone mad (likely because of the Church of Truth). 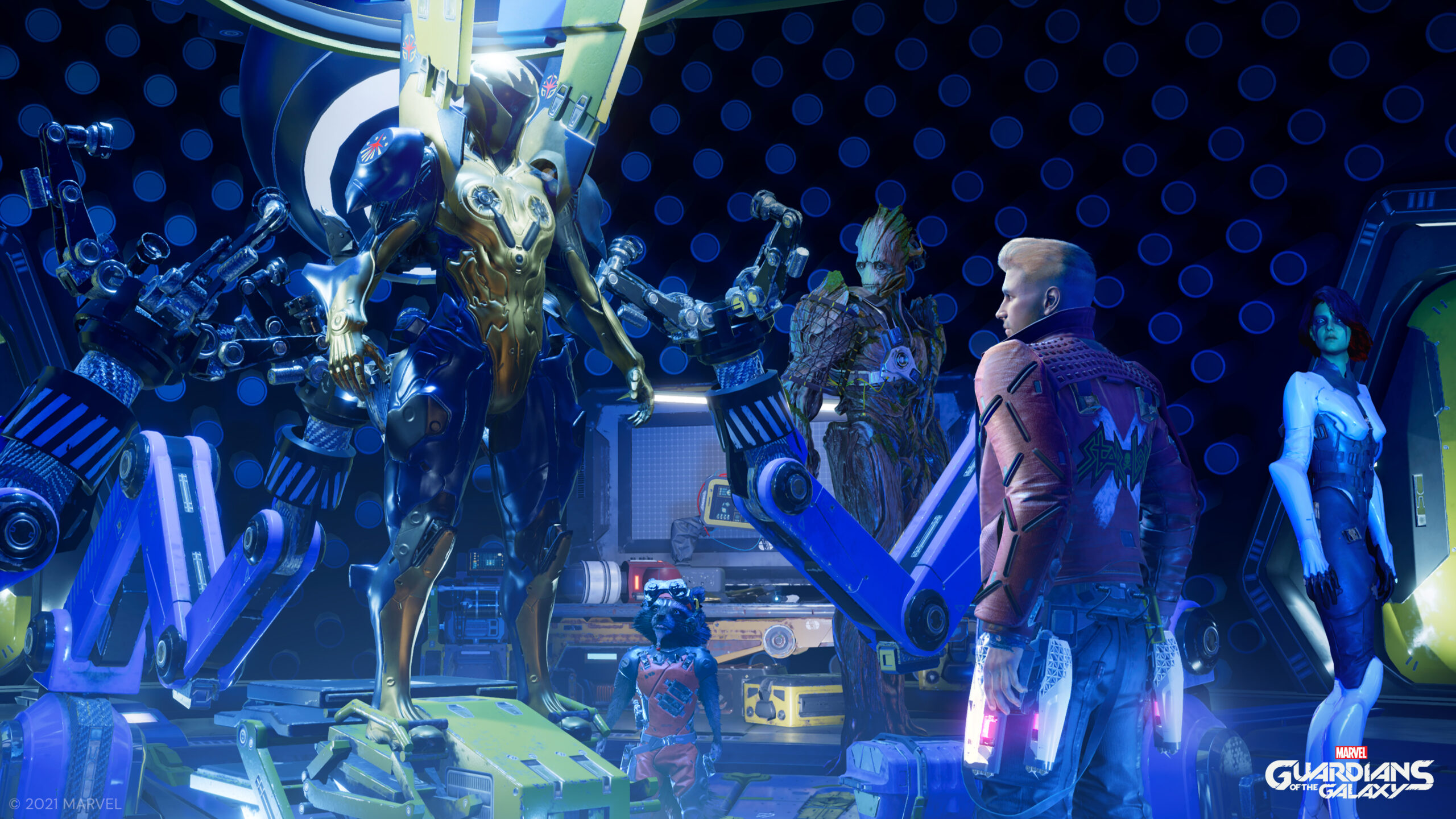 Before docking, we had the opportunity to spend time aboard the Milano spaceship. While the game features a lot of humorous banter (thanks to some great voice acting) between the Guardians even when exploring the various locales, it's on the Milano that most of the proper conversations will take place. This is largely optional but highly recommended for those who want to dive into the RPG-like aspect of Marvel's Guardians of the Galaxy. Roaming around the Milano and into each Guardian's room lets you learn a lot more about their past, tightening the relationships within the team.

The Milano is equipped with a workbench, too, where players can upgrade abilities or equipment after gathering parts while they're on a mission. According to the developers, this is meant to be more of a bonus for those who explore every cranny looking for materials and collectibles, but you won't actually require all these upgrades to go through boss fights and complete the game.

Unfortunately, the remote connection via Parsec didn't hold as well as it did in other remote previews this time around, making it harder for us to properly experience the combat since it was essentially impossible to perform timely dodges and the like.

That said, you'll always be playing as Star-Lord in this game, though as the team leader Peter Quill can also select a specific Guardian (bringing up a menu that slows time) to activate one of their unlockable abilities. Star-Lord himself is a speedy character who can smack enemies up close but mainly relies on his twin pistols, which can trigger elemental effects such as frost, air, fire, and water. During the demo, we had access to the frost element, useful to momentarily freeze up certain enemies and solve a few of the puzzles interspersed between fights. 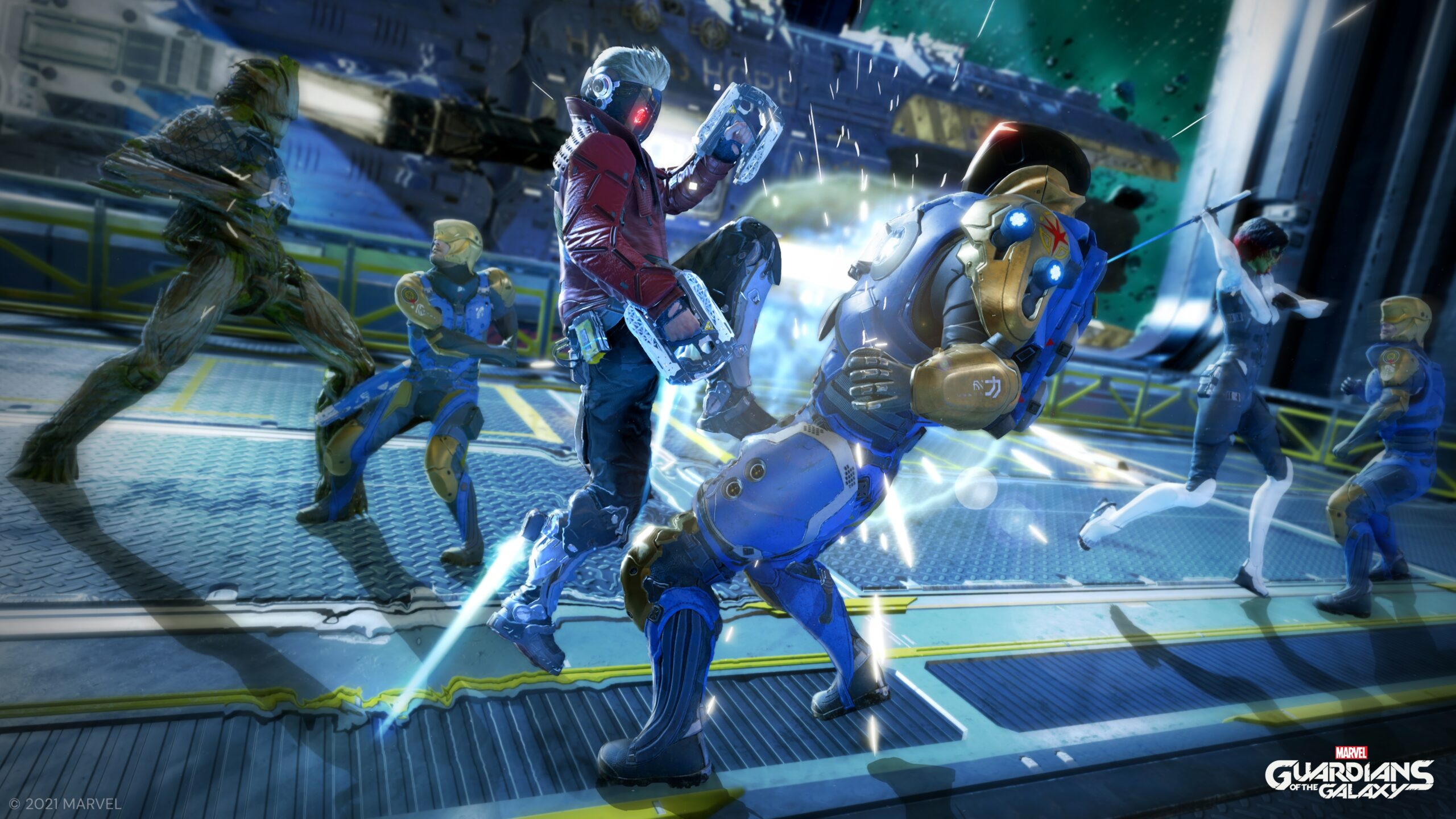 Understanding which abilities work best together will be the key to performing well in combat; you can check up some examples in the footage below. Each Guardian has an area of expertise: Groot has abilities to entangle enemies, Gamora does the most single target damage, Rocket does the most area of effect damage, while Drax does the most stagger damage. However, that doesn't mean they cannot be equipped with abilities that mimic a fellow Guardian's skillset, albeit with less effectiveness.

Furthermore, in a manner not unlike Devil May Cry and other stylish action games, your combat performance is constantly rated through a series of adjectives that pop up on the left side of the screen. The higher the Momentum, the better the chances of prompting a joint attack (executed through a Quick-Time Event) between two Guardians. Such attacks tend to dramatically change the flow of the battle in the Guardian's favor; in the demo, we saw Rocket jumping on the back of a Grenadier, a particularly nasty type of enemy, to destroy its power pack and deactivate its shield.

Similarly, there will be environmental attacks that can be triggered by directing a specific character to it. For example, Drax could pick up nearby explosive barrels and hurl them toward foes at Star-Lord's command.

One combat mechanics that's well worth discussing is the so-called Team Huddle. This is essentially an Ultimate bar filled by executing attacks and abilities. Upon triggering Huddle, though, you enter a sports-like timeout segment where the Guardians of the Galaxy gather around Star-Lord. At this point, some of the Guardians will convey their current emotional state by uttering a couple of phrases whose keywords will be highlighted on screen. As Star-Lord, you'll have to decipher these keywords to understand exactly the kind of speech your team needs at that moment in time. 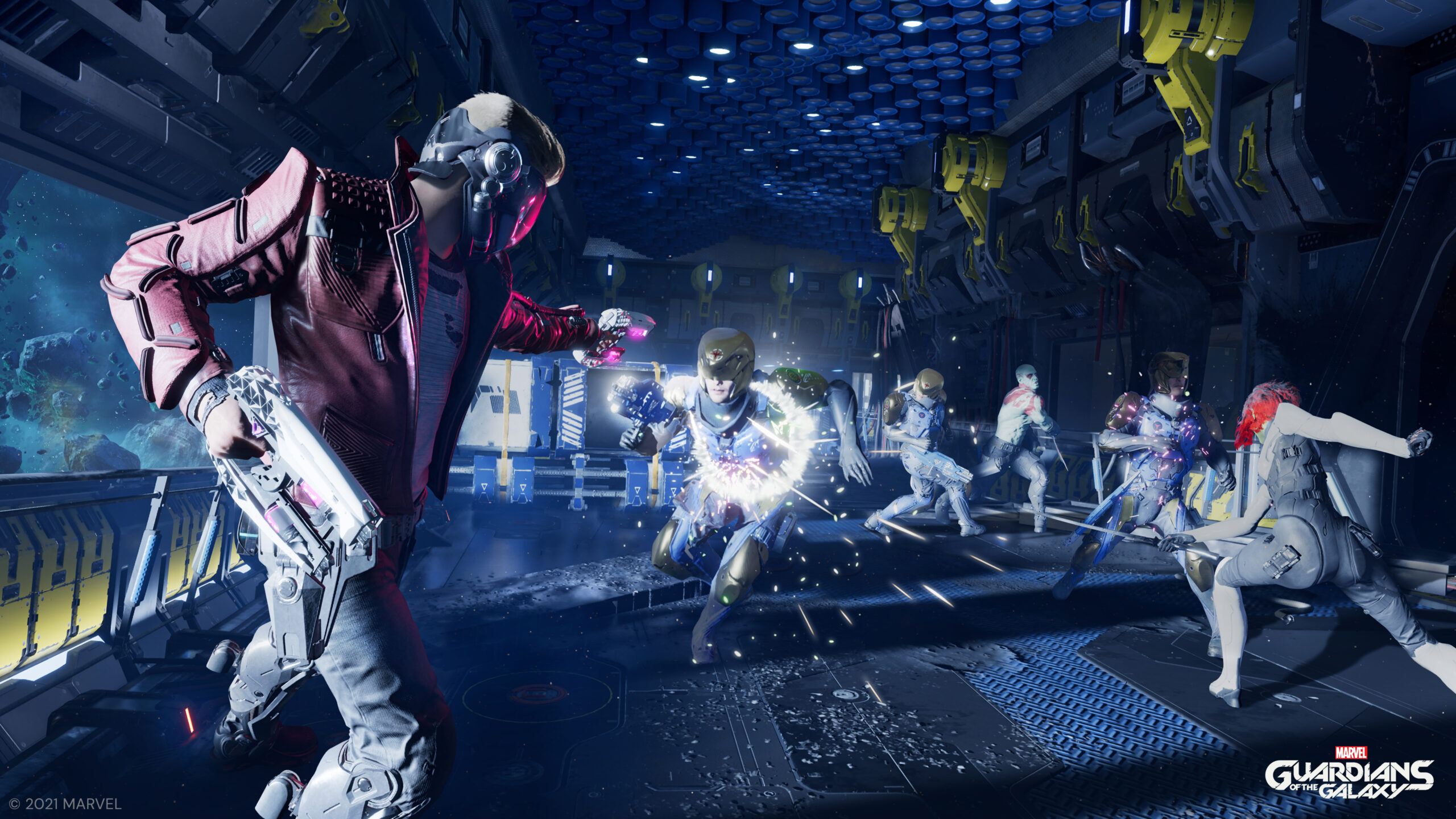 As far as we could see in the preview, the team can either be down on morale and in need of a pep talk or overconfident, which is when Peter Quill should try to keep them focused and steady. If you succeed in correctly assessing the right speech, all of the Guardians of the Galaxy receive a temporary boost to ability cooldowns upon reentering combat, allowing you to literally spam attacks for a little while; otherwise, only Star-Lord gets the boost. It's an interesting mechanics that fits very well with the inherent goofiness of this ragtag but lovable team of superheroes.

When Huddle ends, Peter Quill's companions will make a brief comment on the speech, for example saying that they'll follow him to the end if the speech properly roused them or, conversely, ranting about Quill as 'the worst leader' if he failed to provide any inspiration. Regardless of that, Star-Lord will hit the play button on his walkman, and a new 80's song will accompany the hopefully emboldened team. Music is clearly at the front and center of Marvel's Guardians of the Galaxy, featuring so many great licensed songs from Star-Lord's favorite music era (yes, there is that one song from Rick Astley in case you were wondering) as well as some original ones composed specifically for the game. On the Milano, you get to freely select between all of the tracks via the jukebox, and some of them may elicit funny responses from your fellow companions.

Overall, we had lots of fun playing Marvel's Guardians of the Galaxy, even with the spotty connection hampering the combat experience a bit. By focusing squarely on single player, Eidos Montréal may well have avoided the pitfalls of their sister studio Crystal Dynamics with Marvel's Avengers, which turned out to be lacking in both single player and multiplayer departments. We're also eager to explore the rest of the game, as the B-Roll footage provided by Square Enix even featured a brief space combat section, something the developers hadn't previously mentioned at all.

We won't have to wait too long to find out, anyway, with the release date set for October 26th on PC (where the game supports raytraced reflections and NVIDIA DLSS), PlayStation 4, PlayStation 5, Xbox One, Xbox Series S|X, and even Nintendo Switch via the cloud.

Marvel’s Guardians of the Galaxy Review – What Kind of Name is Avengers, Anyway?