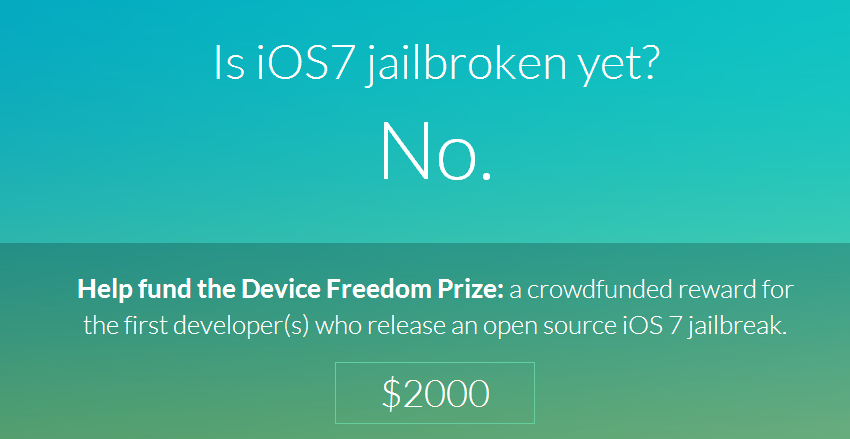 The price will act as a crowdfunded reward for the developer who first releases an open source iOS 7 jailbreak. The Device Freedom Prize project was proposed by Chris Maury and is supported by Cory Doctorow (the co-editor of Boing Boing and DMCA activist), Kyle Wiens (the co-founder and CEO of iFixit), and Biella Coleman (professor and author of Coding Freedom).

The Device Freedom Prize project sites the motivation of this prize:

"We strongly believe that users should have the freedom to control their devices. We wanted an open source jailbreak for iOS 7, giving users the capability to install what they want on their own devices and the ability to audit the code they're using to do so. Jailbreaking is also critical to ensuring that the disabled are able to use their mobile devices as easily as possible. So we started a prize for the first people who can do it."

To compete for this price, developer(s) has to create an open source iOS 7 jailbreak which can work for iPhones (including 4S, 5, 5c, 5s) running iOS 7. It should also support the latest iOS 7 version, iOS 7.0.4. The iOS 7 jailbreak should be untethered and accessible to any Joe. The solution will be publicly released under the license of OSI-approved licenses, and will be made available for FREE.

Visit Is iOS 7 Jailbroken Yet for more information and to donate to the prize.