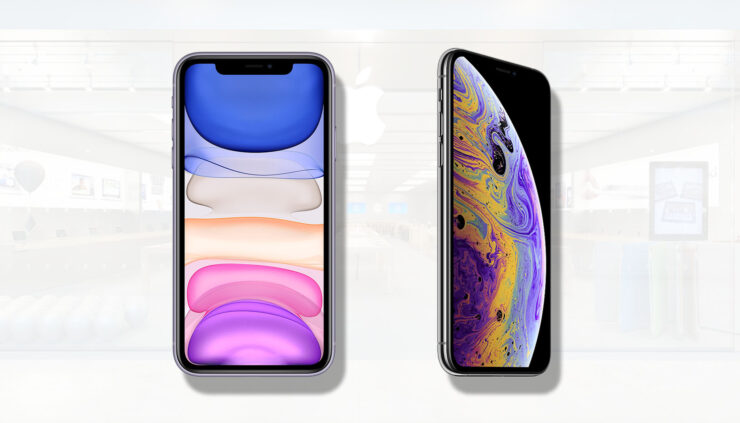 Apple officially started stocking refurbished models of the iPhone XS and iPhone XS Max carrying a much cheaper starting price of $699. That’s a significant $300 drop compared to the price Apple revealed during its 2018 iPhone keynote, but that’s not all the company offers. A $699 iPhone 11 is also part of the lineup, and considering both models have the same price tag, which one makes more sense to buy in 2020? Read on more to find out.

We’ve already detailed in a previous buying guide that opting for a refurbished phone is one of the best decisions you can ever make and it’ll help save you a lot of money. However, when two models are priced the same, you’ll be picky about which one deserves your dough, won’t you?

The iPhone 11 has a bigger 6.1-inch display compared to the iPhone XS’s 5.8-inch screen. Users opting to get the iPhone 11 will experience an improved screen real estate, and thanks to Apple’s advanced display color science, that ‘unsightly’ 1792 x 828 pixels resolution won’t even be noticeable unless you start to nitpick. If you want improved colors and deeper blacks, the iPhone XS’ OLED with its crisp 2436 x 1125 resolution will win you over.

Both displays offer a 625 nits maximum level of brightness, but the iPhone XS’ panel supports HDR and 3D Touch. For the average user, that won’t matter at all, but if you’re the kind of buyer who appreciates a better display, the iPhone XS is a no-brainer. We’d still recommend that you check out our areas of this comparison as you never know when you might change your mind.

The iPhone 11’s A13 Bionic vastly overpowers the A12 Bionic fueling the iPhone XS. According to benchmarks, it is concluded that A13 Bionic delivers incredible performance in a smaller package, making the iPhone 11 an obvious choice when it comes to speed. Both models also feature the same amount of RAM; 4GB of LPDDR4x. Apple also uses the same NVMe storage standard for the iPhone 11 and iPhone XS, making both handsets as snappy as you expect them to be. That being said, it’s obvious that if you prefer performance to be your poison of choice, the iPhone 11 is the clear winner.

Apple included a dual-camera with the iPhone 11, but unlike the iPhone XS, it doesn’t offer a telephoto unit, but an ultrawide angle instead. That shouldn’t be too much of a problem because Apple’s computational image techniques allow you to zoom in 5x via the display on the iPhone 11 and get a clean image with minimal image degradation. With the iPhone XS, there’s only an option and that’s to zoom in, not out, making the iPhone 11 a more versatile weapon of choice.

Also, at the front, the iPhone 11 not only sports a better 12MP camera as opposed to the 7MP shooter on the iPhone XS if we’re comparing megapixel values, but Apple’s cheapest 2019 model can also record 4K at 60FPS. The iPhone 11 also gets faster Face ID, along with a Night Mode that makes the Pixel 4 look downright last-gen.

If I were you, I’d definitely pick the iPhone 11 on this category alone.

A more efficient chipset, a display that resonates fewer pixels and a bigger battery translates into higher screen-on time for the iPhone 11 user. In fact, Apple’s own comparison states that the iPhone 11 will give the user up to 17 hours of video playback, while the iPhone XS can only manage up to 14 hours.

It also goes without saying that the iPhone 11 would likely end up with more charge at the end of the day thanks to its larger 3110mAh cell. According to previous tests, the iPhone 11’s fast-charging limit can reach 22 watts, while the iPhone XS is limited to 15 watts. In all accounts, the iPhone 11 wins by many miles here.

In our ‘paper’ comparison, the iPhone XS’ only redeeming attribute is that OLED screen and that too converts into a drawback, which is more battery drain. In order areas, the iPhone 11 smokes the iPhone XS while carrying the same $699 price. If you’re looking for better value, you can choose the iPhone XR, which retails for $599 brand new. For now, if we were you, we’d avoid a refurbished iPhone XS if you don’t care about its display.

Same price, but different models. Would you pick the iPhone 11 or a refurbished iPhone XS?
Share Tweet Submit