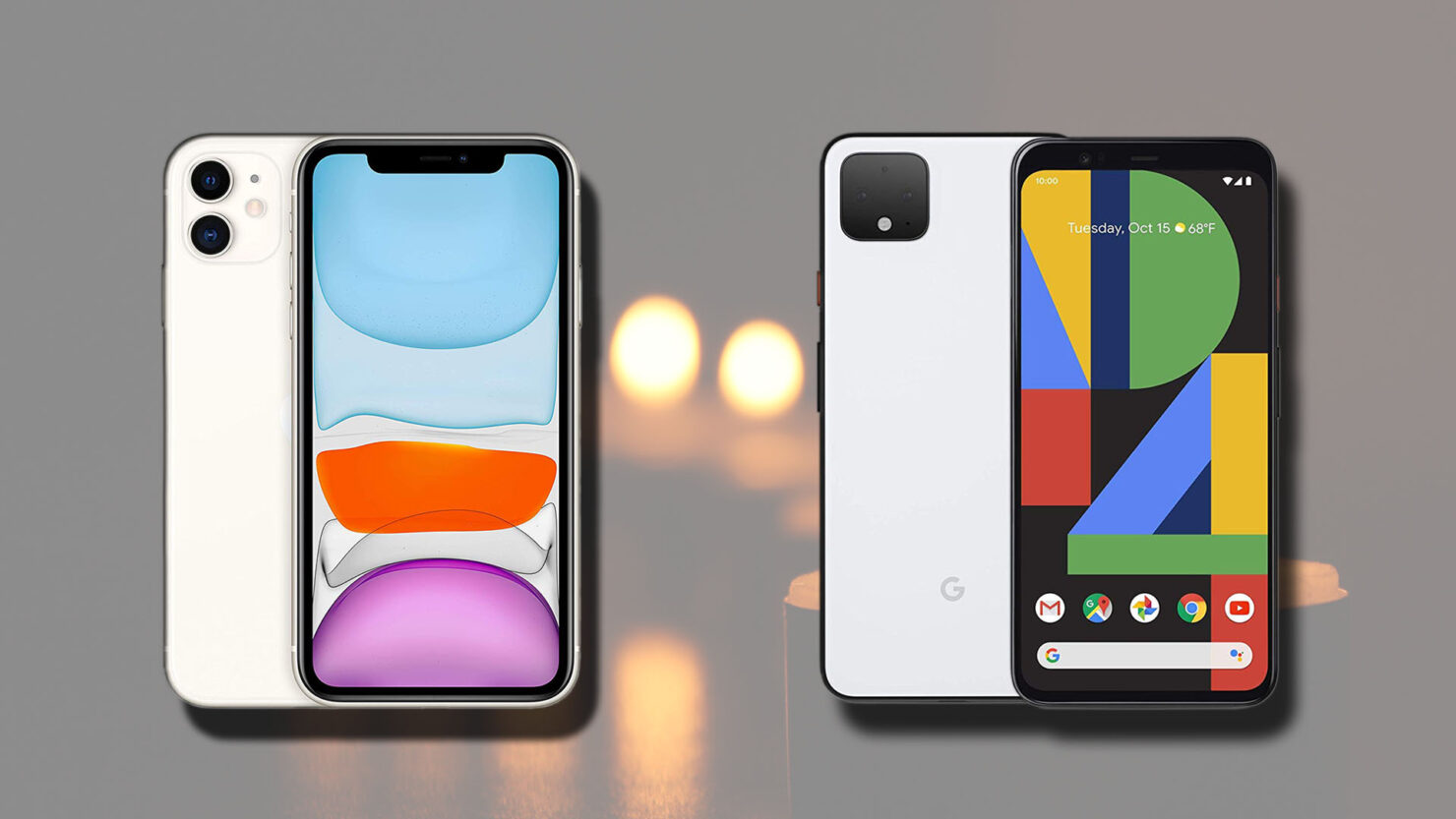 The iPhone 11 has been out for a while and what could have been its closest competitor in the smartphone imaging space is Google’s Pixel 4. Although the latter doesn’t feature a wide-angle camera, it’s still able to capture highly detailed images in various lighting conditions, not to mention Google’s Night Sight feature, which ‘sparkles’ low-light shots like it’s magic. However, Apple also has an ace up its sleeve, and we’ll show our readers just exactly what we’re talking about in the latest iPhone 11 vs Pixel 4 night mode camera comparison.

Despite the Pixel 4 being $100 cheaper than the iPhone 11, Apple’s offering still dukes it out with Google’s latest and greatest smartphone range. According to MacWorld, who carried out night camera comparison shots to see which handset fared better, the results may surprise you. For the longest time, critics said that Apple was playing ‘catch up’ in delivering its own ‘night mode’ and boy, the company sure knows how to make a statement when it comes to computational photography. In case you were wondering about the camera specifications of both handsets, they are given below.

Though MacWorld carried out an early test run of both smartphones, here is a quick rundown on how both models fared. To make things less confusing, all images taken from the Pixel 4 are on the left, while the ones taken from the iPhone 11 are on the right. In one image below, you can see that the iPhone 11 retains a lot more color accuracy, while the Pixel 4’s Night Sight feels like a downgrade. It could be because of the giant street light on the left, but let us show you a couple more images to tell you what we’re talking about. 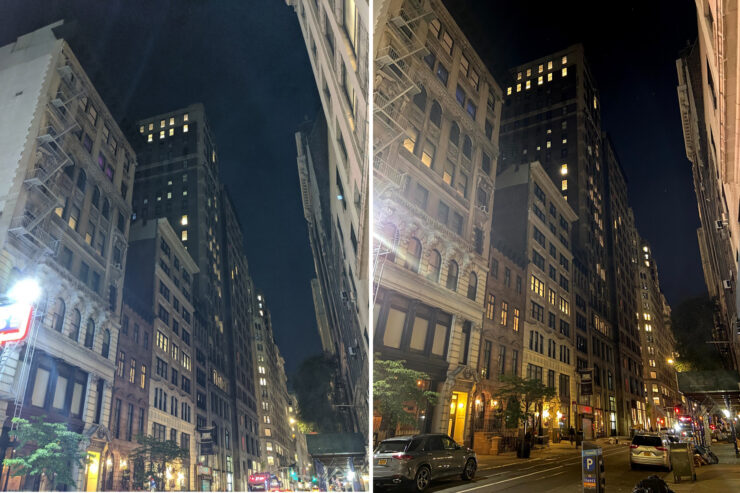 In a second image, we are disappointed to see that there was no competition and the iPhone 11 was the clear winner. Firstly, the images taken by the Pixel 4 are much darker than the ones snapped by the iPhone 11, which also decreases the overall quality. This is actually surprising because, in an earlier camera comparison that saw the iPhone 11 Pro take on the Pixel 4, Google’s flagship took a comprehensive lead in retaining both accuracy and detail. Then again, they weren’t low-light shots such as these, meaning you’re able to see things from a different perspective. 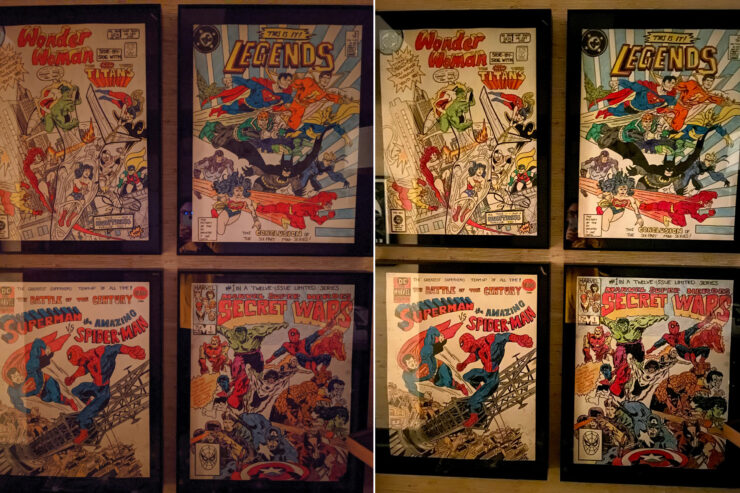 In the third image, even though we feel the iPhone 11 dropped color detail in capturing the taxi compared to the results the Pixel 4’s camera processed, the background retains more data on the iPhone 11’s sensors. The church appears slightly brighter when captured with the iPhone 11, with the individual trees displaying more details than what the Pixel 4 churned out. 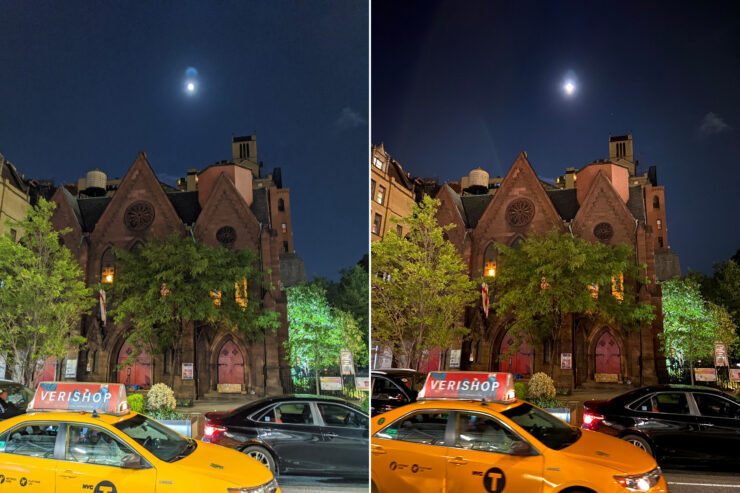 I think it would be too easy to give up on the Pixel 4’s camera this early. Even MacWorld stated that this is just an initial comparison of the two smartphones and an in-depth review would be followed in the near future. The Pixel 4 still took some fantastic shots in other images, and you can check all those out via MacWorld’s detailed comparison. It’s just that there were a lot of areas in some images where the Pixel 4 lost out on a significant amount of detail, and we don’t know if Google will address this problem with a software update for its Night Sight feature down the road.

Another feature Google left out from both the Pixel 4 and Pixel 4 XL is video recording at 4K 60FPS. The company defended this, by stating that a lot of people record footage in 1080p, so instead of opting for a 4K 60FPS option, Google limited both smartphones to 4K 30FPS while focusing on improving image quality as well as helping users conserve storage space. While that is Google’s stance on this, a lot of customers may not appreciate what the company did.

Coming back to the iPhone 11 vs Pixel 4 night mode camera comparison, this bout is far from over, and we’d like to know your thoughts on the latest differences you saw in these images.

iPhone 11 vs Pixel 4 Night Mode Camera Comparison - Which Smartphone Came out on Top?