Despite the fact that the iPhone 11 launched in September of 2019, it quickly rose to the top of the ranks, and according to Counterpoint Research, it ended up becoming the second-best-selling smartphone for the entire year.

A previous report stated that the iPhone 11 was only outdone by the iPhone XR, which launched in 2018 and shipped approximately 46.3 million units for the 12-month period. In Counterpoint Research’s latest report, there’s no change as the iPhone XR was on the top of charts, attaining a 3 percent overall global smartphone market share, while the iPhone 11 accumulated a 2.1 percent market share. According to the report, Apple’s iPhone 7, iPhone 8, iPhone XS Max, and iPhone 11 Pro Max were featured one way or another for having some global market share in 2019.

This makes Apple one heck of a dominating smartphone brand in lots of regions, and it’s surprising to see this because no Android flagship was a part of the conversation when a global market share was being talked about. Instead, we only got to see mid-rangers, with three models belonging to Samsung’s Galaxy A line. This goes to show not only Apple’s impressive hold in various markets but also the fact how a reduced starting price can make a huge impact on sales. 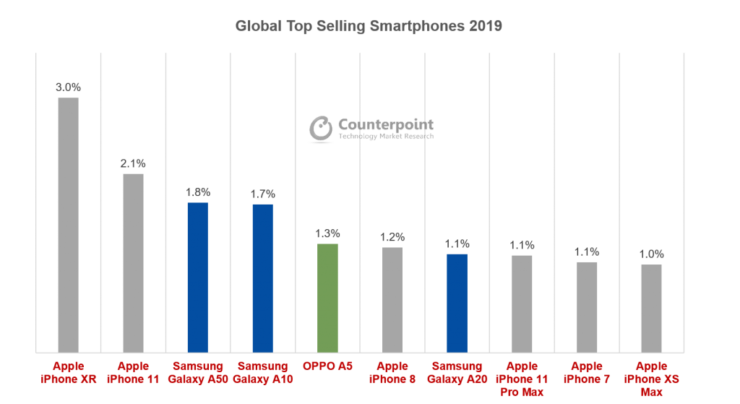 To recap, the iPhone 11 starts at $699, is $50 cheaper than the iPhone XR and is better in every way. Looking at what you’re getting in return, there’s no way this model wasn’t going to be a smashing hit. Additionally, one other model that’s expected to sell in droves this year is the iPhone SE 2, or iPhone 9, whatever fits your liking. Rumored to start from $399, though it’s expected to sport the same previous-generation design as the iPhone 8, it could be powered by the A13 Bionic.

This is the same SoC fueling the iPhone 11 lineup, and an affordable price tag coupled with powerful hardware can mean the iPhone SE 2 could find its name on a future report. Do you agree? Let us know your thoughts down in the comments. 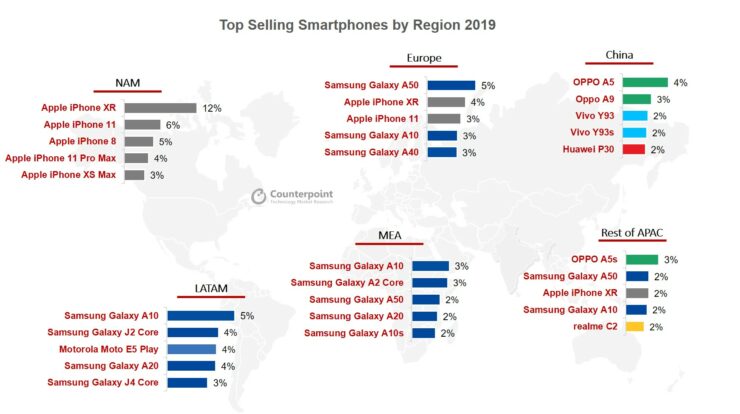