‘iPhone 9’ Name Spotted on Pre-sale Poster Outside a Korean Mobile Store – Is This the iPhone SE 2’s Official Name?

If you’re torn between what Apple is going to call its upcoming low-cost iPhone, a promotional pre-sale poster spotted outside of a Korean mobile store might give you some ideas. Bear in mind that the name iPhone 9 has been mentioned earlier, and it would make a lot of sense given that it’s expected to feature upgraded specs but sport an iPhone 8 chassis. Others still believe that Apple will name it the iPhone SE 2 since it will be the direct successor to the iPhone SE. In any case, take a look at this promotional image and be the judge yourself.

Promotional Pre-sale Poster Also Gives You Free AirPods With an iPhone 9 Purchase; It’s a Deal Unheard of Before

Korea Telecom is South Korea’s second largest wireless service provider, so it’s difficult to believe that these images are fake, unless of course they were manipulated using editing software. Apple doesn’t follow the practice of giving freebies with an iPhone purchase, so it’s likely up to carriers to make customers happy in this fashion. Bear in mind that the $699-priced iPhone 11 doesn’t even ship with a fast charger in many markets, and here we have a free pair of AirPods being given out to early iPhone 9 adopters. 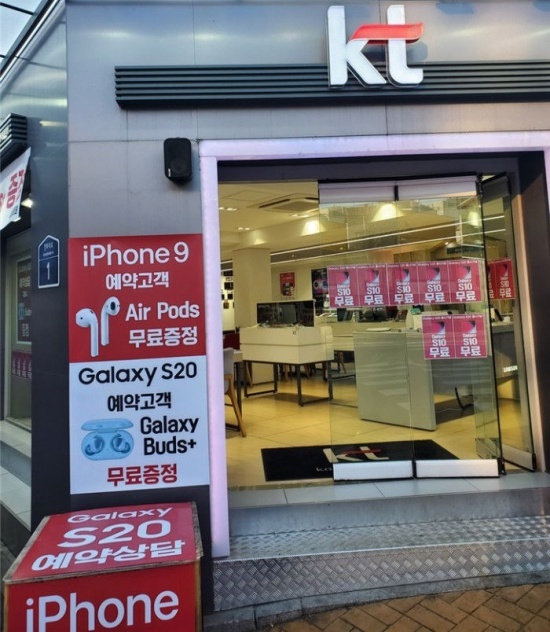 If the offer is legit, a lot of customers might forego a Galaxy S20 purchase simply because an iPhone 9 purchase will give you more value. After all, it’s reported to come with an A13 Bionic and a $399 starting price, making it more affordable and powerful the Snapdragon 865-fueled Galaxy S20. A previous report from Ming-Chi Kuo stated that Apple expects to sell 30 million units of the iPhone 9, or iPhone SE 2, whichever suits your tongue, making it quite a popular handset in various markets.

So what do you think will be the official name of Apple’s low-cost model? The iPhone 9 or the iPhone SE 2? Let us know down in the comments.