iOS 7 Jailbreak On iPod Touch Has Been Achieved

Its no secret that iOS 6 was tough to jailbreak, and its successor was believed to shut the door completely on jailbreaking, but it looks like that is not going to happen. We've discussed iOS 7 jailbreak possibilities in great detail here, and apparently a jailbreak for iPod touch running iOS 7 has already been achieved. Well known iOS hacker and jailbreak tweak developer Ryan Petrich posted a screenshot on Twitter today which shows Activator running on Apple's latest firmware. Activator can not be installed on an iOS device unless it is jailbroken first. 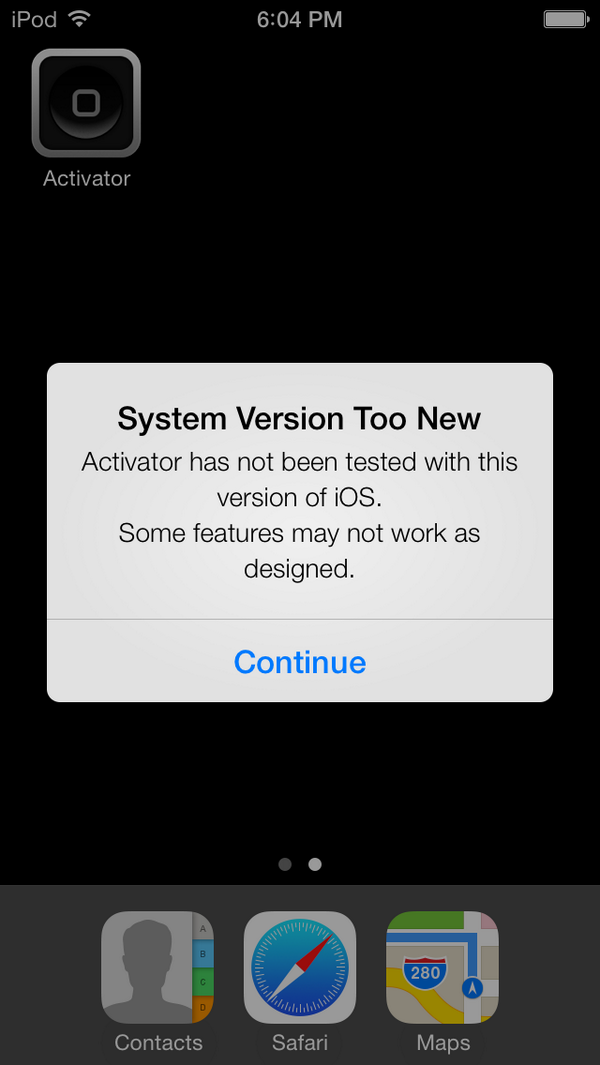 Just recently we reported that iOS 7 untethered jailbreak was in trouble because Pod2g, an iconic iOS jailbreak developer, was not interested in the new firmware. He made these comments after testing iOS 7 beta 1, which was seeded on June 10th. Pod2g went so far as to call iOS 7 design "awful" adding that he thought the new firmware was slow. He even said that he might considering switching to an Android device. There has been much discussion about the design of iOS 7, some are not in favor of Apple opting a flat user interface, some don't like the new app icons. It is believed that the design may be significantly changed, however the flat aesthetic of the overall system is here to stay. For iOS 7 jailbreak developing efforts, the departure of Pod2g is definitely a set back.

As previously mentioned, Ryan Petrich tweeted the image posted up. Apparently Activator is not working as designed on an iPod touch running jailbroken iOS 7, I'm guessing iOS 7 beta 2 which was seeded to developers last week. It throws a "System Version Too New" error. This is believable, jailbreak tweets have yet to be developed for iOS 7. Ryan hasn't mentioned if this iOS 7 jailbreak is a tethered or an untethered one. The device itself is a fifth generation iPod touch, its obvious because no other iPod touch model supports Apple's latest platform update.

As far as we know, efforts to achieve an iOS 7 jailbreak that can be released to the public are well underway. Legendary iOS hacker @p0sixninja had already said earlier this year that he was working for an iOS 7 jailbreak, even before this update had officially been announced. No public jailbreak release will be made before Apple releases iOS 7 for the public, that is expected to happen this September. For all we know, it could take a couple of months more after the public release for a workable tethered or untethered iOS 7 jailbreak to release. We'll keep you updated on the jailbreak development process, don't forget to check back.