I'm afraid that I have some pretty bad news to report. It seems like jailbreak guru @pod2g isn't interested in iOS 7 untethered jailbreak. Apple unveiled its latest iOS platform update about a week back at WWDC 2013. The company calls it the biggest update that they have ever developed for their mobile platform, many do agree, but some are firmly of the view that Apple has strayed away from its own creativity. Apparently Pod2g shares the same view, who says that iOS 7 is nothing revolutionary and that its just "kid painting." What really puts the possibility of an iOS 7 untethered jailbreak under threat is that he has indicated that he just might be switching to an Android device soon. 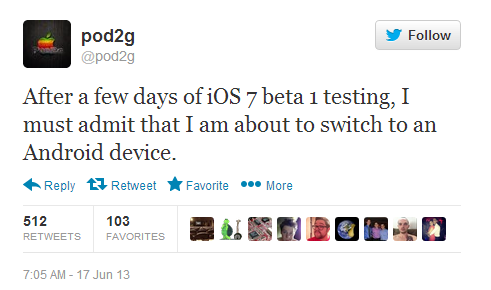 Pod2g made this rant against Apple on his twitter account. He says that he tested iOS 7 beta 1 and has not been impressed with it, in fact that has made him want to switch to an Android device. He further adds that iOS 7 design is "awful" and that its slow. Pod2g accepts the fact that this is just the first beta of iOS 7, but despite that according to him that does not justify all of the UI bugs and crashes that it bears. He also heavily criticizes the battery life, calling it the "worst ever." At the end Pod2g says that he is very disappointed by the features he has seen in iOS 7 and firmly believes that there's nothing revolutionary about this update, "no big news, just kid painting." So how does that fare for an iOS 7 untethered jailbreak? Well it certainly limits our options.

As I mentioned in my detailed explanation of iOS 7 jailbreak scenarios, it won't exactly be easy to crack this software. Apple has made it increasingly hard since iOS 5 to jailbreak its firmware. The fact that there's no hardware level exploit for any of the current devices also presents a major hurdle. The only way an iOS 7 untethered jailbreak is possible right now is through a software based exploit, and not having Pod2g on the team will definitely be a huge setback for the entire jailbreak community.

Nevertheless, we heard for @p0sixninja late last year who said that he was already working on an iOS 7 untethered jailbreak. Obviously not having Pod2g in the fray would slow down things a bit, but there's still a very dedicated team that is committed to cracking Apple's firmware. Hopefully they'll be able to find a way to achieve an iOS 7 untethered jailbreak. Till that happens, we'll definitely keep you updated on the developments related to iOS 7 jailbreak.