Only yesterday Apple started shipping iPad mini out to the public. Already it has been confirmed that it is indeed possible to jailbreak iPad mini on iOS 6. The newer iOS devices, those boasting A5 processors and up, have proven to be harder to jailbreak as compared to their predecessors. This is primarily due to the fact that the new processors are not susceptible to the Limera1n bootrom exploit, and no new bootrom exploit has been found in aforementioned processors.

MuscleNerd of the infamous iPhone Dev Team posted an image on his Twitter today, showing us that it is possible to jailbreak iPad mini. As for the caveat we talked about earlier, at this point in time this iPad mini jailbreak is limited to developers only. 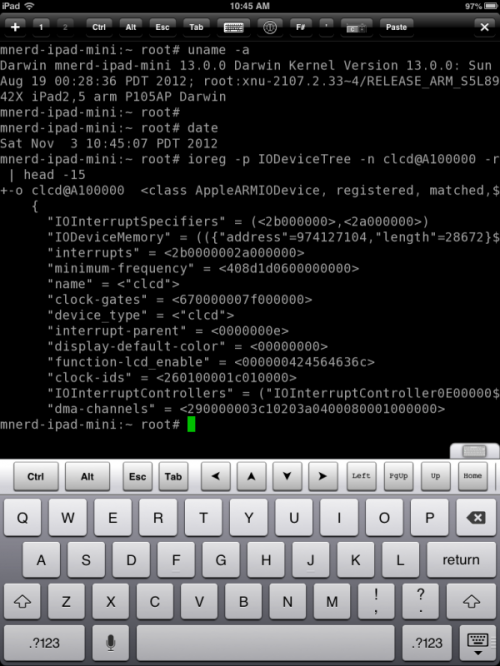 While it is indeed possible to jailbreak iPad mini, this particular development has been termed as a failbreak. This term was coined by Grant Paul a.k.a chpwn who was able to jailbreak iPhone 5 merely a day after its release. However that jailbreak came with a caveat. That particular iPhone 5 jailbreak could not be released to the jailbreak-hungry public primarily because it required an Apple Developer Account to function.

This is exactly the case with iPad mini. Regardless of the fact that MuscleNerd shows us it is possible to jailbreak iPad mini on iOS 6, it can not be released to the public due to the fact that it too requires an Apple Developer Account to function. While this update serves as a confirmation that jailbreakers are hard at work, an immediate release of an iPad mini jailbreak can not be spotted on the horizon. For now it is just a failbreak. At the moment it is possible to jailbreak iOS 6.0.1 only on iPhone 4, iPhone 3GS and iPod touch 4G.

Hopefully it shouldn't more than a couple of months before a working solution is readied that allows us to jailbreak iPad mini on iOS 6. Until then we will have to wait and watch the jailbreak gurus give it their best. That said, while we're on the subject of Apple's latest tablet, have you entered our iPad mini giveaway yet? You definitely should.