Intel is planning to announce major price cuts on its CPU lineup as we head into the second half of 2020, reports DigiTimes. The report states that the price cuts would be made by Intel to retain its market dominance against AMD's upcoming onslaught of Zen 3 based CPUs.

As mentioned in the report, this information comes directly from PC makers or OEMs while Asian PC retailers and suppliers have also hinted at something similar. However, this doesn't mean that the entire portfolio of CPUs may get a price cut or whether Intel would adjust the prices silently or make a public announcement about it.

The thing is, the report isn't very clear and doesn't mention if the price cuts would be for all Intel CPU segments or a particular segment. What we do know is that Intel has already price cut its PC HEDT line of CPUs to remain relevant in the enthusiast market space. They also announced price cuts for their Xeon W family, 9th Gen mainstream desktop family and more recently, their 2nd Gen Xeon Scalable Family processors by a significant amount.

But here's the thing, the only thing Intel is doing right now to remain competitive is offering price cuts and nothing more. The entirety of their upcoming 10th Generation lineup is just adding more of the same cores and boosting the clock speeds while resulting in significantly higher power draw and even higher temperatures. The 10th Generation Comet Lake-S family is expected to launch in the coming months and this is what I am expecting would get the price cuts.

An alleged slide which shows that Intel would spend $3 billion to stay competitive against AMD's CPU efforts. (Image Credits: AdoredTV)

Currently, the Comet Lake-S desktop CPUs would be replacing their predecessors at the same price point if not lower but with the amount of financial horsepower backing Intel up, I think they could definitely afford not one but two price cuts to remain competitive in the desktop PC segment. The CPU lineup would be based around the new 400-series motherboards, including the flagship Z490 chipset which would support unlocked 'K' series SKUs on the LGA 1200 socket. There are reports that Intel's Comet Lake-S platform was expected to feature PCIe Gen 4.0 support (via chipset) but due to several problems, the support had to be removed.

The second possibility is that not only the desktop lineup gets reduced prices but also the next-gen 14nm Cooper Lake-SP and 10nm Ice Lake-SP chips which are expected to launch in the 2H of 2020. It would be a missed opportunity for Intel to not offer their next-generation Scalable Xeon family at much more affordable prices before AMD unveils their EPYC Milan (3rd Gen EPYC) lineup. While Intel would be pushing the core counts of their processors and utilizing new architecture, AMD is also expected to do the same with their EPYC chips but on a more robust platform that offers extremely great value for HPC and Datacenters. This is why AMD is highly confident that they will hit double-digit server CPU market share by next quarter with their goal to surpass the historical levels in both server and desktop segments.

So we’re building out that portfolio very, very nicely. And we believe the features that we are building across our multi-generational roadmap are really driving total cost of ownership which is one of the key imperatives to the customer base in the data center.

So, I would say, let us get to double-digit share first and then the historical highs over time may become a little more realistic in terms of investor expectations. And then, the conversation is how do you go beyond that? You have seen this Zen underpinning of our architecture for the roadmap. We're now on Zen 2 and Zen 3. And Zen 4 will come in time and that helps on that journey.

So it's a multi-generational effort our customers have now bought in. We've enhanced our reputation in the data center, which has been important.

Intel had to cut the prices of their 10th Generation HEDT processors in half, just to remain relevant in the enthusiast space while AMD conquered the same space with their disruptive 3rd Gen Ryzen Threadripper CPUs, featuring up to 64 cores, 128 threads.

I guess this is all good for Intel and consumers if they are indeed planning price cuts but at the same time, they shouldn't put all faith in just price cuts making their lineup more competitive. AMD will be introducing their Zen 3 core architecture based Ryzen and EPYC processors in the second half of 2020, bringing forth a new architecture, significant IPC gains, faster clock speeds and higher core counts along with a list of new but untold features and that is going to put even more pressure on Intel's CPU lineup. So all these price cuts are going to do are help Intel to retain its current CPU market position which would be really hard for Intel to pull off, especially with what we have heard about Zen 3's performance level. And that is without us even considering Intel's supply woes which are expected to persist through 2020, which might explain why price cuts are needed to offset the lower supply. 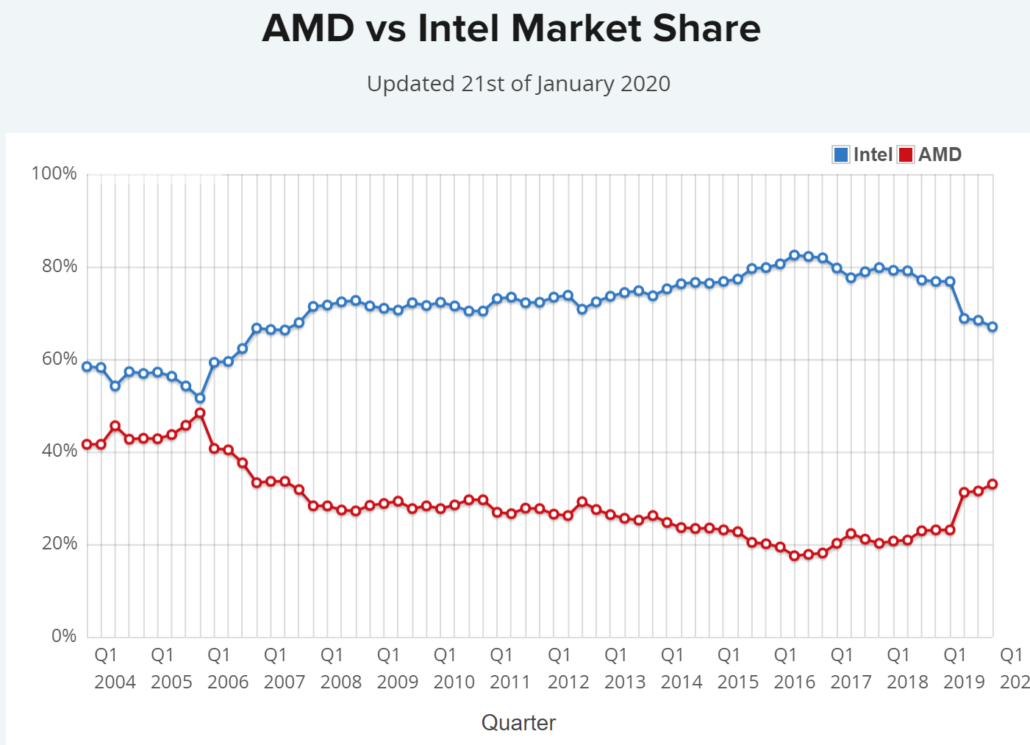 AMD's Zen 2 based processors have already demolished Intel in major DIY markets and we can expect Zen 3 to do the same until Intel has a processor family that brings major performance and efficiency uplift. We know about rumors of some backporting shenanigans happening with Intel's Rocket Lake-S desktop processors. Intel already confirmed backporting their new architectures to older nodes is possible in the latest process roadmap so we can expect a surprise element from Intel over there but we have to wait for details from Intel themselves to confirm these.