AMD will soon be announcing its Zen 3 core architecture for Ryzen 4000 and EPYC Milan CPUs. The Zen 3 architecture is expected to bring a huge performance update and reports have emerged that show that Zen 3 would be bringing a significant, double-digit IPC uplift over Zen 2 architecture that is featured 3rd Gen Ryzen and EPYC Rome CPUs.

The key features of the Zen 3 cores would be the architecture itself which would be receiving a big upgrade over Zen 2. According to AMD themselves, the Zen 3 design brings an entirely brand new CPU architecture, Significant IPC Gains and Faster clocks than ever seen before. According to Red Gaming Tech, their sources have pointed out that Zen 3 would bring an evolutionary update to the Zen roadmap, offering another big jump in IPC over Zen 2.

It is pointed out that in mixed operations that leverage both integer and floating-point units of the Zen architecture, Zen 3 could deliver a 17% IPC gain on average. It is also stated that the integer ops are getting a 10-12% increase on average while the floating-point operations could feature up to a 50% increase in performance. Integer operations are what most general consumer apps use but in floating-point heavy applications, Zen 3 has the potential to be a big game-changer for the industry and especially the server market (HPC/Datacenters).

We also got to see a major change to the cache design in an EPYC presentation, which showed that Zen 3 would be offering a unified cache design which should essentially double the cache that each Zen 3 core could have access compared to Zen 2. In Zen 2, each CCD is comprised of two CCX, with each CCX having a separate 16 MB L3 cache, even though the CCD contains a 32 MB L3 cache. With Zen 3, the entire 32 MB+ L3 Cache will be available to both CCX's and do note that Zen 3 could also carry more than just 32 MB of cache as pointed out in the slide.

There's also a word on clock speeds, which is expected to get up to 200-300 MHz boost which should bring Zen 3 based Ryzen processors close to the 9th Generation Intel Core offerings. That, along with the massive IPC increase and general changes to the architecture, would result in much faster performance than existing Ryzen 3000 processors which already made a huge jump over Ryzen 2000 and Ryzen 1000 processors while being an evolutionary product rather than revolutionary, as AMD unveiled very recently.

So let's say a Ryzen 9 3950X currently has a base frequency of 3.5 GHz and a boost frequency of 4.7 GHz, its successor can potentially feature a base frequency around 4 GHz and a boost frequency around 5 GHz, which would be pretty good, but at the end of the day it's not about the max clock speeds that are advertised by AMD themselves, but the max clock speeds that the CPU can retain for longer duration. The Ryzen 9 3950X can retain clocks of around 4.4-4.5 GHz and that too with a series of updates (AGESA BIOS) which are still being worked upon.

The real test for Ryzen 4000 line of processors would be their ability to retain the advertised clock speeds which have been a slight cause of concern for many users who have bought Ryzen 3000 CPUs, but still, the performance you get out of these chips is stellar which shows that clock speeds aren't the only metric to go by these days when comparing CPUs and their underlying architecture. The AMD Ryzen 4000 CPUs and X670 platform is expected to arrive by the end of 2020 since AMD just recently finished their Ryzen 3000 line. I think that August-October 2020 to be a possible time-frame for the new Ryzen series launch, but we have to wait and see.

There's even a new roadmap shared by Red Gaming Tech which seems to point out to AMD's CPU release plans up till 2022. The roadmap is based on rough estimates but there's some good info to be taken into consideration here. First up, we have the EPYC Milan processors which would arrive sometime around mid of 2020 and offer pin-compatibility with SP3 socket, PCIe 4.0 support, SKUs with up to 64 cores (more possible) with TDPs ranging from 120 to 225W and a 9 title MCM design out of which 8 tiles are Zen 3 CCD's and a single die is dedicated to the I/O, just like EPYC Rome. 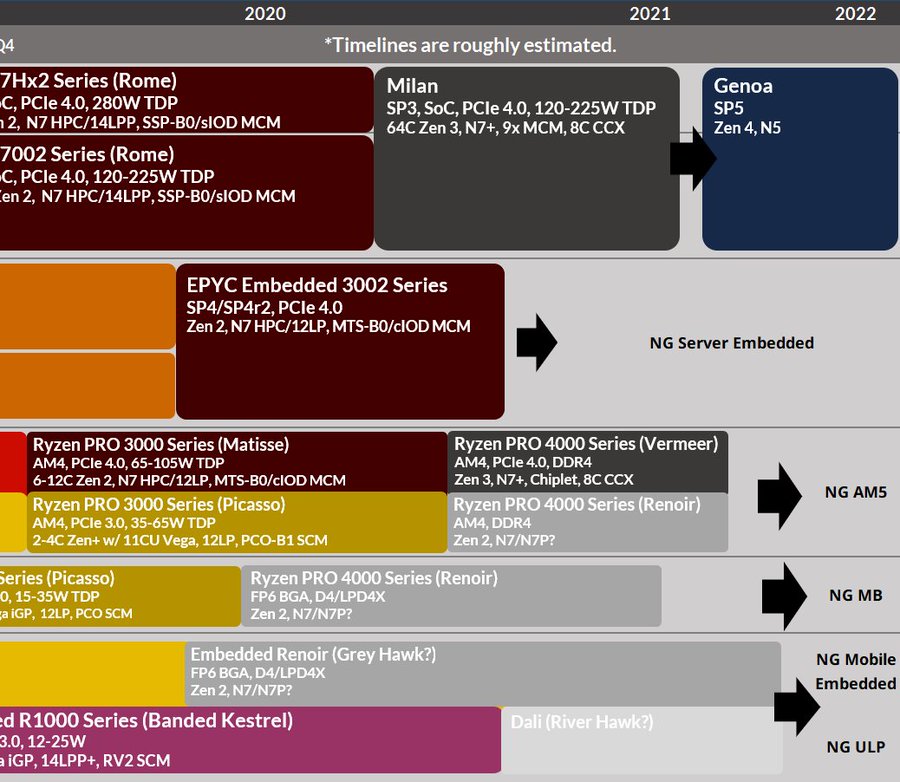 Next up, there's Ryzen 4000 and Ryzen Pro 4000 'Vermeer' series, which will feature support on the AM4 socket and feature PCIe 4.0 / DDR4 memory compatibility. The Zen 3 based Ryzen 4000 CPUs will offer 8 cores per CCX and are said to retain the 2 CCD and 1 I/O die configuration as the Ryzen 3000 processors, however, a statement from AMD's CTO, Mark Papermaster, in an interview with Tomshardware, points out that even next-gen mainstream chips could be getting increased core counts.

Mark's reply was solely for the mainstream lineup where has was asked if 32 cores would make any sense on the Ryzen platform. Following is the complete reply:

"I don’t see in the mainstream space any imminent barrier, and here's why: It's just a catch-up time for software to leverage the multi-core approach," Papermaster said. "But we're over that hurdle, now more and more applications can take advantage of multi-core and multi-threading."

"In the near term, I don’t see a saturation point for cores. You have to be very thoughtful when you add cores because you don’t want to add it before the application can take advantage of it. As long as you keep that balance, I think we'll continue to see that trend."

Last week, AMD's SVP, Forrest Norrod, revealed how Zen 3 is going to bring an entirely new chip architecture along with other key enhancements. Based on the 7nm+ process node, AMD aims to deliver some major IPC improvements and key architectural changes with Zen 3 cores. AMD will also follow the Intel Tick-Tock cadence with Zen 2 being the Tick since it offers a new process node and an evolution to the original Zen design rather than a complete architectural change while the Zen 3 core will be AMD's Tock, offering a similar but enhanced process node (7nm+) alongside a brand new architecture.

Even if the 7nm+ process node isn't a big upgrade like 14nm to 7nm, there are still some uplifts to efficiency. TSMC's 7nm+ process node which is made using EUV technology delivers 10% better efficiency than its 7nm process while offering 20% more transistor density than the 7nm node. You can read more here about all the architectural changes that AMD is expected to be bringing with their Zen 3 core architecture.

Given how well AMD Ryzen 3000 CPUs compete against Intel's 9th Generation lineup, in just one more generation, AMD would definitely be the IPC leader in the mainstream and HEDT desktop market, considering Intel isn't bringing 10nm anytime soon to their desktop products. Even Intel's Comet Lake and Rocket Lake processors are expected to retain 14nm architectures, with the latter expected to be a back-port of Willow Cove architecture on 14nm. If you thought Ryzen 3000 was great, then buckle up your seats because AMD is just getting started for an even bigger 2020 CPU product launch.

Expect more information on Zen 3 architecture at CES 2020, which is just a few weeks away now.

What do you think the final IPC gain of Zen 3 would be over Zen 2?
Share Tweet Submit