The Intel Real World Performance benchmarks have been marked with controversy ever since the blue team started using them. We have seen examples of Intel using different configurations when testing their own and competing chips, giving their own lineup an unfair advantage. We have also seen misleading slides where AMD CPUs were shown as one tier below the Intel CPUs based on its own performance metrics which consist of benchmarks purely optimized for their own processors or single-core workloads. 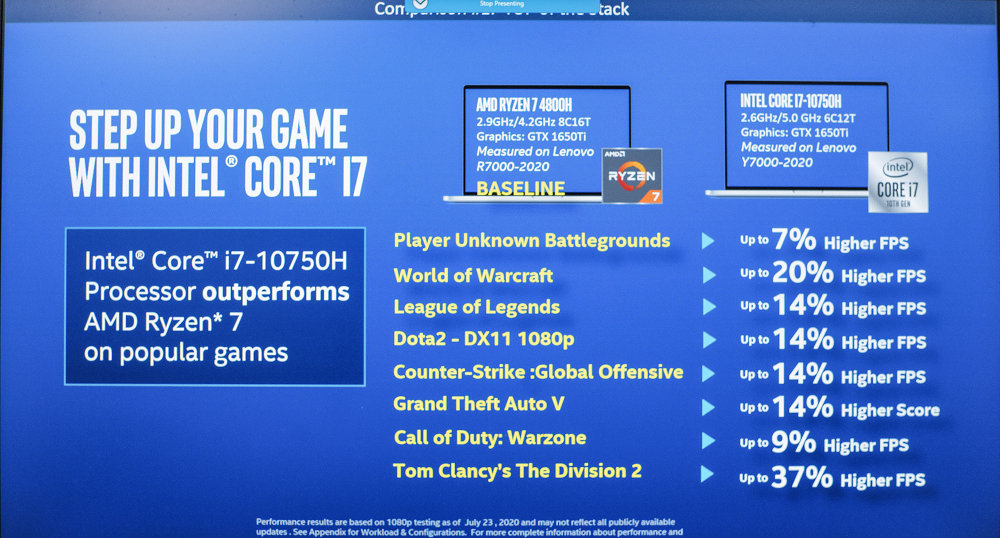 One thing that should be mentioned here is that when comparing TDPs, Intel always sets its figures at the base clock. The 45W TDP for the Core i7-10750H is derived at 2.60 GHz while the PL2 rating is derived at the highest boost frequency. For 5.00 GHz, the Core i7-10750H has a PL2 rating of 80W which is almost twice its PL1 TDP. The AMD Ryzen 7 4800H maintains its frequencies within the 45 Watt TDP headroom. 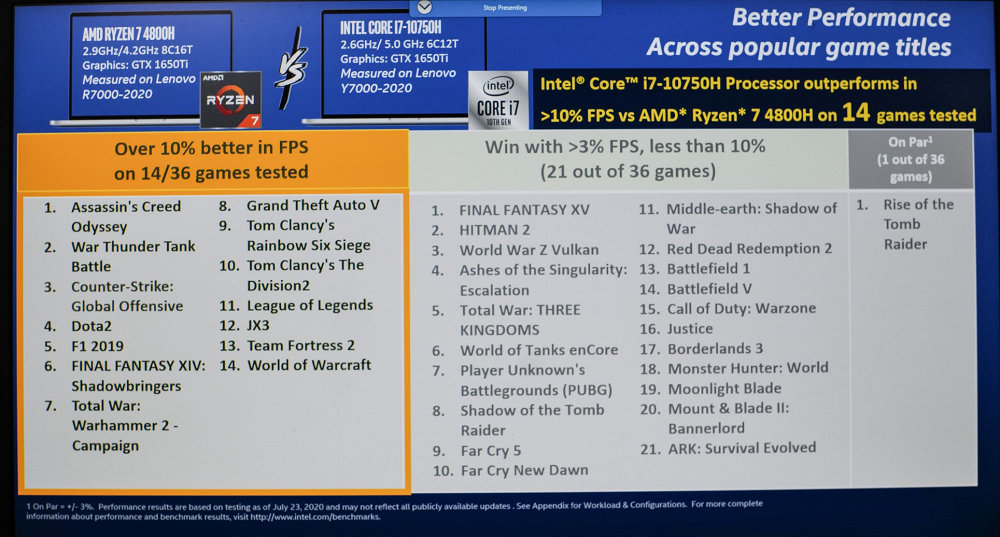 Following are the specifics of the configurations that were tested:

A total of 36 games were tested at their default settings. In 14 games, the Intel Core i7-10750H got more than 10% higher FPS on average. Tom Clancy's Division 2 saw the biggest jump in FPS with a 37% gain in performance. Intel claims that its CPU scored better gaming performance than AMD's Ryzen 4000 Renoir APUs in several popular eSports titles such as PUBG, World of Warcraft, Leauge of Legends, Dota 2, CSGO, GTA V and Call of Duty Warzone.

In 21 gaming titles, the Intel CPU got more than 3% better performance on average than the AMD Renoir APU while the performance was on par with the Renoir APU in a single game (Rise of The Tomb Raider). Following is the description of all the gaming titles that were tested:

Games with performance differences of more than 10% are as follows:

Games with performance differences of more than 3% but less than 10% are as follows:

Games with the same performance are as follows: 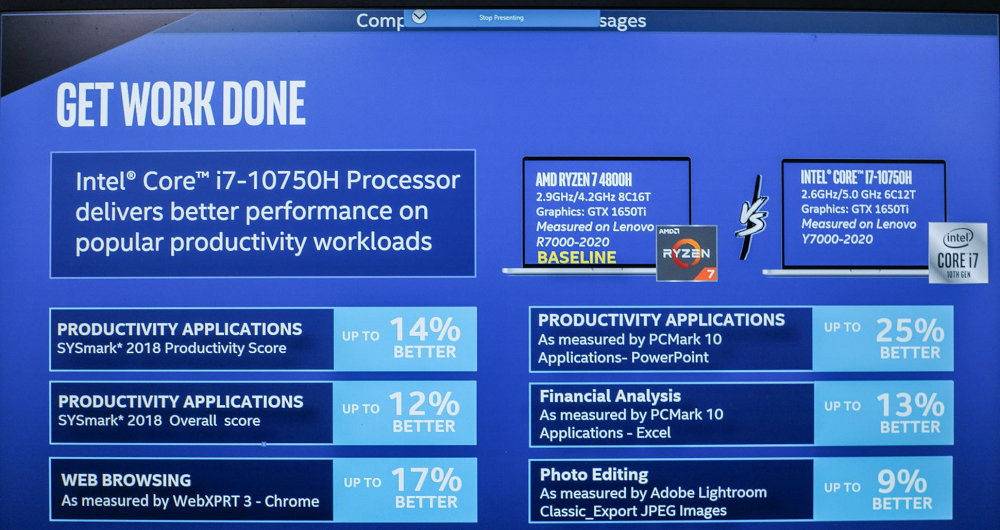 With the gaming benchmarks out of the way, Intel also focuses on the general performance of its CPUs versus AMD's offerings. The same two CPUs were tested and Intel claims up to 25% better performance in productivity workloads. Intel uses Powerpoint, Excel, Chrome, and a range of other popular benchmarks to test the performance metrics but at the same time, leaves out the multi-threading intensive benchmarks out of its testing suite which is a segment where AMD dominates.

It's also surprising that Intel is still relying on benchmarks to showcase the potential of its 10th Gen CPUs whereas its CEO stated that the industry should stop focusing on benchmarks. A few months back, an internal Intel memo leaked out revealing that they have been assessing AMD's progress with their Ryzen, Ryzen Threadripper, and EPYC processors, going as far as to call them a huge risk for their own CPU lineups in the coming years. Meanwhile, AMD is clawing away CPU share from Intel in all segments include servers, desktops, and notebook PCs.