Intel's marketing division in the Asian Pacific market stated during an event how their Core i5 and Core i3 processors are much better in performance compared to AMD's 8 and 6 core Ryzen 3000 series CPUs.

Intel isn't in the very best market position as of right now, their processors have been crushed in every segment and are losing significant market share to the point where even Intel's CEO doesn't want to focus on keeping a higher market share going forward. There's a lot that went wrong with Intel, from 14nm production issues to security vulnerabilities to completely being crushed in perf per dollar against AMD's Ryzen lineup and yet not trying to be competitive at all. Even the recent 10th Gen X-series launch had just 6 hours of fame after which it was entirely eclipsed by the AMD Ryzen Threadripper 3rd Gen launch, so much so that Intel's ex-engineer, Francois Piednoel went ahead to call it the dumbest launch in the history of Intel.

Miss me yet @intel ? https://t.co/AL2W9I57r2
I used to be a nightmare for intel PR because I was making sure they don’t do that kind of crap ... They got the crown ? today, the dumbest launch of the history of Intel, congrats ! ????

As we know from previous reports, Intel's 9th Gen Core lineup isn't doing well in major markets so Intel's marketing division recently held an event in China, showcasing the advantages of their Core i5 and Core i3 processors and comparing them against AMD's Ryzen 3000 processors. Highlighting the one and the most controversial slide displayed during the event, it is stated that the Intel Core i3-9350KF is better than the entire Ryzen 5 3000 series lineup in gaming, office workloads, & even content creation applications. 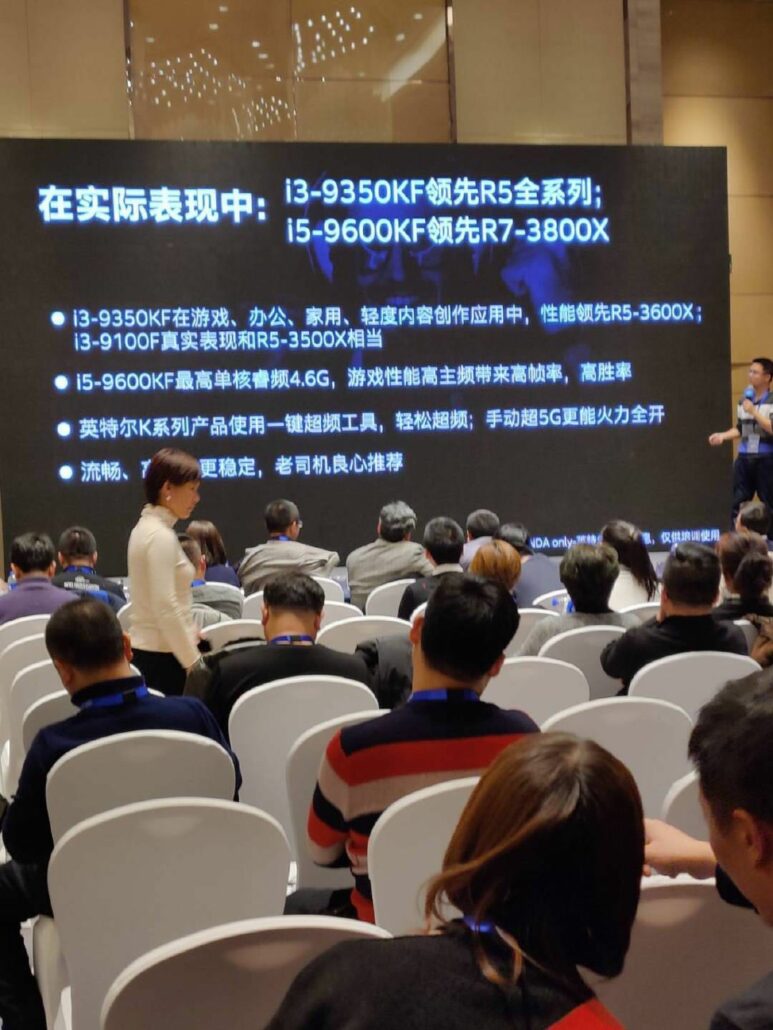 The key reason why they are stated to be better is that both KF chips stated here, boost up to 4.60 GHz and can be overclocked to 5 GHz with ease. Intel also talks about good driver support but we don't know why that matters here in these comparisons. Ok so back to the comparisons made, an Intel 6 core, non-multi-threaded chip being better than an AMD 8 core / 16 thread chip is just way too misleading. Intel has the frequency advantage but we saw in our recent benchmarks how that advantage was lost with AMD now leading the IPC charts versus many iterations of Skylake. Intel may have a slight (up to 5%) advantage in games but a 6 core / 6 thread chip leading in content creation and office workloads is just false marketing.

Or if you use Intel's 'Real-World' performance benchmarks to evaluate your chips, then I see why AMD suddenly starts to lose the edge with Intel not taking into account many performance metrics where AMD CPUs perform much better than Intel's offerings, completely crushing them.

But with that said, even Intel's own benchmark methodologies are controversial with instances of them not using the same testing environment (Drivers, Platform setup, etc) for competitor chips being witnessed in the past. And this won't be the first time Intel is using misleading benchmarks or statements to downplay the competition. They have termed several important performance metrics used by tech reviewers not indicative of actual product performance and the only ones that are, are the ones being used by them.

Intel is also comparing their non-multi-threaded Quad-core, Core i3 chips, to AMD's Ryzen 5 3000 series processors which pack up to 6 cores and 12 threads. This is after a very long time that Intel has focused attention on their Core i3 and Core i5 lineup which is being decimated by the Ryzen 3 and Ryzen 5 mainstream lineup. Once again, we see the same statements with no valid data being provided.

The Core i3-9100F mentioned in the slide is a non-overclockable chip that is being compared to an overclockable and 6 core Ryzen 5 3500X processor. Rumors have it that Intel will do anything in their power (financial horsepower), to tackle AMD's Ryzen and EPYC lineup,pending money to subsidize existing products and employing predatory pricing to fight back against AMD. AMD also markets and compares their processors to Intel's Core lineup but they have more meaningful metrics such as performance per value and cores/threads offered in each segment. (More on that here)

But one thing is set, whatever Intel markets their chips as from this point on, it won't matter to AMD much as they have a solid roadmap ahead of themselves and if Intel was thinking that the worst was over, then they surely aren't ready for 2020 and beyond considering what AMD has in their pockets with future Zen cores.

In also related news to how incompetent Intel has become, they just re-released a discontinued processor back from the 22nm Haswell era, stating that the reason is because of a new roadmap decision. If Intel's strategy is to re-release discontinued 22nm processors to make up for lost 14nm supply, then you know what hope is left for their desktop market efforts.