Remember back at Computex 2019 when Intel mentioned that they would be using real-world performance benchmarks to test their processors against competitor products, well, the company has just released several slides showing how their 9th Gen lineup is faster and better in everything except Cinebench.

Intel's real-world usage performance tests include the most popular applications that are being used by consumers. The purpose of these tests was to provide users with actual performance in applications that they would use rather than those that target a certain niche. Intel claimed that while Cinebench, a popular benchmark used by AMD and also by Intel to compare performance for their processors, is widely used by the reviewers, only 0.54% of total users have ever actually used or run it.

Now Intel has released performance data based around these 'Real-World' applications and the results are well, interesting. Once again, Intel claims that they are using the most common daily-usage applications for these tests and are a better indicator for mainstream PC experiences than something like Cinebench which target a certain niche and are better suited for high-end desktop and workstation platforms. Intel is definitely going for the mainstream numbers and given their diminishing performance and value space in the HEDT market, it's easy to tell why these tests are being released.

One of the benchmarks being used in Sysmark which includes a list of most commonly used applications or so as Intel likes to call it, Real-World apps. So coming straight to the results, Intel compared their top of the line 9th Gen Core i9 and Core i7 processors to AMD's fastest Ryzen 9 3900X. The Intel Core i9-9900K boasts 8 Cores and 16 threads while the Ryzen 9 3900X boasts 12 cores and 24 threads.

For gaming tests specifically, AMD was shown to lead only in Assassins Creed: Odyssey and Ashes of the Singularity while the Core i7-9700K fared better than its rival across multiple titles and was on-par in the rest (+/- 3%). But benchmarks weren't the only performance aspect where Intel compared their CPUs to AMD's. 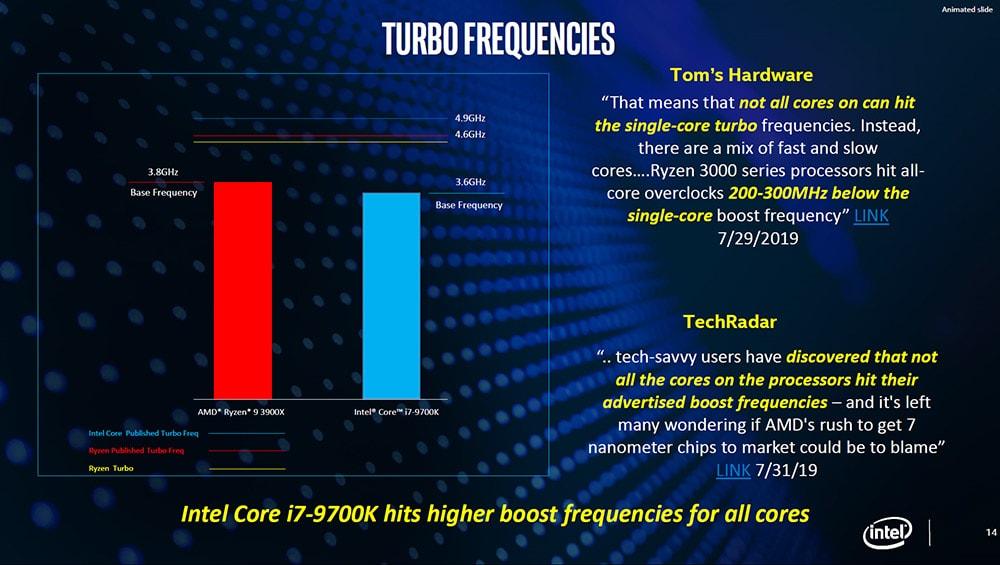 There's also a data sheet comparing the advertised and actual clocks of AMD and Intel CPUs. Intel once again claims, using snippets from various Ryzen 3000 reviews, that their processors can hit higher boost frequencies than AMD's on all cores. It is said that Ryzen processors cannot hit the same single-core frequencies for all cores when overclocked.

Now while these benchmarks are interesting, I would like to state that our own reviews for the Ryzen 3000 series processors and those from other tech outlets paint an entirely different picture. We have recognized the Ryzen 3000 parts as the most competitive lineup ever delivered by AMD, offering superb single-threaded performance increases and even better multi-threaded boosts, something that Intel is completely dismissing in their 'Real-World' tests. Again, this feels more like a publicity stunt by Intel to shift the mindset of mainstream consumers but the market share isn't in Intel's favor at the moment.

Intel: AMD Has Done A Great Job But We Still Have The Highest Performing CPUs

Reiterating what they have shown in the slides above, Intel's Troy Severson stated to PCGamesN during Gamescom 2019 that they still have the highest performing CPUs while acknowledging AMD's achievement in closing the performance gap.

“A year ago when we introduced the i9 9900K,” says Intel’s Troy Severson, “it was dubbed the fastest gaming CPU in the world. And I can honestly say nothing’s changed. It’s still the fastest gaming CPU in the world. I think you’ve heard a lot of press from the competition recently, but when we go out and actually do the real-world testing, not the synthetic benchmarks, but doing real-world testing of how these games perform on our platform, we stack the 9900K against the Ryzen 9 3900X. They’re running a 12-core part and we’re running an eight-core.”

“So, again, you are hearing a lot of stuff from our competition,” says Severson.” I’ll be very honest, very blunt, say, hey, they’ve done a great job closing the gap, but we still have the highest performing CPUs in the industry for gaming, and we’re going to maintain that edge.”

A few months back, an internal Intel memo leaked out revealing that they have been accessing AMD's progress with their Ryzen, Ryzen Threadripper, and EPYC processors, going as far as to call them a huge risk for their own CPU lineups in the coming years. In the meanwhile, AMD is taking away CPU share from Intel in all segments include servers, desktops, and notebook PCs. AMD also recently launched their 2nd Generation EPYC server processors, hitting Intel's Xeon line in almost all segments. It's not a secret anymore that Intel is stuck with 14nm for their desktop parts till 2020 while AMD would be introducing their more advanced 7nm+ the same year. Unless or until Intel makes significant strides in the desktop department, AMD will continue to remain in a dominant position against their rival.