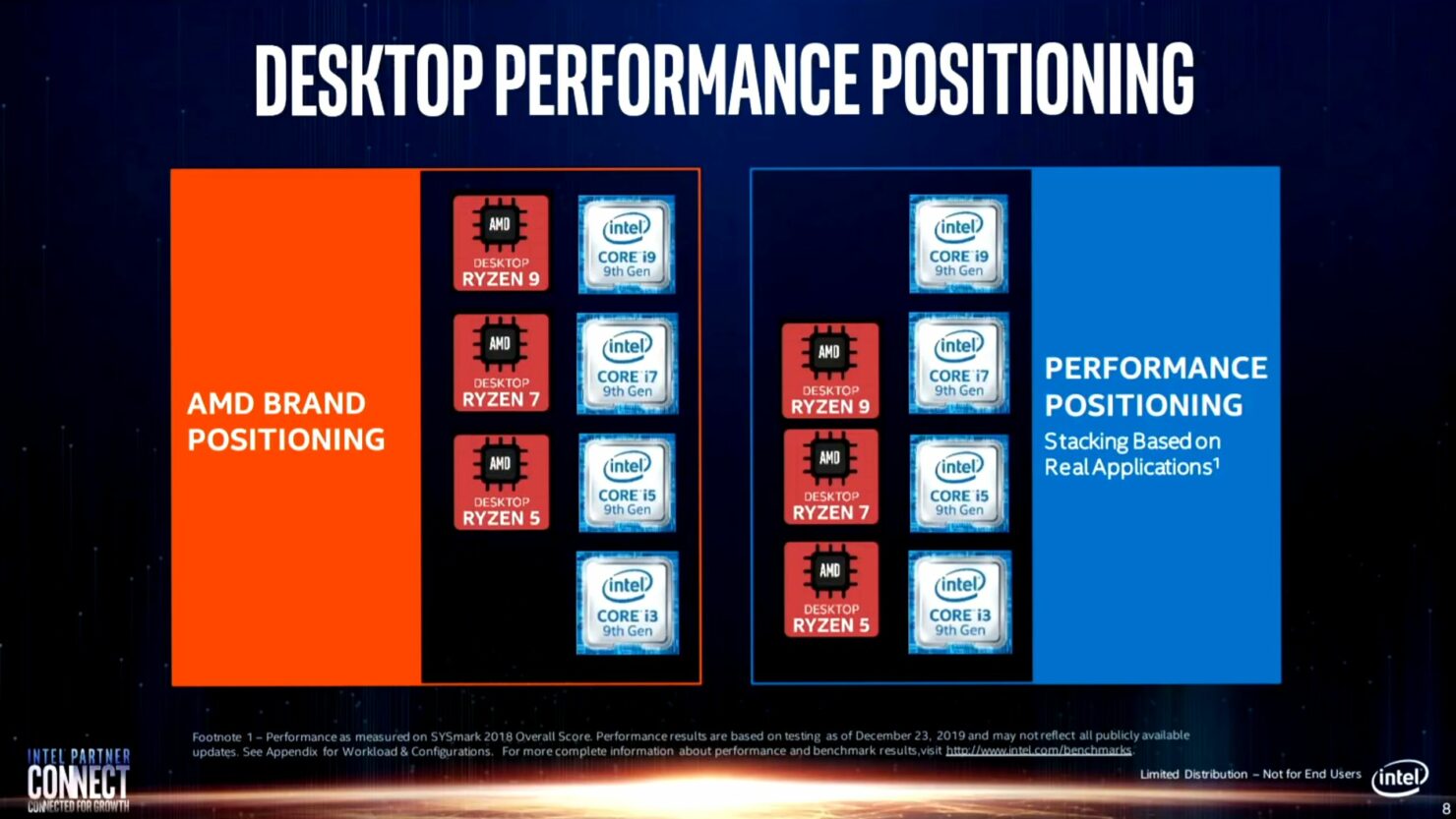 Last month, Intel's CEO stated that the industry should stop focusing at benchmarks but recent material presented in its 'Partner Connect' program reveals that the blue giant still heavily relies on CPU benchmarks over its own and competing products from AMD. Marked by controversy, Intel has once again presented its new 'Real World Performance' & 'Real World Usage' benchmarks which compare the Intel Core CPUs vs AMD Ryzen CPUs on both desktop and notebook platforms.

The slides were gathered by AdoredTV (Via Videocardz), and essentially show what Intel is internally presenting to its partners rather than end-users. The 'Intel Partner Connect' slides are intended for partners only so that they can use the material for their own presentations for the said products. It is useful in most cases with the shared specifications and differences providing partners an insight into what new to expect from Intel's latest products however, the controversial part begins with the market positioning and product benchmarks that Intel uses in its presentation.

We have already seen several instances in the past where Intel's presented benchmarks show its Core CPU family scoring huge leads against AMD Ryzen CPUs. This was only later to be found that most of the benchmarks used were tailored for Intel CPUs. Intel also had to ask the press to stop relying on Cinebench and a range of other benchmarks for CPU comparison as they don't reflect actual user experiences while going onward to show benchmarks with huge discrepancies in test conditions.

Intel has a list of applications based on their usage which show a large suite of gaming and office applications being the widely used applications on desktop PCs. At the same time, Intel shows the least used applications such as Cinema4D (Cinebench) at the very bottom considering this single benchmark shows AMD's least in both single and multi-threaded workloads compared to Intel's CPUs. Even in its disclaimer, Intel says that software and workloads used in performance tests may have been optimized for performance only on Intel CPUs which makes these tests super fishy.

On the mobility front, we can see Intel comparing its Comet Lake Core i7-10750H CPU based laptop against an AMD Ryzen 9 4900HS laptop. The Intel laptop is shown consistently ahead of the Ryzen 9 laptop in a wide variety of gaming titles with up to 23% better performance. The Intel laptop comes with a lower price point of $1299 US versus $1449 US of the AMD Ryzen based laptop. It  seems like everything is great but not until you dive deeper in the specs. Both laptops used for comparison in the tests feature a different tier RTX 2060 GPU, the one on the Intel powered MSI GL65 is the full 90 Watt variant while the one used in the ASUS ROG Zephyrus G14 is a 65W variant with lower clocks. 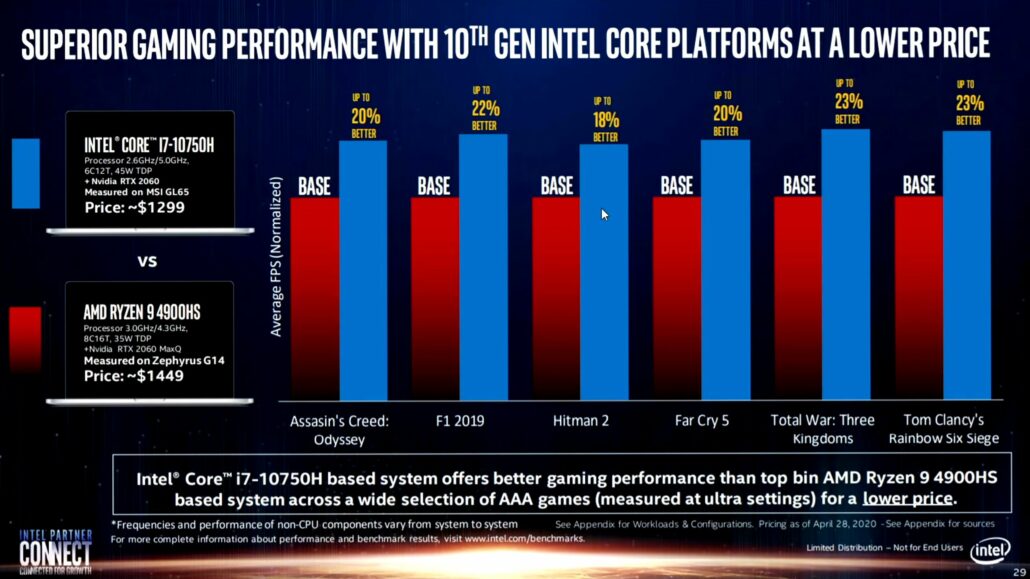 Not only this, but the two laptops feature vastly different cooling solutions with the MSI model featuring a much higher-end cooling system than the 14" ASUS ROG variant. Intel also did not bother to mention the power consumption on both systems which is something the AMD laptop would definitely be excelling it. Intel is also seemingly still trying to clear away 9th Gen inventory which is still available on retail shelves. In slides, Intel can be seeing pitting its 9th Gen CPUs in mostly gaming benchmarks against AMD's Ryzen 4000 'Renoir' APUs.

Moving on to the desktop side of things, we see probably one of the most interesting slides of the presentation. Intel's marketing and performance positioning shows that their Core i7 processors offer the same performance as AMD's Ryzen 9, Core i5 processors offer the same performance as Ryzen 7 and Core i3 processors are comfortably positioned against Ryzen 5 CPUs. Intel has also previously shown that their current generation lineup is faster than AMD Ryzen 3000 CPUs in every thing except Cinebench however, once again, they don't show the whole picture.

Again, the comparison was made between a 16 core AMD Ryzen and a 8 core Core i7 CPU. Intel says that for under $400 US, you can get absolutely fantastic gaming performance out of its CPU compared to AMD's flagship part. They don't want to mention that a person buying a 16 core CPU isn't just going to do gaming. There are perfect use-case scenarios of a high-end core count chip and a better example would be AMD's own Ryzen 7 CPUs with 8 cores which offer better multi-threaded performance than Intel CPUs while doing so at much better efficiency and even lower prices.

We also see Intel talking about the budget CPU segment where they compare the performance of its entry level Quad core, Core i3, CPUs with a Ryzen 5 3400G. Intel says that while their solution will cost higher than the competition due to an added discrete graphics cards, the system will deliver much better performance and sustained 30 FPS+ gaming at 1080p whereas an AMD system with the same discrete GPU would cost more.

Once again, Intel uses their $88 US Core i3 chip against a $136 Ryzen 5 3400G which invalidates this test considering AMD has the Ryzen 3 3100 in its CPU inventory now which offers much better performance with Zen 2 cores in a quad core package at $99 US. A slightly higher price than the Intel CPU but with more threads and much better efficiency at the end of the day.

A few months back, an internal Intel memo leaked out revealing that they have been assessing AMD's progress with their Ryzen, Ryzen Threadripper, and EPYC processors, going as far as to call them a huge risk for their own CPU lineups in the coming years. Meanwhile, AMD is taking away CPU share from Intel in all segments include servers, desktops, and notebook PCs.