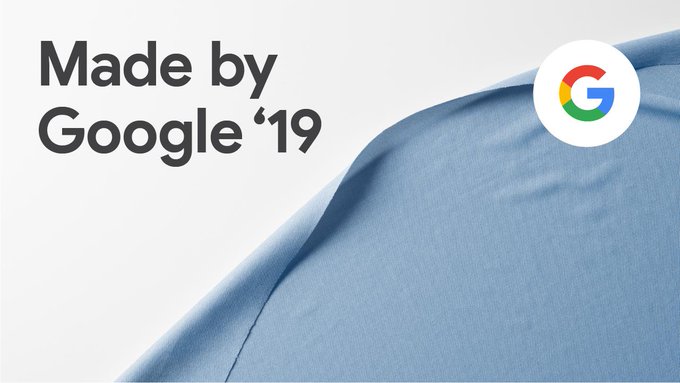 The Google Pixel 4 is (nearly) upon us, and the grand reveal is expected to take place in less than a week. It'll be reminiscent of last year, as most of the device-specific features and the entire spec sheet has already made its way online. It'll still be (somewhat) exciting nonetheless because Google is likely to reveal other products alongside their 2019 flagship. Here is a list of products we can expect to see.

The original Pixels Buds were first unveiled in 2017, and it hasn't had much success ever since. Google's product line lacks a 'fully wireless' audio solution, and a lot of Pixel enthusiasts would be thrilled to pick up a pair. Even Microsoft got in on the fun with their Surface Buds, so we see no reason why Google wouldn't, given the demand for such devices, caused in part due to the forced removal of the headphone jack

We can also expect to see some smart speakers make their debut alongside the Pixel 4. The Google Nest Mini 2 and Nest WiFI is simply a Google Home Mini and Google Home sequel. It is a part of Google's rebranding initiative where all the Google Home products are reclassified under the Nest banner. We can expect to see some incremental upgrades over its predecessors, such as a proximity sensor that reveals the volume when you approach it. Pricing is rumored to remain the same at $49. Lastly, it has a 3.5mm stereo jack.

On a similar vein, the second version of the Google Wifi, aka Nest Wifi will have Wifi beacons that double as Google Assistant speakers. It'll also come with some Wifi-specific Google Assistant functionalities, such as the ability to control your Wifi network with a voice command. It can even pause the internet in certain rooms or for specific devices. In addition to a ‘Nest Wifi Router,’ there will be new ‘Nest Wifi Point’ beacons to extend your network’s range. It will release in 3 new colors: white, blue, and light brown.

The next-generation Assistant was slated to make its debut alongside the Pixel 4 at Google I/O earlier this year. We can expect the Assistant to pick up a slew of new features which will remain exclusive to the Pixel 4 before making its way to other devices. There should be a segment dedicated to the next-generation Assistant and its features. There isn't much in the way of leaks when it comes to the new Google Assistant, and this may be the only legitimate surprise that Google may have up their sleeve.

To appease the Pixelbook fans this year, Google is expected to release a 13.3-inch touchscreen-based Pixelbook Go. We can expect it to be paired with an Intel Core m3, i5, and i7 processor with either 8GB or 16GB of RAM and 64GB, 128GB, or 256GB of storage. The most heavily-specced variant will also feature a 4K display, as opposed to the standard Full HD display on the lower-end entry models. Some of the other features will include front-firing speakers, two mics on the front, a 2MP front-facing camera that can capture 1080p at 60fps, a Titan C chip inside, the standard WiFi and Bluetooth interfaces, two USB-C port (with LED lights) and a 3.5mm headphone jack.

If things go as we anticipate, we'll have the Pixel 4, Pixelbook, and Pixel Buds. The only product lacking in the series is a Pixel Watch. However, there has been little to no buzz about this in the rumor mill, so it's either not happening or one of Google's better-guarded secrets.