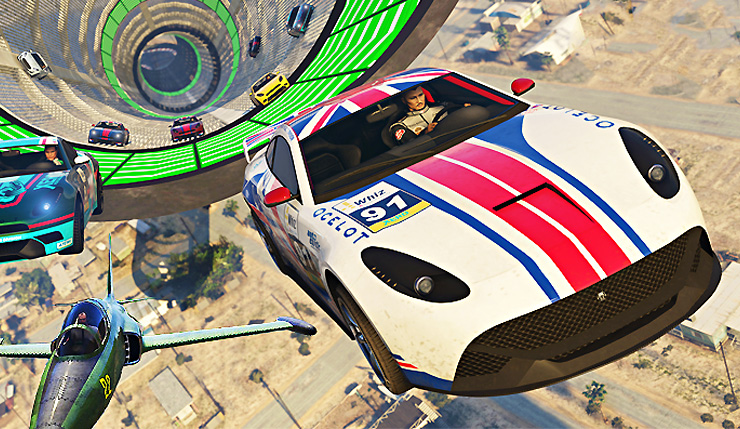 Last week Rockstar Games unveiled a variety of content coming soon to Grand Theft Auto Online, with the most significant addition being the new Transform Races, which allow you to jump seamlessly from land to sea to air. Here’s Rockstar’s official description again:

Instantly mix vehicle and race types as you switch between land, sea and air in Transform Races, the next evolution of stunt racing in GTA Online. Jump instantly from the curves of a gritty, downtown street race straight into a speeding jet high above Los Santos, then dive face first down Raton Canyon on a jet ski and more. Transform Races are new and unique stunt tracks that seamlessly transition across land, sea and air, running the gamut of available vehicle types - everything from Supers and Off-Roads, to Boats, Planes, and Helicopters - and even some skydiving thrown in for good measure.

Sounds fun, but maybe you need more than a text description to get excited? No problem – Rockstar has just released a new Transform Races trailer. Check it out, below.

The trailer provides a much clearer look at how Transform Races will play. Changing vehicles requires you to drive or fly through specific icons, at which point you’ll literally transform in a puff of smoke. I wonder though, will players be able to pick their vehicles before a race? That may be a bit tedious considering Transform Races appear to support pretty much every kind of vehicle you can imagine. In addition to the vehicle types listed above, the trailer shows off jet-skis, mountain bikes, and paragliders!

What are your thoughts? Eager to do some transforming? I never thought I’d make this comparison, but Transform Races give me a serious Diddy Kong Racing vibe, which is definitely a good thing.

The update is due to hit GTA Online on October 17th.