With the launch of the Samsung Galaxy S7 and the Samsung Galaxy S7 Edge, users and enthusiasts all around were wondering how would the device stack up against Apple's offering at the other end of the mobile spectrum. Both the devices come with Qualcomm's Snapdragon 820 and the Adreno 530; chips which are expected to set the pace for 2016 in their respective specifications and performance.

Today, we've managed to get our hands on a benchmark comparison of the Galaxy S7 Edge and the iPhone 6s Plus courtesy of Youtube user Austin Evans, so head over below to find out more. 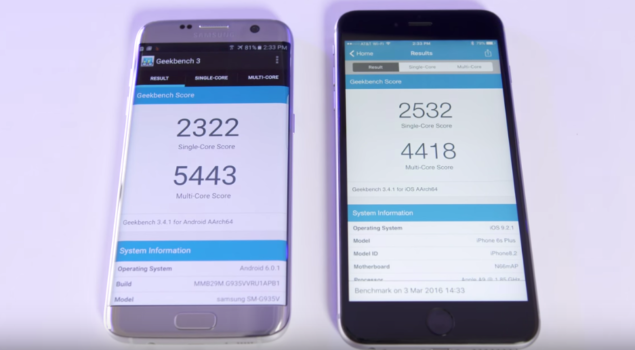 When it comes to mobile performance, both Apple and Samsung have been at the top of things for quite a while, despite their vastly different approaches. Samsung in particular has managed to shift things in high gear since the launch of the Galaxy S6 and the Galaxy S6 Edge last year. This year things are back to normal in terms of processor for the Samsung flagship, as we see Qualcomm's Snapdragon 820 and Adreno 530 return to the lineup.

So how well does the Snapdragon 820 stack up against the iPhone 6s Plus' Apple A9? Things appear to be quite balanced out overall, but the iPhone 6s Plus still manages to do surprisingly well, even though it was launched nearly 6 months before the S7 Edge. Taking a look at GeekBench scores, we see the A9 take an expected lead in single core scores, with a score of 2532 points.

In multi core results we see the Snapdragon with its Kryo cores take a good lead on the Apple A9. The 820 scores 5449 points, which should be no surprise given the processor's improved architecture and component integration; something which Qualcomm has been quite eager to remind everyone in the past. 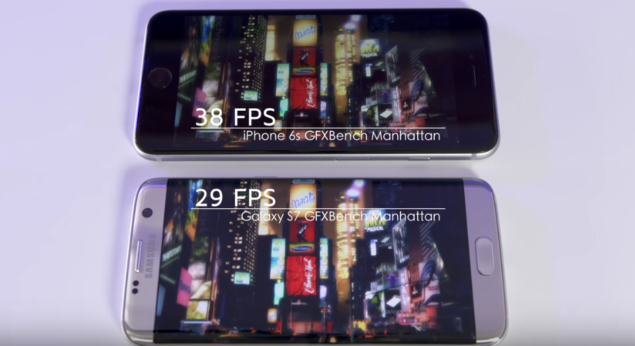 Moving over to gaming and graphics performance, we see Apple's oft criticized decision of bare minimum display resolutions come into play. The iPhone 6s Plus out does the Galaxy S7 Edge over here, with an onscreen Manhattan score of 38 Fps, a solid 9 point lead over the S7. Like we mentioned above, given that the iPhone was launched quite sometime before the S7 Edge, its consistent performance is quite impressive.

But take the screen out of the equation in tests and you'll see the Galaxy S7 Edge make a much expected comeback. Running 1080p Manhattan Offscreen tests on the Galaxy S7 Edge gives us a score of 47 fps compared to a 40 fps score for the iPhone 6s Plus. So don't completely take the Adreno 530 and Qualcomm out of the equation, but nevertheless, goes to show that higher display resolutions might not always translate into the best of performance.

To conclude, both the Galaxy S7 Edge and the iPhone 6s Plus stand pretty head to head in terms of overall performances, with both the devices dominating in their respective strengths. But given that the Galaxy S7 Edge is the newer device of the two, we'd expect it to do much better than today's scores tell us. Benchmarks' aren't a definitive indicator of a smartphone's quality, with things boiling down to preference in the end. Thoughts? Let us know what you think in the comments section below and stay tuned for the latest.