With the surprise launch of the Exynos 8890 today, we've managed to learn some official information early on about two of the most talked about chipsets over the past couple of months: Qualcomm's Snapdragon 820 and Samsung's Exynos 8890. Both of them have been manufactured by Samsung on the same manufacturing node i.e. the 14nm FinFET but come with different designs and characteristics.

Any processor launches however would be incomplete without benchmarks surfacing and today, we've also managed to get our hands on some preliminary benchmarks that compare Samsung and Qualcomm's offerings with Apple's A9, that was launched by the Cupertino manufacturer alongside the iPhone 6s and iPhone 6s Plus. 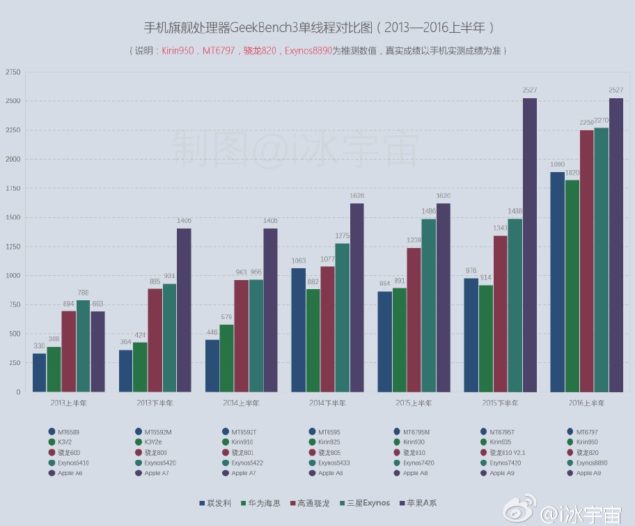 The benchmarks that have surfaced today, straight from the far East manage to compare the Exynos 8890, Snapdragon 820, Apple's A9, Huawei's Kirin 950 and MediaTek's Helio X20. This just about sums up nearly every top-tier processor in the market and even though a lot of these have just been launched, their source claims that the data given in the image above is an aggregation of thousands of scores from GeekBench.

They're also based on single core results, which obviously lends Apple and its A9 a clear advantage over the rest of the pack. Cupertino's chipsets generally perform much better when compared to other in single core tests, but given Apple's stubbornness in keeping the number of cores in its processors at a bare minimum, it looses out in multi core tests. 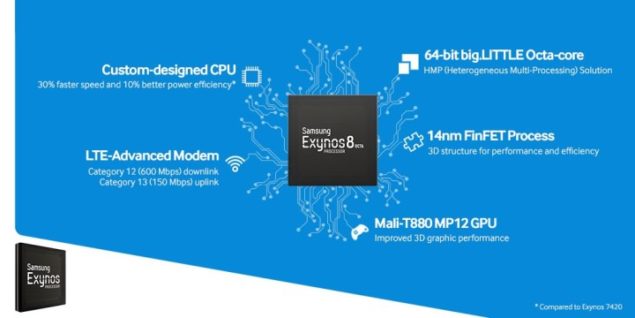 So, its not very surprising that the A9 manages to outperform every other chipset on the benchmarks list. Apple's SoC scores 2527 in the aggregated scores, which manage to give it a 257 point lead over the Exynos 8890 which manages to score 2270 points. In third place is the Snapdragon 820, with a score of 2250 that's nearly the same as Samsung's processor. In fourth and fifth place are MediaTek's Helio X20 and Huawei's Cortex A72 based Kirin 950, also launched a while back.

Give that both Samsung and Qualcomm's processors have been hyped about for quite a while, the fact that the A9 still manages to outperform them in performance benchmarks only further boosts Apple's reputation in the mobile industry. But its too early to reach any concrete conclusions on the matter as neither of the processors have appeared in any mobile device so far. Things should become clear once Samsung's Galaxy S7 is launched with both the Snapdragon and the Exynos according to information so far so stay tuned and let us know what you think in the comments section below.