With the Galaxy S20, Galaxy S20 Plus, and the Galaxy S20 Ultra all made using the same build materials, you’d think that they would be able to bear the same level of wear and tear. Unfortunately, a newly published video has something else to tell, especially after they show us the latest Galaxy S20 durability test results. Turns out that if you want a more robust flagship from Samsung, you’re going to have to spend more money in return.

SquareTrade, which is a phone insurance and repair firm, performed its ‘breakability’ test on the Galaxy S20, Galaxy S20 Plus, and the Galaxy S20 Ultra, with the video available to view on YouTube. Sadly, during the Galaxy S20 durability run, it shows that the $999 flagship cannot bear more damage than the pricier models. During the drop test, the smartphone’s display broke in the first attempt, which was at a height of 6 feet. Additionally, it was the only model out of the three that failed after the bend test was performed.

However, we shouldn’t count it out just yet as the Galaxy S20’s durability didn’t end here. The only test where it passed with flying colors was the water submersion test. While it is uncommon to see that a regular user will end up dropping their expensive flagship from a height of 6 feet, it’s a worst-case scenario provided to viewers to let them know that this will be the result should something like this actually happen.

The final scores of the Galaxy S20 durability test are given below, with a higher number meaning a more robust smartphone. It should also be noted that the $999 model is more susceptible to damage than last year’s Galaxy S10 family, which is a shame to see. 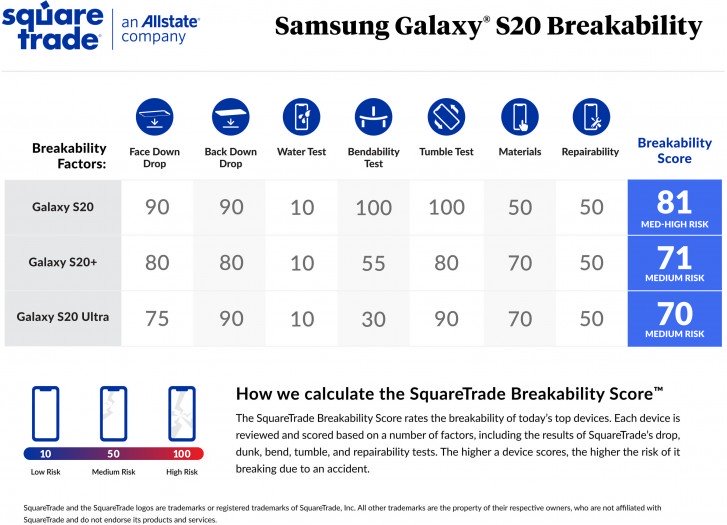 If you’re keen on getting any one of these models from 2019, you’re in luck because Samsung has lowered the price of all the models instead of choosing to outright discontinue them. If you want to check out the durability test with your own eyes, the clip is provided below.