In a previous rumor, we reported that only the Galaxy Note 10 Plus would get support for Samsung’s elusive 45W charger, but it won’t be bundled as part of the flagship’s accessories. Sadly, if you want to take advantage of the Note 10 Plus’ fast-charging capability, you’ll have to splurge extra cash for the 45W charger, and according to a new leak, the power brick is expected to cost you.

According to a new image leak from GalaxyClub, the 45W charger features the model number EP-TA845, and will be available in two colors, black and white. According to the leak, the charger carries a price of €50.90, and when using direct currency conversion, it equals $56.10, or almost $60. Keep in mind that this is what the accessory is going to cost customers in Europe, so it’s not necessary that the same currency conversion will be applied in the U.S.

How to Use Wireless Powershare on the Samsung Galaxy Note 10

However, don’t think you won’t have to pay a large sum for a charger just because you live outside of Europe. We should also remind you that Samsung will reportedly bundle a 25W charger with the Galaxy Note 10 Plus, which will be enough for a lot of customers. However, if you’re the kind of user who is consistently on the move and needs an accessory to top up the Galaxy Note 10 Plus battery a little faster, than the 45W charger purchase will come in real handy, and necessary in some cases. 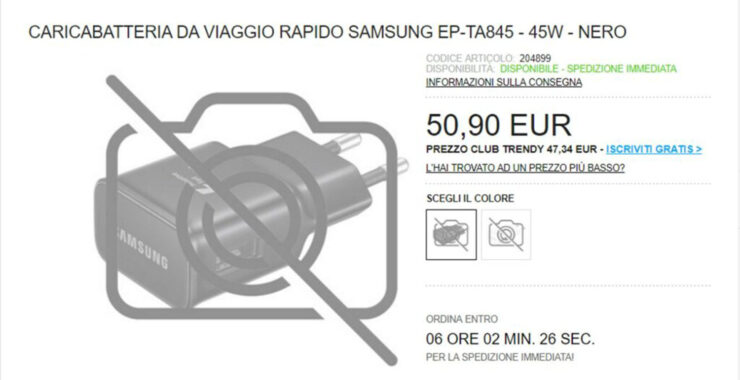 The upcoming flagship phablet will also support for fast wireless charging, but Samsung will most likely want to milk its customers, so the accessory isn’t going to be bundled with the device as well. According to previous reports, Samsung could launch a 20W wireless charging pad on August 7, and just like the 45W charging brick, don’t expect the pad to come cheap.

Hopefully, when Samsung gets down to taking pre-orders for both the Note 10 and Note 10 Plus, it could offer these two accessories as a reward for early adopters, saving a lot of customers small amounts of money. Other than that, we do expect third-party accessory manufacturers to come with their own offerings down the road, and they might be cheaper than what Samsung ends up selling, so stay tuned for these updates, and more.