While the Samsung Galaxy S10 series may already be on its way to an early Android 10 release, Galaxy Note 10 users have to remain content with beta software. The Note 10 series received its third beta One UI 2.0 update sometime last week, and today, it just got its fourth. Like its predecessor, it focuses exclusively on ironing out kinks. Here's the full changelog: 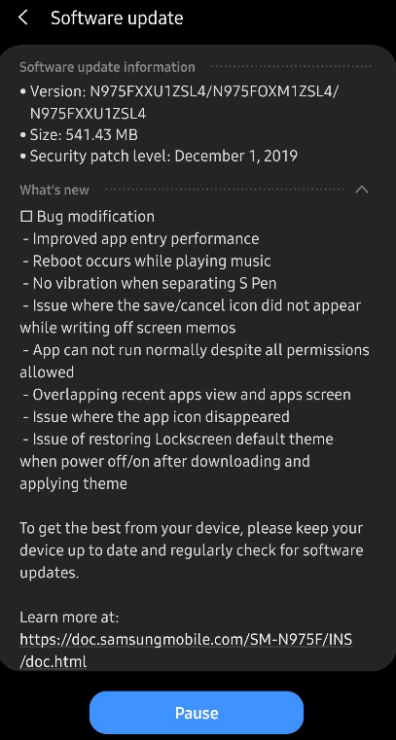 Despite its larger size at ~550 MB, the update has a lot fewer bugfixes in it. Some of the bugs addressed in this update include reboots while playing music, no vibration when separating the S Pen from its holster, an overlap between recent apps view and apps screen, apps not working properly despite being granted all requisite permissions and restoring Lockscreen themes. The previous build had to address more serious issues such as “blackened and blinking” screen, unstable connections with Bluetooth headsets and failure to display SD card files in the My Files app.

The software version for the newest beta is G97**XXU1ZSL4 and it comes with the December 2019 security patch. It is only available to participants of the One UI 2.0 beta. If you are one and want to download it on your Galaxy Note 10 or Note 10+, open the Settings app, tap Software update, then select Download and install. It may not be available to you immediately, and you will have to wait a day or two, depending on your region.

After an initial gap of a few weeks between the program's launch and its third update, the beta has been going rather smoothly. Based on the current state of affairs, we should see a fifth update drop sometime next week. There could even be a sixth and seventh update, depending on the number of bugs that need to be quashed. If things go smoothly, then Galaxy Note 10 users should receive a stable version of Android 10 in January 2020, which falls in line with Samsung's roadmap.