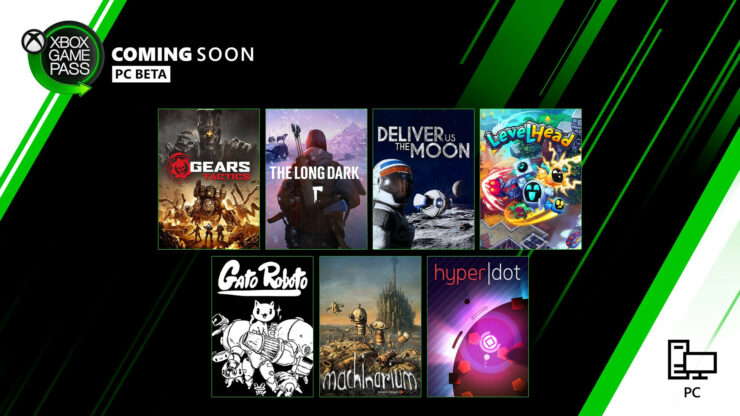 Seven new games have been confirmed to be coming soon to Xbox Game Pass for PC. The first one is Gears Tactics, though that's not really news as all Xbox Game Studios titles are automatically added to XGP on both Xbox One and PC. Let's take a look at the other titles that are about to join Xbox Game Pass for PC, then.

Deliver Us The Moon (ID@Xbox – Day One with Xbox Game Pass - featuring ray tracing and DLSS)
A Sci-Fi thriller set in an apocalyptic near future where Earth’s natural resources are depleted. A lunar colony providing a vital supply of energy has gone silent. A lone astronaut is sent to the moon on a critical mission to save humanity from extinction. Will you save mankind or be forgotten in the dark abyss of Space?

Gato Roboto (ID@Xbox – Day One with Xbox Game Pass)
Pounce inside of your cozy armored mech and set off on a dangerous trek through an alien underworld full of irritable creatures and treacherous obstacles in a valiant effort to save your stranded captain and his crashed spaceship.

HyperDot (ID@Xbox)
Experience a minimalist action arcade masterpiece with one rule: dodge everything. In HyperDot, quickly evade enemies and test your skills in over 100 hand-crafted trials during campaign mode, outlast your friends in multiplayer battles, or build complex challenges with the custom level editor.

Levelhead (ID@Xbox – Day One with Xbox Game Pass)
Build, play, share and compete in Levelhead, the platformer maker. Create incredible contraptions and machines, craft adventurous expeditions that require brain and brawn to complete, or just create a relaxing music experience. With the deep, intuitive systems of the level editor, you can create the levels of your dreams and other players’ nightmares. Supports up to four players for couch co-op mayhem!

The Long Dark (ID@Xbox)
A thoughtful, survival experience that challenges solo players to think for themselves as they explore an expansive frozen wilderness in the aftermath of a geomagnetic disaster. There are no zombies — only you, the cold, and all the threats Mother Nature can muster.

Machinarium (ID@Xbox)
An adventure game that takes you on a trip to a place fully constructed, operated and inhabited by mechanical beings. A world where you get your oil served by a robot bartender, your favorite tunes played by three robot buskers in the streets of a city governed by a robot mayor. You’re Josef, a tiny robot who’s been thrown out by the villainous Black Cap Brotherhood. Find your way back to the metropolis and solve its many puzzles and challenges to outsmart the Black Caps and rescue Josef’s friend Berta!

That said, just like with other subscription services, a few other games are also about to leave Xbox Game Pass for PC. These include The Banner Saga 2, Bomber Crew, Full Metal Furies, Ruiner, Silence: The Whispered World 2, and Smoke and Sacrifice.

The Long Dark Removed From GeForce Now – Added Without Permission