RUINER Review – You Played Yourself

It must be difficult for a new developer to make a name for themselves without having their game be directly compared to other titles in the same genre. This is precisely what Polish developers, REIKON GAMES, have been going through with RUINER. Just looking at RUINER from a basic level, it’s a top-down action shooter with a unique visual style, it features an incredible amount of violence and is being published by Devolver Digital… okay, maybe I understand where some of the comparisons are coming from.

Taking place in the cyber metropolis known as Rengkok in the year 2091, you play as a seemingly unnamed man. At points, he is referred to as 'Puppy' by his hacker friend, Her/She, but for the most part, characters in this game don't tend to use formal names. Virtuality is a big deal in 2091, and HEAVEN happen to be the leading providers of it in the Rengkok region. HEAVEN’s most popular product gives people the ability to feel real sensations in virtual worlds, but this feeling is created using human hosts. Your goal is to help Her take down the Virtuality dealers at HEAVEN. Oh, and to make matters worse, the creators of HEAVEN have captured your brother, forcing you to track him down and rescue him. 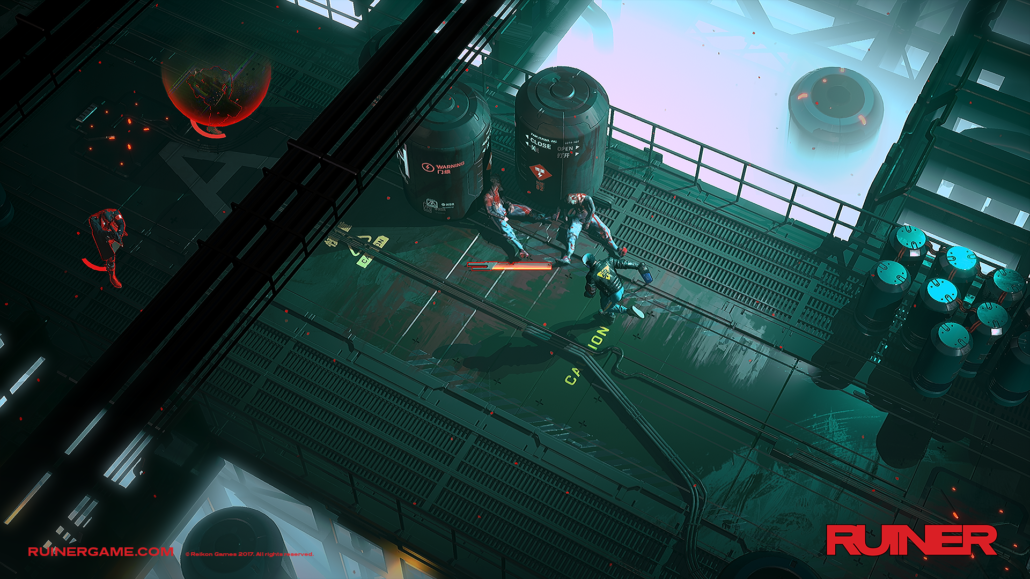 Rengkok is a fascinating, albeit small city, filled with minor details at every corner. The amount of time you spend in the city is completely up to you. In this hub world, you will find bits of information that help you piece together what type of world RUINER takes place in. You’ll also find several side quests here that encourage you to explore each of the levels in search for numerous collectibles. Though there isn’t that much to do in Rengkok, it’s certainly nice to slow down the pace and explore the city after going on a murderous rampage.

RUINER is a skill-based game and a very difficult one at that! I died countless times throughout the first half of the game, so much so that I decided to turn the game’s difficulty down to Easy. RUINER never feels unfair when you die because you know it’s completely your fault. At the beginning of the game, you are given the multi-dash ability and an Energy Shield to defend against bullets. These two abilities are incredibly powerful, and they need to be, considering how merciless the enemies are.

As the game progresses, your character has access to even more abilities, thirteen in total, with each ability having a number of upgrades. Unsurprisingly, as you grow in strength so do your enemies. You may think you understand the game after playing it for an hour, but just wait until every enemy has their own energy shield and they can teleport around the level. I promise you, this game gets very difficult! 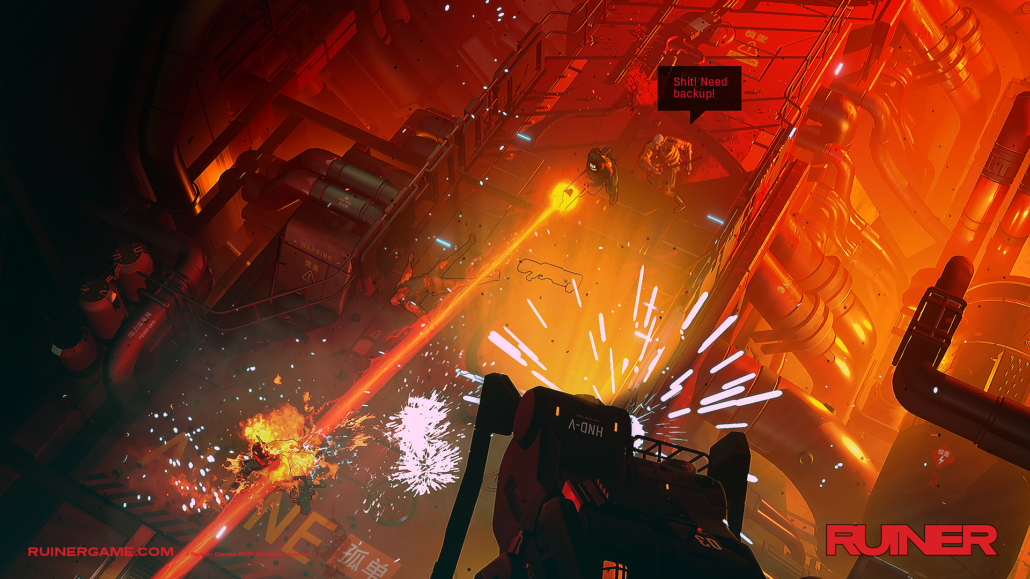 You can upgrade your abilities as you level up throughout the game. You’ll also need to collect the currency in Rengkok, known as Karma.  You can add and remove your skill points at any time, so if you feel like you’d rather have a Kinetic Barrier rather than an Energy Shield then you can swap them out. I believe it is possible to upgrade every ability in the game, though I’d imagine it would take a few playthroughs to do so. Thankfully each subsequent playthrough of the game is made significantly easier as your abilities stay with you. There’s also a level select if you need to go back to a specific stage for any of the side quests.

RUINER’s storyline is complex and, in all honesty, quite confusing. I never truly understood what was going on until the game ended, and even then it took me a while to realize what exactly was happening. This is an aspect of the game that I came to appreciate. There is obviously an emphasis on the story, but at no point does it ever spoil or interrupt the gameplay. Players looking to repeat levels won’t be bogged down by any of the story elements. While the story is interesting, sometimes you just want to play the game and that’s exactly what you are able to do.

Unreal Engine 4 typically works well for many games, RUINER being no exception to this. The game runs perfectly on my computer (6700k, GTX 1080), though this doesn’t really come as a surprise to me. I was surprised to see the game ran at 144HZ as that’s always a nice surprise when it comes to games that aren’t first person shooters. The PC version of RUINER also has the option of running at 4K resolution, which is certainly nice if you have an expensive TV or monitor.

Reviewed on PC (code provided by the publisher). RUINER is also available on PlayStation 4 and Xbox One.

For only £15/$20, you really are getting your money’s worth with RUINER. I finished my first playthrough of the game in just over four hours. It’s important to remember half of this playthrough was on Easy (meaning I rarely died) and I didn’t attempt any of the side quests. My second playthrough on Normal was much slower and I’d argue it was better thanks to the New Game Plus aspect. Even if you don’t go back to the game after finishing it once, there’s plenty in that four-hour experience for you to enjoy. RUINER is a no brainer if you are interested in fast-paced action games that require real skill to truly perfect.